LAN Party of the Damned

Two weeks ago I was sitting in my tent outside William Shatner's house trying to come up with an idea for my next update. I longed to be pregnant with thought, both metaphorically and literally as I had just gotten a small artificial womb installed on the back of my head. My cell phone rang. It was my friend, Justin, inviting me to a LAN party at his office. Justin works for Chasma Interactive Publishing, makers of fun cell phone games I love to play while waiting for William Shatner to return my calls. Sensing potential material for an update, I grabbed the compass of opportunity and set a course for adventure.

My gaming rig is a Tandy 1000 RLX. With its 286 microprocessor and instant loading program pak, it can run complex applications like Video Chess and Global Thermonuclear War. Like Tandy Computer Whiz Kids, Alec and Shanna, I am on a mission to save the environment. I plan on accomplishing this by inventing a renewable energy source powered by ghosts.

Before going to the LAN party, Justin and I stopped at a convenience store to pick up some beer. Unfortunately, I had just gotten a facelift and several botox injections and didn't look anything like the photo on my driver's license. Remembering something I had seen in the movie Teen Wolf, I walked up to the cashier and said "Give me a keg" in the deepest voice I could produce while tightening the muscle on my face that I assumed made my eyes glow. What I hadn't counted on was the scary voice making Justin cry. We spent the next 20 minutes begging the cashier not to call our parents.

"You know who must sleep really well?" Justin said. "Astronauts. They just float around in zero gravity. Ah, to sleep the sleep of astronauts."

"You are a very knowledgeable person." Justin said. "But are you ready to take on the advanced AI of Kawasaki Jet Ski Extreme, ripping out your opponent's spine and letting out a blood-curdling scream? We're all crazy here at Chasma. Crazy about jet skiing!"

I fought Justin and his co-workers, Brannen and Jeff, in a truly epic game of William Shatner's Tekwar. "I am the frag fucking master with my label gun!" I shouted.

"Shut up or I'll put on my Zombie Johnny Cash mask."

"Oh whatever, that mask doesn't even scare me anymore."

"Hey Brannen, I've got a great idea for a cell phone game." I said. "You're Dennis the Menace, right, and you've died and gone to hell where you fight Problem Child to determine which ultimate destroyer will arise from hell and ready earth for the apocalypse."

"Great! Do you have casual fridays? Because sometimes I like to wear a leather thong and pretend I'm Japanese superhero, Cutey Honey."

"It was good while it lasted."

I put on my lobster hat to symbolize my dominance of all things Tekwar. "Ooh, a lobster hat. How original." Jeff said.

"Hey, I was into lobster hats way before it became cool to wear them." I said. "It's not my fault the hipsters keep co-opting all the hats I like."

"We need to play Far Cry." Justin said. "It's a sensuous experience a thousand times greater than an orgasm."

"Imagine a ball pit as big as a tennis court filled with balls of every color of the rainbow."

Our elite commando unit fanned out across the virtual jungle. Justin directed us toward a clearing in the foliage using subtle body language known only to seasoned killing simulation veterans such as ourselves.

"This sucks. Let's play Planetside instead."

"I like this tropical island setting. It reminds me of that Jimmy Buffett song about giving up all your material possessions to live on an island in the caribbean."

"Uh, you just described every song Jimmy Buffett has ever written."

"Don't be hating on Jimmy Buffett. He's sold more albums than John Romero has had sex. With himself."

"Hey Brannen, remember when you fired me? Well, I don't need your crappy job anyway because I just signed up for the Umbrella corporation's executive training program. Do you know what that means? It means that in a few years I could make assistant zombie lab manager. Then I'll be making enough money to buy and sell pathetic worker drones like yourself." 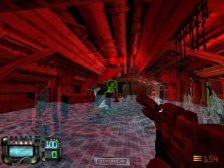 The next game we played was Gunman Chronicles, a futuristic epic featuring explosions and most of the red lighting from Aliens.

"Wow, I had no idea the future would suck this much."

"You probably thought the future would be all rocketships and capes, didn't you? Well, I have seen the future and the future isn't about fun. The future is the look frozen on your best friend's face when you pull his charred corpse out of a pile of scrap metal and sourceless colored lighting. The future is the horror in your eyes when you realize the human-sized air duct you just climbed into is full of giant spiders with purple iridescent blood."

"Guys, I'm abstaining from playing. I object to the pro-slavery overtones of the Gunmen's confederate army uniforms."

"Shut up, Jed, and stop tapping Knuckles's theme from Sonic the Hedgehog 3 on your table. No one here thinks you're cool. Oh, now you're tapping it on the back of my head, huh? Fine, just keep that up. As soon as this game is over I'm going to punch you in the face and then your face will swell up so much it'll look like it's growing its own ass."

The last thing I remember before passing out was standing on a table saying something about a dune buggy race around the world. If there's a moral attached to this rambling incoherent mess of a story, it's that Keystone Light should not be consumed by anyone ever. I'm pretty sure it consists of distilled redneck piss mixed with iodine.

As we all know, musicians can be a weird bunch. Michael Jackson, Janet Jackson, Tito Jackson. You get the idea, they're nuts. So it's not terribly hard to see them break out of their usual music genre and go totally freaking nuts. Madonna the nun? Done. The Dixie Chicks good? Done. Superman and Batman singing acapella? That really doesn't fit here but ok, done.

Thanks to forum Goon Liquidex for starting up the thread that spawned this Comedy Goldmine. Sleep deprived euphoria, here I come. Right back where I started from.