I Am the Answer Man

Enter the Contest You Filthy Cretins!

So far about 3/4ths of the entries for "The 2004 J-List and Something Awful Mega Kawaii Contest Prize Bucks Super-Saiyan Extravaganza!" have really sucked. That means everyone who has missed the contest or has been putting off entering should immediately follow this amazing underlined text link, read the rules, and enter the goddamn contest. I am sick out of my mind of looking at infant-quality MS Paint drawings of Pikachu and a tank.

I Am the Answer Man 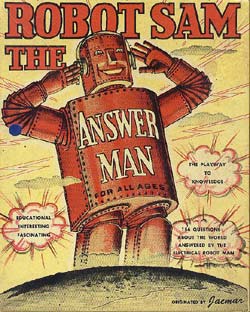 I'm not Robot Sam, but I do have a lot of answers.I have a number of hobbies to keep me busy in between boring introspective articles and lame jokes about videogames. Many of these hobbies would not interest most of you, our beloved readers, but possibly my favorite hobby of all is answering questions. I can spend hours on end just sitting there and providing snappy answers to virtually any question posed to me. Unfortunately, I don't actually have the correct answers to any of these questions.

To demonstrate this and partake in my love of answers I gave an open invitation to all of the readers on the SA Forums to ask me any question. To my delight the questions came fast and furiously like a Vin Diesel strapped to the hood of a riced-out Lancer. At the conclusion of this stimulating Q&A session I distilled the highlights, which I present to you now.

Q. "How many licks does it take to get to the center of a tootsie roll pop?" - Kezef

Q. "Why doesn't anyone on 'Friends' look like me?" - TheMadMadman

A. To everyone else they do look like you, but when you travel back in time as you have there is great risk involved in seeing yourself. It might make you black out or it might kill you instantly. Your wranglers installed a chip in your brain that replaces all images of yourself with 3D renderings of King Hippo from "Mike Tyson's Punch Out".

Q. "What do you predict would have happened if the Germans had won in North Africa?" - dick jokes

A. I will give you a totally accurate answer:

If the DAK had captured North Africa then we would all be speaking Chinese. And doing a lot of dancing.

Q. "What was the craziest WWII vehicle that was never produced, but was conceived of?" - Antrodemus

A. The craziest World War II concept vehicle that was never produced was definitely the SdKfz-233. I mean TWO machineguns? That's craziness!

A. The Walt Disney Corporation

Q. "How exactly do I go about summoning a demon from the 7th circle of Hell?" - Green

A. The process is very simple.

Q. "Please explain the basics of fair isle (aka "picture") knitting in less than 4 steps." - Ozma

A. This process is also very simple.Wait, FUCK! Four steps?! 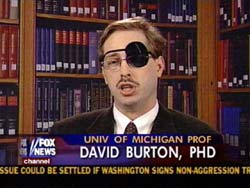 Dr. Burton probably has some of the answers, but not nearly as many as me.Q. "WTF why do I have only one Bengay patch left in the box?" - zwoisnon

A. Molest children and then do push-ups until you vomit.

Q. "When is a Go-229 finally going to make it's long-overdue maiden flight?" - Solothurn

Q. "Are you kidding?" - moneyandrobots

A. I'm not sure, but I am deadly serious about Beggin' Strips.

Q. "In your opinion, what would happen if the tiny nation of Andora suddenly developed the technology to build anti-matter based weaponry and giant mechanized robot combat vehicles and became increasingly hostile towards the rest of the western world.

Do you think they could make it all the way to the United States before people realized they're essentially french anyway?" - moneyandrobots

A. Honey just sleep through it. Take some Pepcid and they will go away.

Q. "What does Marsellus Wallace look like?" - John Fütbol

A. A 19th century train's cowcatcher, which explains why I tried to fuck him like one.

Q. "What would Americans be wearing on their heads if we had lost WW2? Is chicken pot pie or a turkey sandwich a better dinner option?" - Run_The_Shadows

A. Customized X-boxs that feature vinyl appliqués of Gadget from Rescue Rangers and dinner is for cowards. 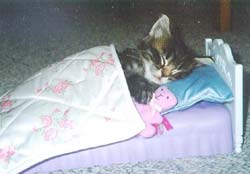 This adorable kitten cuddlenapping in a dolly bed probably has a lot more answers than you would think.Q. "How much do I weigh? How old am I? How much does my wife weigh? How old is my wife? What color are my lungs?" - TheLorax

Q. "Stacey's boyfriend just broke up with her and now she is heartbroken because she feels her crush on Mark caused the whole fiasco. To add a little to the incident, Mark has had a crush on Hillary while going out with Steficus (Staceys best friend) for over a year now. Everyone is very distressed because the 80's dance at school was canceled due to not enough tickets being sold but the thing is, DECA members were going to buy their tickets on the last day! The 80's dance coordinators (see also: Brittney Mohler) do not know what they are doing and can not accurately predict the DECA ticket sales on the last day. On a constructive tangent, Brittney Mohler is extremely hot yet refuses to dress in the hype of fashion due to some kind of trade embargo situation with normal stores, or maybe its just some odd fixation with the local thrift store. She is not Mexican btw. Anyway, Stacey is wondering what she should do about her boyfriend and whether or not she should fall into his trap and go out with him or if they should just date for a while or if she should consider Hillary's views on the topic. Thanks in advance!" - spinflip

A. I feel Stacey's pain and totally understand what she is going through. I had a good friend who was killed on an aircraft carrier while standing too close to an arresting wire and I totally wanted him to split me like wet pine. My advice is to buy deer musk and apply it to Stacey's vagina and then wait to be shot by a passing hunter.

A. No baby, you're pleasingly plump. Of course I love you baby.

Q. "Does this look infected?" - Gravitee

A. I'm sorry but your baby is dead.

A. If affirmative action is anything like drag racing then HELL YEAH!

Q. "If a train left New York at 3:00pm travelling west at 50mph and at 4:00 a train left Los Angeles at travelling east at 40mph, which direction would the egg fall off the roof?" - TheMadMadman

A. It depends on the power of prayer.

A. Jamie Lee Curtis has a fully developed penis and testicles between her legs. She also has eleven infant vaginas on her back. I'll let America be the judge.

Q. "Why am I allergic to egg white? I throw up when I eat them, and sometimes my throat closes up and I could maybe even die." - Myrddin Emrys

A. You may not be allergic to egg white. The best way to find out for certain is to insert a long funnel into your esophagus and pour a gallon of egg whites down your throat. 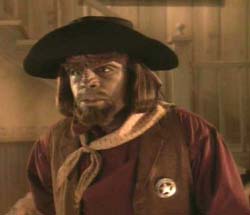 Cowboy Klingon has NO answers. Don't even try with him. Seriously, that guy...oh but that's for another day.Q. "If you and Jack went horseback riding and Jack helped you off the horse, would you help Jack off the horse?" - TheMadMadman

Q. "Can somebody tell me what Christmas is all about???" - Y2Kdogg

A. Christmas is what a man and a woman who love each other very much do in the privacy of a bank vault.

A. She will flare her comb and begin emitting a constant low-frequency tone from her vagina.

A. Because they are made out of man's best friend; The Orc.

A. Your church attendance has lapsed.

Q. "If you take a shit and there's no toilet paper left, what do you do?" - SeñorMisterioso

Q. "Who would win in an American Gladiators style Pole Jousting competition, Destro or Hitler?" - sba

A. Hitler would definitely win because of his devoted study of Krav Maga.

A. The enchanting harmonica playing of John Popper.

Q. "Will you give me a million dollars provided that I change my name to Senior Trashbear?" - AceEbb

A. No, but I will give you thirteen million dollars provided that you change your name to Senator Trashbear

A. Chips are delicious; daddy not so delicious. Chips are bad at tucking me in at night; daddy will read me a story. Advantage: Daddy. Consequently this is the title of my next book.

Q. "How do they cram all that graham?" - Frolixo

A. Pneumatic pumps and lots of technical animal fat.

Q. "When is this rash going to go away?" - Cloneborg

A. When you finally stop wanting it back.

Q. "Mexicans, is there anything they can't do?" - Meatgrinder

I hope you have enjoyed this "best of horrible answers" session. As a brilliant means of generating more content I now extend an offer to conclude this series on Monday with an exciting reader Q&A! Just send in your questions along with a self-addressed stamped envelope to zackparsons@somethingawful.com and I will begin the flow of innacurate date once again.

Hi guys, its your old enemy Livestock here. I just got back from the comedy factory where the SA Forum Goons have finished putting together their latest Phriday lineup. This week we explore the dangers of product placement in movies, particularly when your movie is about Jesus. "The Passions of the Christ," in spite of all its praise, gets hit hard. It certainly wasn't the follow-up to "Beyond Thunderdome" I expected, but what can you do. I'm just going to throw a second link out and hope that by now we've reached a point in our relationship where I don't have to try to sell these features to you anymore.