The Majestic Splendor and Glory of Hiking 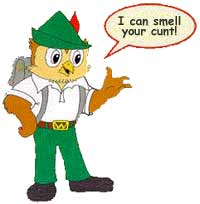 Contrary to popular belief, I'm not an elderly paraplegic woman with an intense hatred towards the more able-bodied and youthful members of humanity. I don't know how that myth got started, but it's one that hardly holds up, especially when I'm out doing things no ordinary elderly paraplegic woman could do. One thing I like to do is go hiking, an act that requires the explicit usage of functional legs. I have not just one, but two such limbs, which I use in a process called walking. This process is what I believe keeps me fit as a fiddle and higher up on the food chain than snakes and eels, two popular quadriplegic varieties of animal. Hiking is by no means a pedestrian activity, as it requires great stamina, a willingness to move, and all but necessitates leg coordination. These are things the common man is often incapable of, thanks in part to the muscle destroying power of television, cars, and those deadly blood clots that kill millions of airline passengers each year. Because I believe that hiking is something that should be understand and not feared, though dark and mysterious it may be, I'm dedicating this entire update to the topic of gun control. Wait, no, fooled you! We're talking about hiking.

Hiking was invented in the 1950s by Professor Bernard Hikenson, a con artist who trampled on social norms by once walking on the rugged grass adjacent to a sidewalk. His unorthodox behavior spread, and soon others were daring to walk where sidewalks and roadways feared to settle. Since then, hiking has become a beloved pastime, because unlike sports, it requires little more than deliberate and calculated leg movement. With hiking you don't have to catch any balls or tackle anyone, and I find that comforting, since my premature rigor mortis makes it difficult for me to do anything that requires hand-eye coordination or minute amounts of strength. But hiking is universal and requires very little if any training. Everyone from cocaine addicts to super-powered rocket popes can roam freely about the hiking trails of the world, so long as they don't mind being right smack in the midst of the great outdoors.

Not only is hiking easy, but it's also cheap and requires precious few supplies. At the most, you'll only need the following items:

Grappling hook (for hiking up walls).

Shoes (we are not cavemen).

Bottled water (to wet down your shirt so as to give the illusion you somehow worked up a sweat walking).

A cell phone (to call for help in case you get lost or fall down and need some help getting back up).

A bag of popcorn (to mark your path so that you can find your way back).

Scroll of Town Portal (for when things start to get hairy).

Hazmat suit (to protect against ticks and mosquitoes).

A walking stick (so that you look stupid). 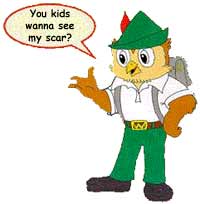 Some people will try to tell you that you can hike anywhere. For example, if you have ever gone to a shopping mall in the morning, you may have heard the sounds of artificial legs creaking, walkers rattling, and haunting moans emanating from strained elderly vocal chords. These are not the sounds of some macabre marching band holding a pep rally for death. No, these are sounds of the mall walkers, an ancient race of humans lost forever to the passage of time. Yes, they certainly are walking, but by no means are they hiking. Hiking takes place outdoors, far from the pleasant indoor atmosphere of the shopping malls, where the cursed people dwell.

Native Americans might tell you that nature is sacred and should be respected, but fear not, for in our society it is perfectly acceptable to treat her like a dirty bitch. Just not when you are hiking, unfortunately. Since state parks and other hiking destinations of the like tend to have strong laws that prevent you from, oh, say, building a log cabin or dumping bags of trash, you best just look and not touch. On that note, there are some simple rules you need to follow when hiking, as ordained by Woodsy the Owl, the modern manmade God of Nature: 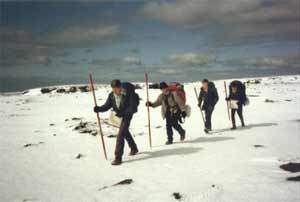 Give a hoot, don't pollute. If you have trash, don't be brash. Don't do the crime if you can't do the time. Don't talk the talk if you can't walk the walk. Throw it in a garbage can, asshole. Introducing foreign elements such as trash into nature can have unpredictable consequences, especially if that trash is a leaking canister of mutagen ooze.

Do not touch or move any sticks, twigs, leaves, rocks, or anything else for that matter, otherwise you will disrupt the natural humus. Should you accidentally brush against a stick or twig, immediately call a ranger for help. There will be some paperwork and forms to fill out, and some jail time as well, but it's best to get that straightened out.

If you encounter a wounded animal, do not touch it. Instead poke it with your walking stick. If the animal reacts negatively to you poking it, then the animal is perfectly sane and therefore in no need of help. However, if it reacts favorably to the poking, the animal is clearly mad, and you must then cremate it using whatever resources you have available.

If you encounter a hostile animal, cast a lulling spell and quickly leave the area. If you have no mana, pretend to be dead. Even as the animal tears into your flesh with its menacing teeth and claws, pretend to be dead. Keep pretending to be dead until you are dead. You had your chance and you blew it.

Watch out for scorpions! They can teleport, spear you, and spit fire.

At no point should you ever detonate an explosive or eat dingleberries.

It is a crime to go into the woods, slowly kneel, smell the fresh air, gaze all about in admiration of nature, only to then stand back up again and take a deep breath. Don't even think about doing such a horrible thing.

If you have to go to the bathroom, do so in your pants and not on or around the trails. If anybody asks why you appear wet or to be carrying a load, make up an elaborate excuse such as, "I wanted to get a picture of a badger wearing my clothes, but when I put them on him, he had an accident. Naturally I couldn't walk out of the woods naked!" If this excuse doesn't suffice, start running away. Nobody goes for a walk on his or her toilet, so don't try to make the places where you walk into a toilet.

There is a lot of sightseeing to be had from hiking. The rustic environments can be mighty inspiring as the colorful greens bathe in the intrepid blue of the sky, which is located directly above the ground. As pretty as the sky is, it can hardly compete with the wonderful varieties of trees and plants, the remarkable rock formations, the peaceful streams, and the countless unmarked graves of murdered prostitutes. The gentle noise of the outdoors, eerily similar sounding to one of those "Sounds of Nature" relaxation tapes, can be quite comforting as well. But beyond the beauty of the setting, the most important part of hiking is getting exercise. If you're an American, chances are you need it very bad, because you're going to die very soon from obesity. Get off your coach, put that half-eaten ham back in the fridge, and go get some goddamn exercise! You can take it from me – this hiking business is worth the effort!

Hey there cats and kittens, it's me, Ben "Grabowski" Platt here with a movie review. This time we're taking a look at the "Blair Witch" wannabe, "Strawberry Estates." It's a fun-filled romp, as long as you consider being in a coma to be strenuous aerobic exercise.

"Strawberry Estates" was released in 1997, two years before its clear counterpart, "The Blair Witch Project." However, that was still not before "The Blair Witch" was shot or before its massive hype began. By that point, there were already articles in newspapers and magazines talking about the independent horror film that would revolutionize the genre by making its story about three kids lost in the woods seem entirely realistic. When Ron Bonk heard that news, he was struck by inspiration. "By golly," he said, "I'm going to steal that idea, or my name isn't Ron Bonk!" And how did the esteemed Mr. Bonk accomplish this feat? Simple. Whereas "The Blair Witch Project" took years to piece together from all of the extra footage and useless bits that the three randomly selected "actors" managed to capture while out in the Burkittesville woods, Ron Bonk skipped all of that hassle by actually putting together a script for his actors and just asking them to pretend like it's all spontaneous, thus eliminating the need to pare down the usable material. Naturally, the end result is a badly-scripted piece of schlock with actors doing the worst job they can muster. Hooray for independent cinema!

Frankly, I'm sick of this movie! I now inflict its horror upon you! Enjoy!