The 24 Coolest Things I've Ever Done

I finally got around to turning 24 yesterday. It was a long, arduous task, but I'm proud to say I passed through my 23rd year on the planet unscathed. My unemployment streak (which is approaching world record status) is still wonderfully unblemished, and I've come to find professors are much more sympathetic about multiple absences when you accidentally mispronounce "I needed to level my Mage to 60" as "I contracted Lupus when I wrecked my car trying to save a burning orphanage on the way to my grandmother's funeral."

But I know it's all downhill from here. The year between 23 and 24 is the line between probation and prison time for dating high schoolers. Women my age are starting the brutal trek from 24 to 25, where even the hottest coed suddenly forgets how to wear makeup and can't go three sentences without using the term "my kid". I am sure my transition will be just as unforgiving: One second I'll be doing homework and thinking about watching a movie, the next, making hotel reservations with my horse-faced secretary, whose beauty seems to grow at the exact same rate as my wife's thighs. 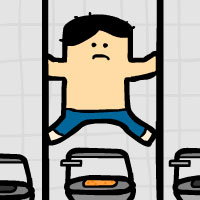 It's alright, though. When I finally succumb to the ravages of pre-midlife mediocrity, I'll go with a smile. Why? Because I've done a ton of cool shit in my life. If more people knew me they'd call people my age "The Greatest Generation" based on my experiences alone. I'm not one to one-up a so-called "hero" who lives off my taxes because he spent most of his twenties in some European bunker but believe me when I say I could if I wanted to.

In honor of my 24th birthday I've gone to the trouble of compiling a list of the 24 coolest things I've ever done. No need to thank me; your riotous laughter will be more than enough. That and gift cards to popular online retailers. I'm told I have to say this is a joke if I mention it, so please keep in mind that I was kidding and I would in no way appreciate free money from total strangers. Not a bit. Now get to reading this list and "ironically" putting your credit card information in that Amazon box so I can "jokingly" buy myself some shit. Ha! 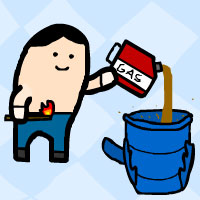 1. Won first prize in a pep rally "school spirit" contest by taking pictures of players from the opposing team, cutting their heads out, and sticking them on styrofoam "stakes".

2. Slapped the president of a community college on the ass and shouted "go team" at him.

3. Told a semi-autistic kid in my apartment complex that the girl down the hall (who he was in love with) needed his help with "Return to Castle Wolfenstein" but was too shy to ask him. He printed out the entire GameFAQs FAQ, signed it, and slid it under her door.

4. Sprayed my dad in the eye with brake cleaner and lit him on fire as we tried to turn my Airzooka into a flamethrower. I was 20 years old at the time.


5. Was nearly killed in Indianapolis after my friend honked his horn (which played "The Battle Hymn of the Republic") at a bunch of black guys.

6. Told a Wal-Mart manager to "shut the fuck up and let me watch television" after eating mushrooms, walking to the store to get some soda, and staring at moving patterns in the floor for the better part of an hour.

7. Watched a fat girl fall through a cheap, tacked-on wall at a college party; was laughing too hard to help her despite her kicking her chubby ankles in the air and shouting "help me." 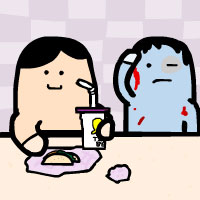 8. Hit the lead singer of Mindless Self Indulgence in the face with a shoe at a concert.

9. Spent the better part of a week in the third grade purposely saying "cunt" instead of "can't" until they sent me to speech therapy.

10. Convinced a grocery store cashier to sell me cigarettes despite the fact that I was underage because "my dad would beat my ass" if I didn't bring any home.

11. Watched my friend get his ass kicked at an underground "fight club"; made him take me to Taco Bell before he drove himself to the hospital to get stitches.

12. Told a girl whose father hung himself "your dad killed himself because of you" when she cut me in a lunch line.