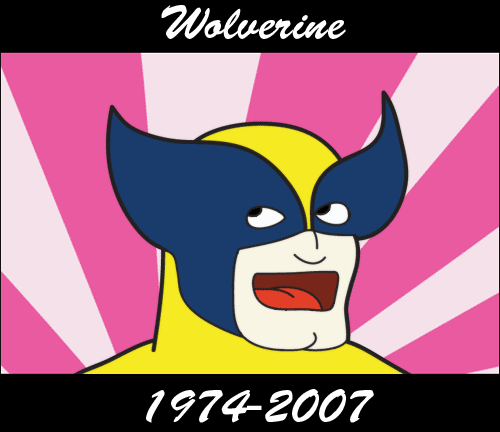 Wolverine is dead. After slipping in the shower and hitting his head in the newest issue of his comic, our most played-out superhero has departed this world for the big guest appearance in the sky. Marvel has confirmed that no attempt will be made to resurrect the character. He is gone for good.

In memory of the Wolverine we all grew up with, let us reflect upon some of his finest comic book appearances and hope that there are bad guys in heaven just waiting to be called "bub" before being eviscerated with their backs tastefully turned toward the reader so their gaping wounds aren't shown. 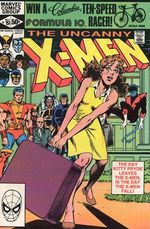 When Professor X bans cheap beer from the mansion, Wolverine has only one option: escape at all costs!

Key Moment
Wolverine: Come oooon! This is taking forever, you loopy broad!
Kitty Pryde: You're too... heavy! It's been twenty minutes and I haven't even reached the front door. I think they're starting to suspect something is in my suitcase.
Wolverine: Just tell them you're incredibly weak. They'll buy it, you're a girl.
Kitty Pryde: (sobbing) 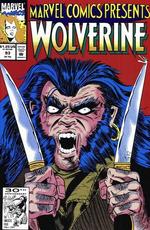 Wolverine is invited to dinner with the president, but can the wild beast be tamed in time? Can etiquette win out over years of savagery?

Key Moment
Storm: Logan, those are both knives. Put them down.
Wolverine: All you need in this world is a sharp blade, bub. Trust me.
Storm: Maybe, but this is tomato soup. You can't cut tomato soup.
Wolverine: Maybe not, but I can... CUT THE BOWL!
Storm: Oh god.
Wolverine: See? Muscles and brains. 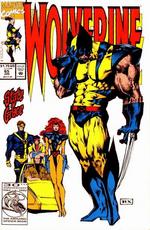 "Ashamed Of Shrinking The X-Men"
Wolverine #65

Thinking a button on the danger room control panel is there to order Pay-Per-View pornography, Wolverine presses it and discovers the button's true purpose: firing a shrink ray. With the rest of the X-Men now one third of their original size, where will the team go from here?

Key Moment
Wolverine: I can't believe I did this to you guys. I am so sorry. Stupid stupid stupid!
Professor X: It's quite alright, Logan. Just hit the "Reverse" button to reverse the ray's effects and return us to our proper size. We can't quite reach it ourselves.
Wolverine: Oh, the shame of it! I have to take Cyclops' motorcycle and wander around the Canadian countryside while thinking about my mysterious past until this all blows over!
Jean Grey: Logan, the button! Logan!
Professor X: He has made up his mind, Jean. Now we must decide which one of us will perish to keep the rest from starving.