These days, the story behind a brand is almost as important as the product or service it offers. But it's hard to come up with original and compelling brand stories in such a crowded market. That's why I propose advertisers repurpose the tried-and-true stories of classic literature. To illustrate, here are some classic literary plots paired with popular brands.

After surviving the bombing of Dresden, Billy Pilgrim sees two horses dying of thirst and cries for the first time in the entire war. He resolves to spend the rest of his life battling thirst and founds the Pepsi-Cola Company.

The Catcher in the Rye

Holden Caulfield despises the greed and hypocrisy of the adult world and wishes it were possible to remain a child forever. This motivates him to invent Loot Crates.

Like the rest of the lost generation, Jake Barnes struggles to impose value on the anomie of post-war life. When this fails, he wishes he could at least organize revenue values into easy-to-read charts. This gives him the idea for Microsoft Excel.

After his longwinded, profanity-filled rant to his therapist about his mother, his childhood and his sexual proclivities, Alexander Portnoy wonders if other people have the same need to endlessly complain about their personal lives to people they don't really know. The next day, he registers livejournal.com. 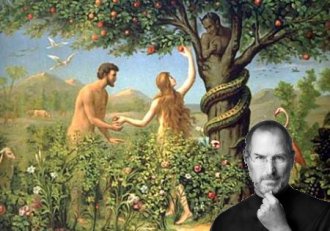 Satan, disguised as a serpent, tricks Eve into taking a bite from the apple of knowledge, causing the fall of man. Steve Jobs sees this and gets the idea for the Apple logo.

Sal Paradise hitchhikes across the country in search of the American dream but gets discouraged by the difficulty of finding rides. He aborts his trip and starts Uber instead.

Professor Charles Kinbote annotates his deceased friend John Shade's posthumous poem "Pale Fire," telling a completely unrelated story in the process. He just wishes it were possible to store, edit and share his notes across desktop and mobile platforms. This inspires him to found Evernote.