Livin' in a Dictator's Paradise 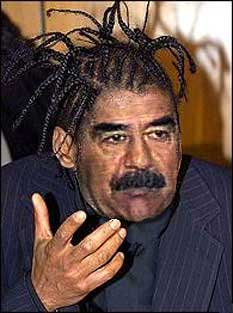 Saddam prepares to go into the studio and cut his vocals.Those of you who follow the minor news related to the recent war in Iraq might have noticed a story about the CIA broadcasting an insulting rap song about Saddam Hussein on their radio airplane. While this may seem like a fairly good idea if you're say drunk or waging a war against a rival gangsta rapper when you're fighting a real war it seems a little silly. Oh how wrong I was! Set to the tune of "Gangsta's Paradise" this rap is roughly two minutes of distilled pathos, no doubt swaying the thoughts of many Iraqis against their brutal dictator and earning the United States a reputation for intelligence. Think about it, one day you're strapped to a mattress spring with a car battery hooked up to your testicles being shocked for mispronouncing "Tikrit". The next day you're listening to the radio and on comes this "awesome" rap song about Saddam with lines like "My days are finished and I will die - all I need is chili fries" and "Everybody in the house say we hate you".

That's about when you say goodbye to your family, strap some dynamite to your chest, and sprint to the nearest Marine Corps checkpoint. What a fucking travesty. There is so much wrong with this whole concept, let alone the cringe inducing execution, that it's hard to know where to start a rant about it. The whole thing reeks of the clumsy hipster appeal of something like "Poochy" from the "The Simpsons" only ten times worse because instead of a stodgy corporate think-tank it was done by the government. Asking them to create anything that's in touch with the youth market is sort of like going to a retirement home and asking a bunch of septuagenarians with Alzheimer's disease to pen a film script about teens coming of age in the ghetto.

Since the US government has been nosing around pasting the stamp of freedom onto the oppressed and/or evil people of Syria I have decided that it's my civic duty as a nerdy white guy to offer up any assistance I can. Seeing as how I once considered entering a rap battle when I was really drunk I think this qualifies me to prepare humorous political rap songs for the coming conflict with Syria. I would now recommend that the CIA begin taking notes at this point but they're already downloading every file on this site and feeding them through some sinister fuzzy-logic software to search for sedition. To ensure that the software flags this piece for their attention I will now type out the following words; bomb, kill, president, sleeper cell, anthrax, Ak-47, pumpernickel, Allah, and platelets.

The first rap I have put together is a little piece about Syria's current president Bashar Al-Asad entitled "Bashar? More like crook-shar, am I right?" It's to the music and beat of Shaggy's hit single "Wasn't Me". 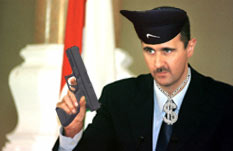 You DO NOT fuck wiht Al-Asad.Chorus

That's a nice relaxing and easy going song that I feel gets the message across much better than a clumsy tune like the CIA's rap. However, many male Syrians consider Shaggy to be music for girls, preferring "harder shit" like DMX and old Ice Cube. Similarly Iran has an almost religious hatred for Shaggy but they absolutely love Westside Connection. To this end I have put together a song to the music of "The Gangsta, the Killa, and the Dope Deala" by Westside Connection. This piece is entitled "The Dictata, the Crooka, and the Ayatollah." 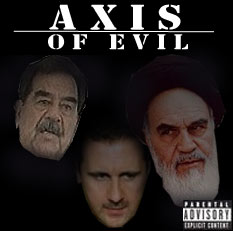 Hey,
Living on the axis of evil--ya'll trying to study me
Being jerks' a never die--it's too much love
The coalition and mankind's love of freedom be killin' niggas like us, you know what I mean
God damn--how many more motherfuckin' enemy combatant holding facilities ya'll gonna build
How many graves you gonna try to put us in
You know what I'm saying

Axis of evil is a rogue state, murda(x4)

Any one of ya'll niggas fuck with all of these niggas
These triggas we's killas[hahaha]
Tuckin' our tails in between legs
Wit a bitch like France braiding my head
Leave 'em til they matted forearm tatted
What's the Axis bitch you looking at it
It's gotta stop
I applied electric torture to more dicks than it
Takes to get to the center [once, two, three]of a can of soda pop
And it's gonna take a miracle
To drive a car safely 'cross the borda to Syria
Yeah, I lost a lot of wars but I ain't tryin' to see Norman Schwarzkopf
[Punk ass nigga] So let's wait till the air strikes ease off
So many foes walk in my capital
It's like the international, house of pancakes
All my statues gone, every bitch passed
A first not last, when we all hit the ass
My tanks is burnin' scrap piles weighin' a ton[what]
One Pussy, and UN resolution 1441
Dictata's don't dance we boogie[ahhh]
Niggas run out and get ya chili dog
[Mid Eaaaaast]

Axis of evil is a rogue state, murda (x4)

Well, it's the nigga that's housin' the scene
I got pounds of weapon's grade plutonium and all my bling be made outta zirconium
I put down dissent and freedom with brutality and violence
When I speak at a rally all you be hearin' is silence
Now what can I say every line of the Koran I lay be pure and
bombay like Peruvian yae
So I brag and I boast and all the honeys dig me
I create more fatwas than Salman motherfuckin' Rushdie
My homie Al-Jazeera plug me with the civilian casualty
But Coalition comin' like Kid Thunder and performin' a fatality
Now what's next I'm stuck like a Kotex
blindin' niggas with the buggas in my Rolex
With my bases gettin' bombed on a regular basis
I'll be fleein' to Libya with three cash-filled cases
cause ain't nothin' reala' than niggas gettin' they scrilla
like a dictata, a crooka
But Khomeini I'll be the Ayatollah

Axis of evil is a rogue state, murda (x4)
The Dictata, the Crooka, and the Ayatollah[murda](x8)

Damn it's a trip, all these Tomahawks comin' down
I cant go here, I can't go there
I feel trapped in a series of subterranean bunkers
And I'm probably buried beneath rubble

I admit mine aren't much better than the CIA's rap song, which is perfect for their purposes! Best of luck to them and their magical flying radio station in our future conflicts with the barbarian hordes of the Mid East.

Hello, Something Awful readers. This is karate-chopping Japanese sex symbol, Kenshiro, with some copied/pasted awesomeness from Jed's Hydlide review. All I can really tell you about this game is that it definitely doesn't feature me slowly stripping to Nelly's latest single, but since it's in the Rom Pit, you just know it's going to be some pathetic hunk of 8-bit cat crap that no one has played in 15 years.

Hydlide is the metaphorical pebble dropped into a vast pool of water that gives us a brief glimpse of how large and crappy the universe really is. The first thing you'll notice upon starting is that you're some kind of bloated midget getting attacked by ninjas and gay eskimos with fucked-up names like "ROPER" and "LADYAM". Don't let that fool you, though, because the rest of the game really sucks.

If you're a bad enough dude to rescue Fairyland, you can read the rest of the review by clicking here and also here.