Living with The Cryptkeeper 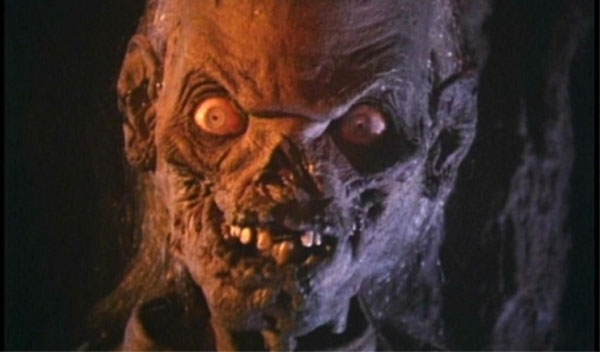 When you end up living with an honest-to-God Cryptkeeper, people start to question your life decisions. But it's not like I really had any other choice; rent was due, Caleb moved out weeks ago, and the government was offering me a fat two-hundred dollars a month to house someone who they assumed had an advanced case of leprosy. So I gave old CK (as I would soon come to know him) the guest bedroom, under the assumption he would keep to himself and abide by my strict chore wheel policies. During our first meeting, he laughed, talked about his grandchildren in St. Paul, and made a few offhanded remarks about finally starting that novel about his sexual awakening in college. Sure, CK's decaying body and rancid flesh would take some getting used to, but unlike Caleb, he actually promised to rinse out his cereal bowls, and did so without second warnings.

Cryptkeeper mania soon swept my apartment. My friends would stop over, curious about my new celebrity guest, and they rarely strayed from the recliner where he would spend nearly six hours a day watching DVR'ed episodes of Pawn Stars. And from the questions on their minds, you'd think Bordello of Blood was the highest-grossing movie of 1996. "Was Dennis Miller really a huge dick?" "Did you ever see Dennis Miller acting like a huge dick to anyone specifically?" "Did anyone spit in Dennis Miller's face or food?" He would chuckle softly to himself, wink at his admirers, and say "That's for the DVD commentary to answer, isn't it?" before retiring to the kitchen for his three-o-clock feast of Bagel Bites. His retired life was a simple one, full of contemplation, frequent naps, and occasional flashbacks to his service in The Korean War. Outside of the panicked screaming brought on by the latter, I tolerated his quirkiness and quickly invested that first two-hundred dollars into a variety of designer soaps for my bathroom. Sandalwood didn't cover up the stench of putrefaction, but it certainly helped.

As the saying goes, "Old habits die hard." Well, I propose a new saying: "Nearly dead roommates can be annoying as shit." One day, I came home and saw a note pinned to the fridge which read "Your GHOUL-friend Barbara called." I took offense to this, since Barbara's resemblance to a ghoul was only the result of an unfortunate birth defect, so I confronted old CK while he folded some bath towels. He claimed to be fighting his pun dependency with medication, which I found highly doubtful after he immediately wanted to know if he could "AXE" me a question. He sighed deeply, talked about his dear, departed wife, and asked me if I could avoid mentioning my "romantic enstranglements" around him for the time being. I agreed, handed him the box of Fruit Roll-Ups he requested from Albertson's, and left him to his folding and catching up with The Riches via Netflix Instant Streaming.

My friends' enchantment with The Cryptkeeper would not last long. When news came in that a close acquaintance had died in Afghanistan, he couldn't help but react with "Now that's what I call HACK-tive service!" My friend Paul had done two tours out there and nearly strangled him to death, until CK yelped "You're strangling me... TO DEATH!" which confused Paul so much that he dropped CK's corpse-like figure while desperately trying to figure out if what he said was a pun or not. It wasn't, and this laziness seemed to fuel Paul's rage even further. CK promised to make it up to him with a feast of "Finger food, ghoul-slaw, and eyes cream," and we all agreed this would be a great way to bridge these rocky waters until he started with that mad cackle again. Paul took to drinking, and it was then I decided that no amount of scented soaps shaped like swans could possibly make up for the social faux pas committed by The Cryptkeeper on a nearly constant basis.

We parted, and amicably. He claimed that his throne of skulls was from "a different life," and to this day it still sits in my living room. While I helped him pack, he spoke volumes about his travels in Europe, but when he drew out the "Germ" in "Germany" just a bit too long, I fully understood he was a sick man in need of help. So, in the tradition of a country that respects the rights of the mentally ill, I quickly sent him out to the streets, where he now sells bags of "GORE-nges" underneath an overpass of the 405. If you run into him, tell him I said that I'll "HELL him later." I'm not sure what it means, but it'll probably make him happy.