A Bunch of Ravers took over My McDonald's 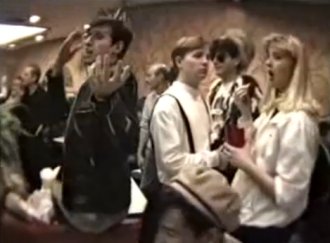 One night in 1989 I showed up to my job at the McDonald's in Times Square, New York, and the place was filled with gay ravers. They were dressed as gay versions of McDonald's mascots, like Mac Tonight in Liberace garb and Mayor McCheese with a rainbow sash. Some were grinding to the soft rock on the lobby speakers while others were snorting cocaine through McDonald's gift certificates.

My manager Lana was taking orders. She explained that the ravers had donated $1,000 to the Ronald McDonald charity to throw a party in our restaurant. "I hope you drink coffee," she said, "because we're going to be here all night. And also if you drink coffee I hope you brought your own coffee machine, because I might've destroyed ours in a fit of rage."

I'd made plans that night to watch an Alf marathon on TBS, so there was no way I was staying late. I tried to think of an excuse to leave.

"Then why were you listening to Boy George the other night?" Lana said.

"Boy George isn't gay. He's just so confident in his masculinity that he willingly flouts it."

"If you leave you're fired," Lana said.

As I took the ravers' orders, which they shouted over the Gloria Estefan songs on their boomboxes, I could hear them making jokes about me and Lana's heterosexuality. One said the reason I was so slow on register was because I was distracted by his French fries, which were erect-nipple symbols. Another suggested that Lana's dropping his chicken breast sandwich was due to her inexperience at handling breasts. 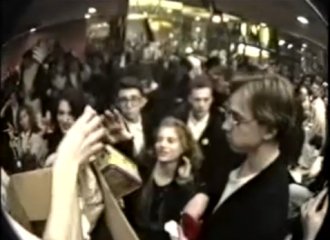 "This is horrible," I said to Lana. "It's just like Die Hard, except it's our restaurant instead of a skyscraper that's been taken over by homosexuals."

"Those were Europeans," Lana said.

"Only if another employee is harassing them."

"Well, you're letting them harass me. That's harassment by proxy."

Lana made the face she made when she wanted me to stop talking and told me to go collect trays.

As I walked through the lobby I saw some guys at a table doing coke. I remembered how one of my coworkers had been sent home for doing coke after he attacked a customer he thought was the Hamburglar. Maybe if I did some coke I'd get sent home too.

I walked up to the table and was about to ask for some coke when a guy performing a simulated rimjob on a sundae cup held the cup out to me, like he wanted me to lick it next. 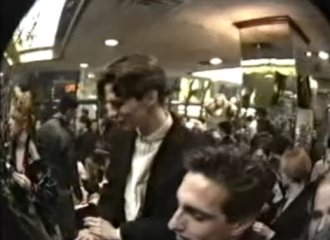 "Yeah," I said. I tried to think of something that would gain his trust. "Well part time, in between disk jockeying at dance clubs and selling meth crystals."

Everyone at the table looked at me. "Are you a narc?" someone asked.

"Oh my God, he is a narc," someone else said, pointing at my drive-thru headset. "He's wearing a wire."

"There's only one way to prove you're one of us," one of the ravers said. He put a tape that said "Prince - Camille" in his boombox and told me to dance.

The only dance moves I knew were the ones teenagers did in the Friday the 13th movies just before getting killed. I started performing them and the ravers seemed impressed. But then, in an instance of life imitating Friday the 13th, I turned around and saw something horrible. It was Lana, who put me in a full nelson and dragged me back to the counter.

At 11:00, after the ravers had left, I decided to sneak out of the store - there was no way I was missing the Alf marathon; if I got fired, so be it. But when I tried to open the door it was locked.

"I thought you might try to leave," Lana said, "so I locked all the doors."

She held up the key and I noticed it had white powder on it and her hand was shaking.

"Have you been doing coke?" I asked.

"I might've spent some of the charity donation on drugs."

Suddenly the key slipped out of Lana's hand and landed on the floor between us. We looked at the key, then at each other. "Don't even think about it," Lana said.

We both ran for the key. I moved faster at first due to my long, svelte legs, but then I slipped on a flier for an upcoming rave at Danceteria and fell and hit my head. 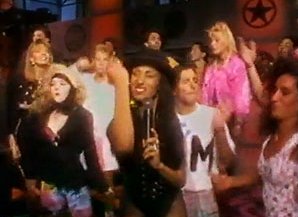 The next thing I remember I was in a nightclub, surrounded by guys who looked like extras from the Wham! "Wake Me Up Before You Go-Go" video. They started dancing to "Rhythm of the Night" by DeBarge. I realized I was in hell or a nightmarish coma and started screaming.

"Shut up," Lana said. She was standing over me, and I saw I was actually in a hospital bed and the dancers were on Club MTV, which was playing on the ceiling-mounted television. Lana said I'd had a concussion, and that she'd been waiting for me to wake up so that she could tell me I'd been fired.

After Lana left I asked the guy in the next bed, who had the TV remote, if we could watch Alf, but the guy - a raver recovering from an amyl nitrate overdose - insisted that we keep watching the dance show.