I used Photoshop to modify this piece of clip art so that it appears topical. I am now officially a graphics designer!Well, April Fools is now somewhat over, and thank the Ghost of God for that. I'm all for the occasional prank, but when everybody is doing their darnedest to pull a fast one at the same time, it gets to be too much. Practically every drunken webmaster takes advantage of this amazing opportunity to zing the mighty hell out of their readers by offering up giddy little lies. And oh boy, is it ever a thrill to behold! The part of April 1st I didn't spend hiding in my Iraqi and SARS proof panic room was spent surfing from site to site going "oh, you got me" while covering my eyes and nodding my head in shame for the human race. You might say my bah-humbuggery is related to me being a sore April Fool, but I assure you that is not the case. My general distrust of everybody, especially the Zionist Occupied Government, renders me unable to believe anything that doesn't come directly from underground conservative radio stations. Even this site played host to an April Fools spectacle. If not for the fact it would get me fired, I'd tell Rich "Lowtax" Kyanka how much I despise him. I guess I'll let that fiery hate burn in shadow, and without him ever knowing.

In the midst of my April 1st odyssey of surfing, I chanced across an article that reminded me of something that's all too real: Internet shorthand. I wish I could say this problem was part of an ongoing April Fools gag that somehow found a way to exist outside of its host month, but it's not. No, it's perhaps the greatest threat facing humanity today, if you don't count war, disease, demonic gargoyles, hydroplaning and all that other harmful stuff.

Carl Sharp knew there was a problem when he spotted his 15-year-old son's summer job application: "i want 2 b a counselor because i love 2 work with kids."

I've been a citizen of the Internet for about seven years now, and this sort of thing is nothing new. That doesn't mean it's any less mind-boggling. Things were a little different when I first started on the Internet. Back then people went to a lot of extra trouble to look and sound stupid. Instead of taking advantage of the letters conveniently placed on the keyboard, people would invest extra time typing in ASCII codes so they could write with awesome and l33t symbols. Back then communicating was so hard it was extremely common to have to print out chat logs and then have them translated by an expert of obscure cuneiforms or a professional linguist. Sometimes a simple conversation would take weeks to play out as a result. While there are people who still do that, the majority seems to have shifted to a new form of writing. Now dumb kids seek to communicate the exciting and meaningless developments of their lives with as few key presses as humanly possible.

This depresses me, because I can type fast enough that it's absolutely unnecessary for me to shorten three letter words or use acronyms to express such profoundness as "away from keyboard" or "be back later." A friend of mine who owns a stolen radar gun once clocked my typing speed at roughly 120 words per minute. While many of those words were either misspelled or obscene, I still think that's an impressive rate, especially considering I have the hand-eye coordination of an ecstasy-fueled sloth that's been run over by a tractor. I couldn't win at a game of wallyball even if my competition consisted entirely of mannequins clad in movement restricting plate mail armor. Even with my wallyball handicap I can still play "Battlefield 1942", masturbate, burn bootlegs of the new Radiohead album to sell on the Internet, and type a good 60 words per minute all at once. Given that most kids are now more immersed in technology than I ever was, I would think learning to hit keys in a speedy manner would come pretty natural. So then why are morons still typing things like "wot r u doin?" It's pitiful. Look at Stephen Hawking, the man is so paralyzed the only way he can communicate with anyone is by having violent neck spasms on a keyboard. In spite of this, even he probably types properly. I honestly don't know because he won't AIM me back.

Heck, I even go so far as to spell new SA employee Ryan "OMGWTFBBQ" Adam's username properly when I instant message him.

Of course I'm joking. Like I would actually talk to any of my coworkers. 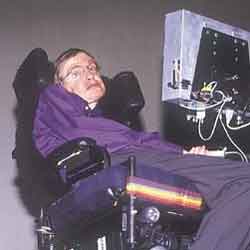 sup doods ne1 wanna play sum starcraft? i got broodwar runnin on my wheelchair comp.This wonderful shorthand isn't limited to cutting long and arduous words like "you" and "are" down to more manageable sizes. Even expressing emotions is now done through prefabricated acronyms and emoticons. And boy howdy, do they make things easy. I loathe "LOL" and "ROFL" with all my heart. The excessive usage of such simpleton displays is kind of scary, because it leads me to believe that there are people who are just sitting in front of the computer cackling like a goddamn hyena on laughing gas. The truth is far less comical to imagine. Most people just type it out of habit whenever they think somebody might have said something witty or amusing. Not sure? Be safe and LOL for them anyway. You don't want to hurt anybody's feelings. I know for a fact that most people are not actually laughing out loud when they type LOL and it eats me up inside like an AIDS infected cancer. I'm pretty sure that it could be argued that bearing false LOL is a sin, and nobody likes a sinner in this day and age!

The idea that this nonsense is seeping off the Internet to schools and other places of a professional nature alarms me in a way most alarming. Some argue that it has a place on the Internet, but I disagree. It takes an incredibly miniscule fraction of a second to write a word, even a long word, so there is no need to be a verbal short bus. I think the problem is only going to get worse as instant messaging becomes more popular. It's a sort of virus, and viruses are best treated before they become an epidemic. All these people who arrive on the Internet in an amorphous blob of stupidity see the way everybody talks and instantly start talking in the same manner. It's trendy. A simple solution would be to start murdering people who use Internet shorthand. It's never trendy to get murdered. Of course nobody is ever going to back up murdering people, so other, more drastic measures need to be enacted. It's just too bad there is nothing more drastic than murder, except for maybe a double or triple murder. I should really stop talking about murder and other acts of wholesale violence now, or my upcoming court ordered visit with a psychiatrist is going to be super duper awkward.

This whole update is even more ironic when you take into consideration the fact that I, an illiterate Internet writer, am promoting proper writing technique. Sure, I've probably physically violated thousands with sentences that run on like a crazy uncle at a family reunion when somebody mentions the federal government, but even I can get behind a good cause. Let's cut this shit out, okay? Thnx. Lol, ill c u xool doodz later, im gonna go 2 play counter-strike wit OMG.