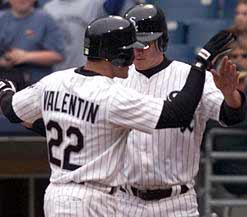 Watching these guys walk around a big green field will never get old! Baseball 4 Eva!For the last several years, I have been waging a casual war with the images displayed on my TV screen. The TV attacks me with things I don't want to watch, and I fight back by screaming "rape" and spraying mace in its glowing face. This has prevented the TV from savaging me physically, but not emotionally. Each and every stinking week, sports programming dominates the airwaves. It's an irritating and repetitious interruption that goes on ten times longer than it should. Now I'm no Hitler McGee, but I think it should be a federal crime to broadcast any sporting event to a private residence. They build giant fucking arenas, stadiums, and racetracks for sports to be viewed in, so it's not like rabid (and I do mean that literally) enthusiasts would be without a fix. It just means that they would have to fork out a little more money and lose a hell of a lot of convenience. I think it's a worthy tradeoff. I get sweet, sweet uninterrupted reruns of "Matlock" and they get to experience the glorious wonder of sports in person. Granted, I don't watch "Matlock," but I like to know that should I desire to, I have the option available.

I wouldn't have such a problem with sports if they made an effort not to make it an all day affair. When a game takes more than two hours to play, something is definitely wrong. If I had my way, all sporting events would be sudden death from the get go. I feel this will help speed up and make each game especially exciting. Can you imagine how cool sudden death NASCAR would be? Car crashes are the only part of NASCAR even worth watching. If I wanted to watch cars drive in circles all day, I'd buy a model train set and then glue Hot Wheels to the tops of my trains. Sadly, the average sporting event takes somewhere between three to eight stinking hours! I have never sustained a single thought for more than three minutes, so sitting through hours upon hours of guys running back and fourth, throwing and catching balls, or driving cars isn't a very thrilling thought for me. In fact, I'd rank watching an entire sporting event up there with giving a lap dance to a chainsaw. In other words, something I'm not particularly interested in doing. To make matters worse, they pad each sporting event with a pre-game and post-game report, which adds an additional six to twelve hours. It's bad enough you have to watch a bunch of sweaty guys run back and fourth for hours on end, but then you have to hear a bunch of masochists go over each and every single detail with expert analysis. These damn sports commentators could tell you more about the condition of any one single athlete's groin than they could about their own family.

Average Sports Commentator Guy: "What's amazing about Joe Smith is that he's recovering from a monster groin injury. He's been rehabbing it for several weeks now and it looks like he stands to make a full recovery. I spoke with Joe's doctors and they were all optimistic. They said they don't see groin muscles like his very often, so they know he will do just fine. There is of course a tragic history of groin injuries in the Smith family, as the senior Joe Smith injured his groin some 38 times during his days as a professional athlete. It didn't hold him back and he was still able to have one son. I had a son, but I'm not allowed to see him because I'm a worthless waste of a man who spends his days talking about injured groins on national TV."

Sure, you can argue that the reason I hate sports is because I'm deathly afraid to compete in them. You would be absolutely right on the money, too. I'm deathly afraid to compete in them. I lack the swiftness of a Shaquille O'Neal, who can slam-dunk a basketball with the greatest of ease. I certainly don't have the grace of a Shang Tsung, who can steal a soul just as easily as he can achieve a flawless victory. At best, my only athletic merit is that I can run fairly fast. Running is hardly a sport and anyone who says otherwise is secretly running from the truth. So really, sports offer me nothing but headaches and television viewing trauma. I will admit that I'm giving serious thought to becoming a professional hammock racer, though.

Another reason I hate sports is because each athlete is paid roughly a billion dollars to do their job. What is their job? Well, they have to run, throw, catch, and swing a bat or tackle. Unless of course they drive racecars, in which case they just have to sit in a seat all day. If we took half of what they paid professional athletes, we could wipe out world hunger, build at least one atomic deathray capable of destroying another planet, and still have enough money left over to get everyone a new car stereo. I see hundreds of homeless people each week, and almost all of them are capable of running and throwing. The rest could easily be motivated with promises of enough money to buy a whole shitload of booze and heroin. Why don't we pay them instead? Now don't get me wrong, I hate homeless people just as much as the next guy. I'm first in line to hurl rocks and insults at anybody who looks even remotely poor. I'm just saying that the money these athletes are paid isn't going to good use.

The final justification in my hate comes from the very athletes themselves. Most of these people are nefarious and undeserving of the lifestyle they have been blessed with. I think it's time we take a closer look at some of these sporting icons with a little help from our old friend, Mr. Bulleted List:

This man spends more on drugs than you will ever spend in your entire life.

Darryl Strawberry
Darryl Strawberry gained quite a reputation from his frequent and chronic drug abuse problems. He's been arrested more times than a mutant eight-eyed pope has eyes. Yet because of his fame, he has had chance after chance, all of which were squandered when he chose to shove more drugs into his mouth. Or maybe it was his veins. I really wouldn't know. I'm no drug addict, although I once ate a really strong Altoid mint that left me unconscious and dazed. My breath wasn't very fresh when I woke up six days later in Morocco. That was the last mint I ever ate.

Mike Tyson
When it comes to boxing, Mike Tyson's name is infamously synonymous. Known for throwing lots of punches (I think that's the goal of boxing, but I have no idea anymore), Mike Tyson is a force to be reckoned with. This creates major trouble, though. He's really famous, so naturally kids look up to him. Unfortunately, due to Mike's primitive grasp on the English language, he represents a horrible role model for children, who will grow up to forsake the written and spoken word. Mike also rapes women and tries to eat people, but that's pretty common these days.

John Rocker
John Rocker is most famous for being a loud-mouthed racist, which is a fairly amazing accomplishment in some respects, but generally not a good one. Thankfully, one of the many Major League Baseball franchises saw fit to make him rich. I have nothing against racism, so long as it's directed at androids or android minorities, but I'd prefer that those who practice racism not be richer than me. I'm pretty sure that civilization had some kind of meeting or at one point posted a memo that declared all loud-mouthed racists had to be poor and live in small shacks built on dirt farms. Then again, John Rocker may be the poster boy for the next generation of loud-mouthed racists. If that's the case, we should all celebrate him as a modern age hero by killing him while he is still young.

It might be okay if these guys were the only real trouble, but sadly pretty much every modern athlete is a criminal or unsavory character. Still, there are thousands of them, and they each make more money in a second than you and all your future offspring will ever make from now until the Earth files for bankruptcy protection in 2794. Can you really blame me for not wanting to watch a bunch of rich people run around for huge wads of cash? I hardly think so. I also don't think I'm alone in my crazy opinion. If you hate the constant assault of sports programming, follow my lead and whine like a little girl. If all goes well, there will be too many of us little girls for the jocks to beat up.

Cliff Yablonski Continues to Disapprove of You!

Mean old Cliff Yablonski has updated his page once more, adding an additional five pages worth of people he seems to grossly detest. If you enjoy looking at the living equivalent to the corpses depicted in those "Faces of Death" movies, then by all means, suffer! 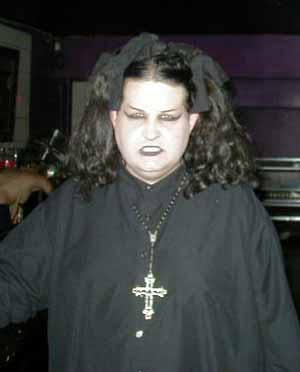 Stop on by and witness one man's crusade against the horrors of humanity.