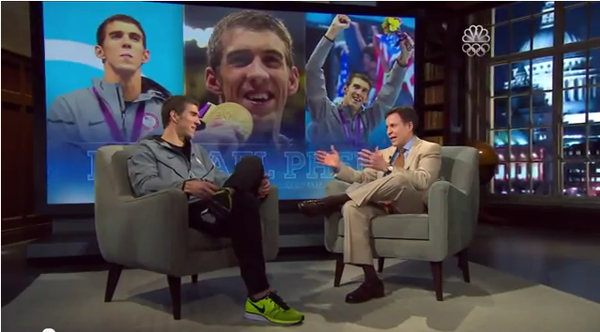 And now, a special in-depth supplement to Ian Golding's complete Olympic Coverage. US swimmer Michael Phelps finished his final Olympic games in grand style, racking up another embarrassment of medals to become the most decorated athlete in Olympic history. Shortly after swimming his final race, Phelps sat down for an interview with NBC's Bob Costas, who put Phelps's feet to the fire in the inimitable Costas style. Here's the full transcript of their historic conversation.

Bob Costas: Until now, your entire life's purpose was jumping into a pool and flailing to the other side as quickly as possible. Now, without the possibility of taking home the gold, the essential reward structure of that idiotic task has been dismantled forever. Your brain will never produce those endorphins again. How do you cope with the inevitable depression of a life without meaning?

Me too. Just consider this: you've made countless millions on endorsement deals, but medals and world records were the only currencies that held any real value. Now, your hope of ever earning either them again is becoming more and more remote. Is suicide a strong possibility for Michael Phelps?

Well, you never know what the future holds. I'd really like to travel the world, but after that, it's all up in the air.

You've squandered your entire youth in training, Michael. Years and years of sculpting your body into a sophisticated aquatic machine. Twelve thousand calories a day just to keep your muscles from buckling under the strain. Now that it's all over for you, will you waste away to a grey, bony wisp while pining for your days of glory? Or will your prodigious eating continue, turning your legendary frame into the burger-bloated corpus of a champion gone to seed?

It'll be great to take a break, but that's not what I'm focusing on right now. That's a nice thought, though. But right now, still enjoying the ride out here in London.

Even if you don't waste to nothing or get enormously fat, the inevitable fact of competitive life-- and of life in general-- is that your body will slowly wither and fail. It's been pummeled by years of overexertion and athletic abuse; do you think your ability to swim through the pain threshold will help you endure the constant, crippling pain to which you've condemned yourself in your later years, or will you turn to the dizzy comfort of heavy narcotics? 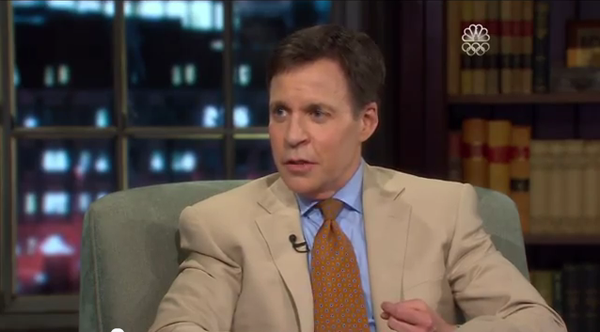 So far so good. Really excited to find out.

Speaking of which, your career has not been without scandal. You were arrested for drunk driving, and briefly suspended from swimming after being photographed smoking marijuana; even at the peak of your career, when you were totally focused on victory, you had a self-destructive impulse driving you to fuck it all up. Now that you don't have the Olympics to anchor you in some kind of reality, it seems inevitable that you'll fuck up on a grand-- maybe even an unprecedented scale.

Everything happens for a reason, you know? Those were isolated incidents, and I've definitely learned my lesson. I think I can turn these into teachable moments and maybe help someone else not make the same mistakes.

You've said you wanted to surpass the achievements of the past and become, in your words, "the first Michael Phelps." But like the crumbling stone legs of the great king Ozymandias, time will make a mockery of your achievements and your words of hubris will become more and more ironic as they echo through the ages. I sense that you know that your greatest triumphs are fleeting, at best.

And at worst, they're meaningless. You've reached the zenith of human physical prowess, and you've squandered it swimming across a pool, shaving milliseconds off a record that no sane society would value. But instead of being ridiculed for wasting your life on trifles, you're being lauded as a hero. Do you think that our society is, at its core, insane?

It could be, but I couldn't be prouder of my teammates and of America. We really pulled it off out there.

Your excellence at splashing around in a pool is truly unsurpassed. Do you think you can splash your way to a cure for cancer? Have you ever invented something in the pool for the betterment of mankind? Surely you're around water a tremendous amount-- any thoughts on solving the water crisis that will plunge our world into war in the coming decades, costing millions of lives? Or are you just focused on getting from one side of the pool to the other side of the pool and maybe, depending on the race, back again some number of times?

Yeah, I've got some really good things going on with the Michael Phelps foundation. Very much looking forward to helping out the kids, you know, however we can.

One final thing: would you call yourself more of an obsolete human machine, or a pool toy that has lost the ability to amuse? 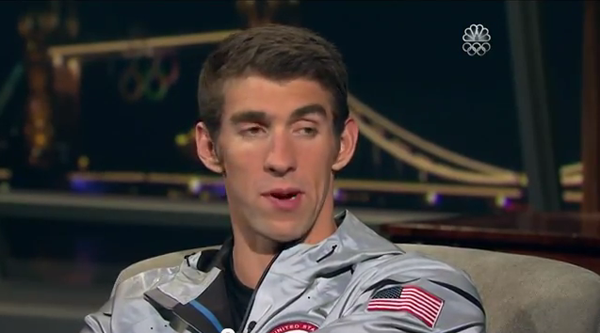 First and foremost, I will always be a swimmer. I feel like I've met my goals, I can go out on a high note.

Michael Phelps, thank you very much. I wish you the very best of luck surviving in a society that has no further use for you.

Thanks so much, Bob.