Guess Who Just Landed a Robot Car on Frigging Mars?

The NASA Young Astronauts Outreach Program is intended to involve students in the science of space exploration and interest them in ongoing spaceflight missions. Immediately following the successful landing of the Curiosity rover on the surface of Mars, NASA asked former ISS Mission Commander, Lt. Col. AJ Tucker, to address students participating in the program about the value of unmanned exploration. His ranting, jingoistic essay was shelved in favor of a more scientific debriefing by Dr. Cal Hulby that will be released August 9th.

Hey there kids, been following the Olympics?

Pretty amazing, watching all those teenagers launch themselves around like sled tests at JPL. Throwing those little hardbodies around doing flips and whatnot like my ex, Tracii, at a bachelor party. Of course we all want the USA to win the gold, it's about pride, and I have an update on those standings.

You will notice the USA somehow trails in gold medals, but we lead in launching cars, as represented by the 1989 Ford Escort hatchback, into frigging outer space. We may not bother to blast people into space anymore, but nobody can shoot cars into space like America.

If you could put have down the jelly beans and Segas for two seconds and picked up a Scientific American you might have read about the Curiosity Mars Rover. I admit, normally I don't usually give a flying f-word about unmanned missions to anywhere. My motto has always been "It's better to send a person, not some stupid robot with a half-working arm and no good one-liners," but credit where credit is due to the nerds working on this one.

Curiosity is bad to the bones. It weighs over a ton, it has bone-crushing tires, it has a laser it can shoot at crap, it has an arm that can pick up something heavier than a marshmallow. This is a man's rover, not some little Lego kit. Even the way it landed was boss. It flew down and then right before hitting the ground it dropped down on ropes and the top part did this helicopter maneuver and set it down nice and easy. 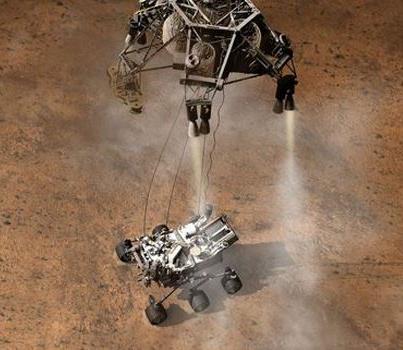 Pretty cool, right? I'm sure the nerds are going to find a way to goof it up. They probably forgot to put in a good camera that takes color pictures or didn't give it a skull face with red eyes in case it runs into aliens. I bet it is crammed full of stupid science experiments like frog eggs and plants that grow sideways and rubberbands so we can find out how rubberbands work on Mars. That's just the sort of thing the eggheads put everywhere in our space stuff. 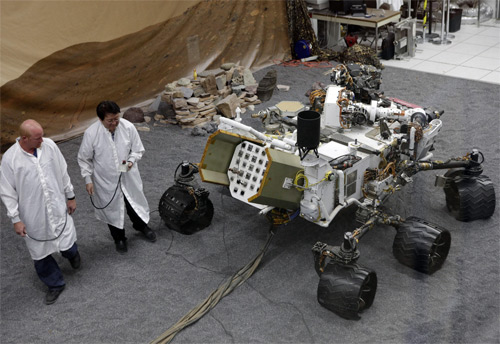 Trust me, if those pencil-pushers could launch astronaut-shaped frog egg experiments into space to do other experiments they would do it. They love those things. 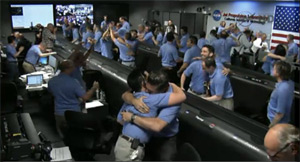 I was in mission control when this thing landed and it was wild. The last time I saw that many screaming, happy nerds in one place a truck full of Spider Man overturned on the highway. They were hugging each other and shaking hands and cheering and I'm like, ladies, calm down. It's not like you just landed Neil Armstrong up there. It's a nice car, but it's still just a car.

Then I might have had a few too many bottles of Beefeater out of the minibar and punched Cal Hulby because he made some crack about a human not being able to handle the stress of a Mars mission and I was like "handle the stress of these knuckles." Which he did not.

Why Mars, anyway? Haven't we shot enough junk at Mars? How many more times are you nerds going to pretend to discover water on Mars? I think I've seen NASA give five different press conferences about discovering proof of water on Mars. At some point you just need to take a bottle of water up there and dump it out on the sand so you can get over that barrier psychologically.

Basically, my point on this one is, no amount of chips and wires will ever beat the mark 1 eyeball and the spirit of courage of a human astronaut. Send me to Jupiter or something. I can't stand hanging around Mission Control doing these s-wordy f-wording Young Astronauts things. Send me to Pluto, f-word it. I don't have anything going on here since Tracii left me for Arnel Pineda, that guy who took over as the lead singer of Journey.

Just do it, NASA. I can't stay here anymore. Send me up in a GPS satellite. Anything. I have to go back.