If you're old enough to remember the first virtual reality craze but also young enough to still hold out hope that anything in life will ever live up to your imagination, this is a very strange time. The Oculus Rift is likely just a few months away. Now Sony has announced a VR headset of their own for the PS4, the even more audaciously named Project Morpheus.

Here's what virtual reality was like the first time around.

You stepped onto a circular platform surrounded by a waist-high rail that prevented you from walking off into traffic or an open furnace. A thirty pound helmet was affixed to your head with straps made entirely of nerd sweat and dandruff. This abomination was either tight enough to cut off circulation to your brain or so loose that it wobbled when you looked around. In front of each eye was a screen with an even lower resolution than an Xbox One game. You played as a blocky man standing on a checkerboard in space, ineffectually waving an NES zapper around as a five-polygon pterodactyl picked you up and dropped you into the void. 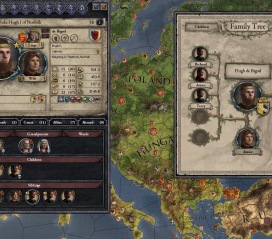 After you have navigated a family tree and researched different systems of succession laws in virtual reality, Crusader Kings 2 will never be the same.It was amazing. No, really. The whole uncomfortable and clunky ordeal was worth it for the simple act of turning your head and having the artificial world around you rotate. That sense of being there was remarkably potent, even when "there" was a hellhole of nonsense.

Now technology has reached a point where virtual reality can be done better, lighter, and far cheaper. I'm personally excited about hooking a headset up to PC, given the variety of games and the platform's mod-friendly nature. You just know that someone is going to hack a first person view into Street Fighter IV and make everyone barf.

The Oculus Rift won't take over PC gaming, but there's no reason why it can't be the modern equivalent of flight sticks at their peak popularity. If there's VR support in a few weird sims, indie games, and something like the next Fallout, it will gain enough traction and developer support to do just fine.

Sony's virtual reality hardware faces a tougher challenge. Expectations are very different when it comes to console peripherals. Anything less than an immediate success with support for several big titles will likely fail to draw enough developers to the device, which would in turn condemn it to the fate of the Power Glove/Move/Kinect. No one wants to go through that again. That road is paved with shovelware, broken dreams, and haunted clearance bins. Sony seems to be going all-in on virtual reality, though, and I hope they succeed.

If they don't already have VR headsets in the works, other console makers are probably thinking about it after Sony's Morpheus announcement. Microsoft might have even pulled a few people off of Office and the Xbox One app monetization accelerator add-on to work on virtual reality, while Nintendo seriously considers putting their giggle sensor project on hold. What would the technology look like in the hands of these companies? You just know that Nintendo would get extra weird with it. Their headset's name would probably be something like:

Your head IS the controller! Shake your head violently to make Mario do a spin jump! Nod in time with the prompts to advance the mandatory tuturial prompts! Fumble around until you find the external touch screen. Now the real fun begins.

Buy it today so you'll be ready to experience a virtual reality Metroid game three years from now, followed by a VR Zelda in the fourth quarter of 2019.

Is this a peripheral for the Wii or the Wii U, or an entirely new console?

Miscrosoft will probably skip the cheesy codenames altogether and go with something a little more safe and corporate like:

A hundred dollars more expensive than the competition. Just powerful enough to function, with half its resources dedicated to empowering your experience with convenient microtransactions.

Did you know that resolution doesn't matter at all, and that it matters even less when the screen is super close to your eyes? Each screen in Microsoft's virtual reality headset has nearly 100 pixels and runs at 3 frames per second. Our research shows that anything faster is too disorienting.

Even if Nintendo and Microsoft pass up on virtual reality, it will be strange to see Sony taking a huge risk all alone after starting this console cycle with such a commanding lead. I look forward to seeing how it all plays out, and eagerly await my next encounter with a checkerboard pterodactyl. It's a great time to be alive and interested in trivial shit.