Imagine if the ultimate power gamer in AD&D history met up with the silliest immortal level ideas of Gygaxian excess and decided to create a Monster Manual specifically for ultra-high-level games. The result would be The Immortals Handbook - Epic Bestiary: Volume One, released under the D20 OGL. There is no editor or "reasonable" person saying, "No, that's too much," to author Craig Cochrane. From a monster hierarchy chart that lists the number of Christian Gods (1) to a golem made from a neutron star that can explode planets with a punch attack, nothing is too ridiculous. Which makes the Bestiary's oddly serious tone all the more delightful. 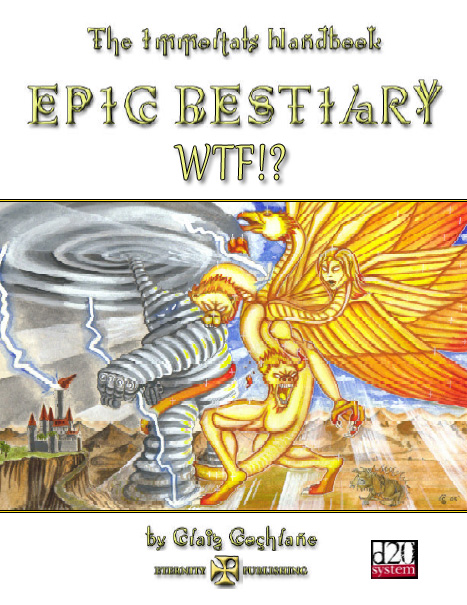 Steve: I am not gonna lie on this one, dude. I am pumped. Epic D&D games don't get enough credit, but there is nothing like a full on god hunter campaign or something.

Zack: I understand the appeal of high-level gaming. Everybody wants to be Goku and Darth Vader. I get the appeal of it, but not the reality. I remember a 6th grade campaign into hell to kill Orcus and it was just preposterous. We were not even playing the game right and it was still tedious. I can't imagine how boring correct combat rounds would be at, say, 40th level.

Steve: At a certain point combat does sort of go from "swing a mace" to "use eight different abilities and spells in one turn and attack four times" but a good DM can manage that stuff.

Zack: Fair enough. You're pumped. I'm doubtful. Let's see who is right when this whole thing shakes out.

Steve: Look at that cover, dude! A tornado man ten times bigger than a castle is punching some sort of flame hydra lady.

Zack: The unused storyboards for the battle of Jerusalem in Kingdom of Heaven are wild.