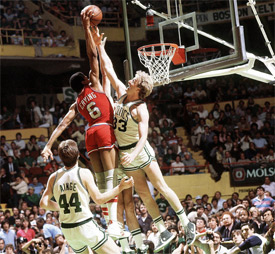 The Chinese appreciate basketball almost as much as Americans. They have an extensive basketball league and their colleges take the game seriously. Some would even say that the Chinese take basketball more seriously than we do in America. We invented the sport and they perfected it. Maybe that's because in China there is no word for "slam dunk." All efforts are team efforts.

I don't watch basketball, collegiate or otherwise, but I did play basketball for a year in high school, so I have developed an understanding of the fundamentals. These days I play squash, which has given me a good appreciation of athletic culture. And it stinks. Watching a Goldman-Sachs banker sitting naked and texting someone in the locker room does not give me much hope for this current generation of athletes.

I recall a time when men wore neckties when they played basketball. What is happening these days is more like the animals from opposing zoos being set loose on each other on a basketball court. There are many American words for slam dunk and I promise you, by the end of watching a single collegiate basketball game, they will all have been used several times.

Showboating? Been there. Done that. I took trick shots at the hoop. I "sunk a floater" into the "old rascal patch" in my day. I sure thought I was cool at the time, but I was really the opposite of cool. I was drool, as an MTV person might say.

Americans used to be special. We used to understand the particular ideals that set us apart from the rest of the world. Why don't men wear hats at the store? Those times were sexist and racist, admittedly, and it is good that we are no longer sexist and racist in this country, but the men in those days got things done. They aimed high and they achieved.

Men with big ideas rolled up their sleeves and stared out windows at rainy cities they helped to build. They smoked at their desk, because there was not time for a smoke break, and they touched their secretaries however they pleased. Which is not to say that it was a good thing that the secretaries were not allowed to be Jewish or non-white, only that it is a fact that they weren't Jewish or non-white and at around that same time America went to the moon. 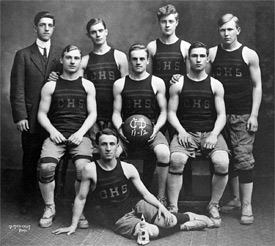 A team effort is all well and good if you have a team of bounce ball experts. When it comes to the international stage, sometimes the world needs a dunkman. It can't always be team fundamentals. Vladimir Putin understands this. When you go to that hoop you need to be willing to go vertical and foul whoever it takes to get that big air.

There is a reason you cannot go to the United Nations and ask for a slam dunk.

When it comes to international diplomacy, playing safe and hanging out by the free throw line to make some technical "bucket shots" is not going to win the game. You have to be aggressive and masculine. Like men used to be in the 1950s and like men, apparently, still are in Russia.

My prediction for so-called March Madness is as follows:

Yale will defeat Harvard for the championship title and maybe, if we learn to understand the limitations of freedom in a working society, and Barack Obama can put aside his petty animosity and learn to work with Republicans, we might be able to teach Vladimir Putin a thing or two about hoopgame.