I Only Attended That Nazi Rally for Research Purposes 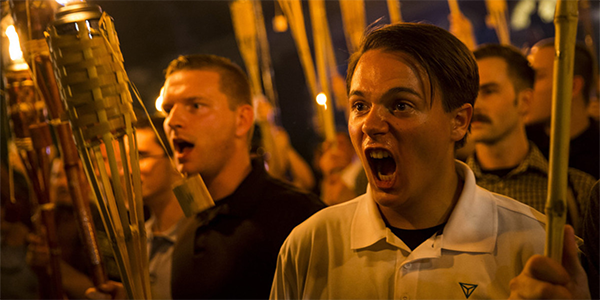 If Crayola had a color called "shocked," that's exactly the crayon you could have rubbed all over my face when I received your e-mail telling me to clean out my desk. Mr. Jenkins, it looks like I was mistaken to think you were an open-minded man who supported his employees trying out different political ideologies in this free and just country called America. Yes, when I joined this company, I did sign a paper saying I could be fired at any time for absolutely no reason, but I assumed that was just a business-related formality. Just like the sexual harassment seminar where I mostly played Clash of Clans and looked up the hot girls I went to high school with on Facebook--all fat now. But it seems that the trust I put in this institution has been betrayed.

Mr. Jenkins, you don't have to tell me how those Nazi rallies looked on TV. Frankly they were ugly. Those journalists purposely used low angles to make us look more menacing, and they honestly owe you much more of an apology than I do. You know what I saw when I was there? A bunch of clean-cut young men in polo shirts and cargo shorts, sporting the stylish Macklemore haircut and carrying tiki torches for the purpose of keeping mosquitoes at bay. Was I surprised when someone filmed me marching in their ranks? Of course not. Was I surprised when thousands of people online identified me, highlighted several completely unrelated posts I made on Reddit's diaper community, and decided to tell you about my actions? No, just disappointed. After all, this wouldn't be the first time this company punished me for thoughtcrimes. (For the sake of civility, I will not mention the time I put Barack Obama toilet paper in every bathroom stall, or how it cost me eight dollars a roll.)

To be honest, it's extremely insulting to be labeled a "Nazi." Was I marching with several Nazis? Yes. Was I waving a Nazi flag as I marched? Yes, but only out of kindness: I was holding it for another man so he could wave a larger Nazi flag. Clearly, no good deed goes unpunished. But where most people saw Nazis, I saw a bunch of proud, young men marching for what they believe in. Maybe I don't agree with their methods, but I can definitely get behind their ideas. Should there be more white people in this country? Why, I don't see anything wrong with that. In fact, all of my friends happen to be white, and who could say "no" to having more friends? I don't have a copy of the Constitution in front of me, but I'm almost positive being anti-friend is distinctly anti-American. Ask yourself if that's who you want to be.

Even if I'm far too intelligent and unique to apply any political labels to myself, I still have to support the actions of those young men. Agree with them or not, they filled out the proper permits to be extremely racist in public, and that should be commended. Again, I would never call myself a Nazi outright, but during my time at that march--which I attended purely for research purposes--I received several free pamphlets that opened my eyes to problems our mass media is too cowardly to cover. In fact, I learned all about Globalists, and planned to bring this up during our all-hands meeting on Monday. Did you know they could be infiltrating our company as we speak? You don't deserve it, but I'll give you a tip before I have security escort me out, as you requested: check into Jacob Goldstein in accounting.

You may think I made a huge mistake, but it's actually you who made the mistake. Keep toiling away in that rat race, Mr. Jenkins. Meanwhile, I'll be appearing on the YouTube shows of like-minded folks who were also shamed out of their respective industries. And I'll make sure to let everyone know about how you and your cronies unjustly punished me for exercising my freedom of speech. Mark my words: the good name of Circus Elephant Waste Removal, Inc. will be tarnished forever.