I decided to go out and purchase "Megaman Battle Network" for the Gameboy Advance, in preparation for the inevitable "standing around like a shithead while waiting to board a plane" fun that one experiences when attempting to catch a plane at the Seattle airport. In case you've never been to the Seattle airport before, let me share a big secret that the aviation authorities are afraid to reveal: there is only one functioning airport gate in the entire facility. The airport simply rotates around at unpredictable intervals so the plane will line up with the random functioning gate. Note that I wrote the word "plane," which is singular. This is because there's only been one plane to ever successfully enter or leave the Seattle airport, and all it currently does now is spend two hours driving up and down the runway, racing the baggage mobile and playing chicken with the food service bus. This is the closest that the airline food service industry has ever gotten to real "chicken," so I suppose we should all be thankful for this. 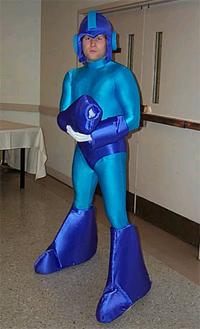 Leave it up to cosplayers to ruin any fond memories any of us have of anything.

While I was sitting on the plane and attempting to count the various vehicles that were queued in front of my plane for takeoff (I'm fairly sure the line stretched to Portland), I began playing Megaman Battle Network. To my shocking surprise, I actually found it to be a really fun and original game. Now don't get me wrong; I'm a huge Megaman fan. If Megaman were to walk into my livingroom right now, I probably wouldn't try to murder him. I would say, "hey Megaman!" and he'd say "hi Rich 'Lowtax' Kyanka" and then we'd go out to get a beer and he'd get all pissy when I would keep pouring alcohol into his lasergun arm-hole. We'd probably get into a drunken brawl and I would wake up in a drainage ditch at the bottom of a hill wearing nothing but a Burger King crown and women's jewelry. Megaman beats me because he loves me and cares for me and my black eye is from the time I fell down the stairs and then my face hit his fist six consecutive times. I have been able to maintain this Megaman fandomness for such a long time for one simple reason: I refuse to play any Megaman game after number four. Anybody out there that has the Megaman Playstation series will undoubtedly know what I'm talking about... I'm sure as hell not going to force myself to loathe the Megaman franchise by subjecting myself to the feces rollercoaster that Capcom began riding after the third sequel. Not that the Reploid saga isn't just the most enchanting work of literary art to hit the Playstation since Revolution X.

The Megaman series started with Megaman 1, the number "one" signifying the fact that it was in fact the first game in the series, as opposed to Megaman 4, which was the fourth game. I remember playing this game over at my friend Dustin's house while we listened to Metallica and threw burning rags into underground wasp nests. He lived out in the middle of Shitsburg, Missouri, a town which had more fenceposts than residents. I'm not really sure why there were so many goddamn fences all over the place... I think that a secret redneck fence cult snuck into town in the middle of one night and began building fences in a drunken construction orgy. I mean, it'd be one thing if the fences were used to contain cows or horses or corn or redneck farm children or whatever, but these fences seemed to be built for the sole purpose of dividing different varieties of mud. Maybe the town had a huge "raw filth" export that needed to be split up or something, I don't know.

Like many good Nintendo games, there was a distinct lack of fences in Megaman. The original game, along with the 50 games which followed it, revolved around a good robot named "Megaman" who ran around destroying bad robots who were not named "Megaman." This was because 99.999% of all robots in the Nintendo universe are evil. If you're opening up a robot production facility and you have even the most remote association with Nintendo, you can be pretty much sure that your robots are going to be running awry and blowing up major metropolitan areas within a matter of minutes. I bet the Nintendo insurance salesmen refuse to visit the Nintendo robot factories. They're too busy insuring the "defenseless princess and large-eyed animal demographic" from being kidnapped and stored in the top of a castle which is populated with floating blocks that have giant eyeballs painted on them.

Although Male Cheerleader Man was one of the most creative Megaman bosses, he never really caught on.

In the original game of Megaman, your mission was to destroy the renegade robots who have taken over your town of Monstropolis and created tiny linear theme parks devoted to their kinky superpowers. Oddly enough, the following 800 sequels also followed the same central theme, with the only noticeable difference revolving around the exponentially stupid powers of the robots or the fact that instead of being humanoid shaped objects, they were now animal-shaped objects or alien-shaped objects or kitchen appliance-shaped objects. I don't really blame this on Capcom; the main storyline behind Megaman forced the writers to really scrape the bottom of the barrel when thinking of evil robot themes in later sequels. Look at this simple comparison between games:

Star Trek Collector Plate Man turned out to be one of the worst enemies.

The enemies in Megaman 1 pretty much revolved around basic forces of nature: electricity, ice, fire, and boomeranging barber shears of death. Although Bomb Man was included because black circles were easy to draw on the Nintendo, I am still not sure what the hell the motivation behind "Guts Man" was. I can just imagine the conversation between the developers and Capcom...

CAPCOM BUSINESS GUY: "Okay, I see Bomb Man here throws bombs, Elec Man shoots electricity, and Fire Man shoots fire. Now what's the deal with... Guts Man?"
MEGAMAN DEVELOPER: "Well see, his superpower is being big and fat! Once you kill him, you absorb his power to do something vaguely related to moving large packing crates!"
CAPCOM BUSINESS GUY: "Alright, I understand that. He's got super strength. But why did you name him 'Guts Man'? Where are the guts?"
MEGAMAN DEVELOPER: "Who cares, we've spent three minutes total translating all our instruction manuals to English. What are the Americans going to do? Stop playing our game and instead buy Section Z?!? Ha ha ha ha ha!"
ENTIRE ROOM: "Section Z, ha ha ha ha!"

I'm fairly sure that the inclusion of Guts Man was the result of some overlooked contract clause that the Capcom lawyers missed, like in those movies where the person sells their soul to Satan in exchange for incredible sexual powers, but they forget to read the fine print of the contract that reveals their power only works on crippled animals in Shriner petting zoos. Then Satan begins laughing maniacally and a dramatic orchestra score swells while the camera zooms into the darkened background, revealing a character sketch of Guts Man that Satan made the previous night. I think I actually saw this on an episode of "The Outer Limits," although I could be wrong because that show doesn't have a big enough budget to afford both sketch paper and a plastic devil mask.

Regardless, Megaman Battle Network recaptures the uniqueness, fun, and originality that began trailing off after Megaman 3. Instead of the tried-and-true sidescrolling platform game that defined Megaman, this Gameboy Advance title takes the characters and launches itself in a new direction, combining action with RPG-like combat. If you can somehow ignore the comically embarrassing use of inappropriate Internet lingo inherent to the title, you will probably enjoy this game. It's one of the first GBA titles that have given me an actual reason to fight with the portable console's horrendously shitty screen and underpowered sound system. Oh yeah, and you get to blow up Guts Man too. 'Nuff said.