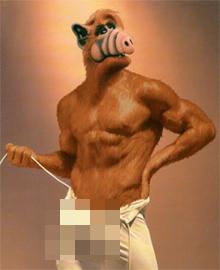 It's no big secret that I'm too retarded to figure out how to make large amounts of money. In fact, just about every venture I've been even remotely affiliated with has fallen to pieces; Gamefan, eFront, Express.com, the Detroit Lions, that one Israeli church where the married people danced through the floor, and Jon-Benet Ramsey all suffered from my patented "Touch of Death." Do you remember the Lost City of Atlantis? Of course you don't; that's why it's "lost" as opposed to the "Not Lost City of Atlantis." Ancient historians (NOTE: the historians themselves are not actually ancient) have discovered conclusive proof linking the fall of Atlantis to early banner ad sponsorships with this website. If you're reading this paragraph right now, and I'm fairly sure that you are, house odds are pretty good that you'll wake up missing a vital appendage tomorrow morning. This is all because when God was distributing luck points to members of the general public, he decided to withdraw all those points and instead boost my constitution stat. I also received a +5 resistance bonus against Geocities sites and AzN PrYdE.

However, this is all going to change soon. I have the most ingenious idea to reap in ill-gotten gains faster than Gamespy swindled Michael Ovitz out of $5 million for Radiospy. As you are (probably) well aware of, the human populace was recently shown the wonders and marvels of "Ginger," the scooter which isn't a scooter and was previously called "It" but now it isn't called "It" anymore due to the fact that it's called "Ginger" because that's it's name. The fantasy world that the media invented up was apparently clamoring for Ginger ever since Steve Jobs claimed people would "erect entire cities around 'IT'" and Amazon.com CEO Jeff Bezos said, "I'm so excited about 'IT' that I can almost forget the time our stock sold for $500 a share, unlike today when you can purchase a couple million shares for the price of a Krispy Kreme donut." Bezos never explained why anybody in their right mind would want to purchase a Krispy Kreme donut since they all look like sweaty bloated ticks and have the equivalent nutritional value of digesting the bumper from a Chevy Impala. Fortunately, today's article is not about eating bumpers or stock prices, it's about me making money. And there's no way I'll make money by doing whatever the hell I'm currently doing. Judging by this CNN article on IT / Ginger / Fake Scooter, this is where the cash money is:

The ABC television program "Good Morning America" demonstrated the invention Monday, a two-wheeled, self-propelled scooter that can travel at about 12 mph.

Kamen said the two-wheeled scooterlike vehicle is "like a pair of magic sneakers" because the passenger moves by thinking forward or backward -- as if walking -- without falling.

Okay, so correct me if I'm wrong here, but this so-called "revolutionary" piece of mechanical engineering history is simply a psychic scooter? Did somebody somewhere start wanting and demanding this kind of invention while I was asleep or out of town? I can think of about a hundred things that I would prefer to be invented before a psychic scooter, many of which shoot out flames and spin. In an age when people are spending ridiculous amounts of money for the largest and most inefficient consumer SUV tankers they can find, why would people suddenly decide that they actually desire a goofy little two-wheeled piece of mind reading metal? You can't hook up 50,000-watt speakers to a psychic scooter and play whatever fucking awful rap music is currently in style. You can't use a psychic scooter to get drunk and commit vehicular homicide. You can't make out with your girlfriend in the back of a psychic scooter because it has no back and you both would fall off into the street where other psychic scooters would bump into you repeatedly while making little bleeping sounds like the spaceships from "The Jetsons." Despite all these shortcomings, the fantasy world that the media invented up is apparently going apeshit over Ginger the Psychic Scooter, which is easy to believe because the fantasy world that the media invented up previously went apeshit over Limp Bizkit and fly fishing. I have studied and documented the hype behind Ginger the Psychic Scooter to such a degree that I actually read an article about it and briefly thought about it last night before I fell asleep. As a result, I believe the world is now sufficiently prepared to learn about my latest invention, a creation which will change the entire world. Well it might just change large portions of the world. And I don't know what it will change these portions into. Maybe lava or some type of clay. That's of little concern to me though since my main concern here is mass marketing this thing even more than the amazing XCam2, only with significantly less emphasis on the "pedophile voyeur" demographic. Without further ado, I would like to introduce you to my beautiful new creation: That.

It's That! That's It! My mother often cries while talking to me on the phone!

As you can tell by the image on the left, "That" is very mysterious and highly interesting. It's so mysterious and interesting that every time our photographers tried to film it the cameras combusted and their faces began to melt like the Nazis from "Raiders of the Lost Ark." We had to darken out the image of "That" because it was the only way we could reproduce its image and also because it's in the FBI's Witness Protection Program. How mysterious! And interesting! Let me present some of the many, many features that "That" can offer you, the average slob who watches "Fraiser" and eats those potato chips that taste like plastic cutlery.

Travels at speeds up to 18 miles an hour, even more when nobody is riding it or it is thrown from the back of a pickup truck and off a mountain.

Is completely environmentally safe (according to environmental laws from the 1800's, back when people used to live in coal mines and relieve themselves in any nearby water supply).

Receives that new XM radio crap where you have to pay $1500 and all you get is 138 different classic rock stations rotating the same Eagles songs for infinity.

Travels at speeds up to 21 miles an hour, even more when the wheels are attached.

Will not read your mind like certain other inventions which I won't name, inventions that are psychic scooters which intercept your brainwaves and report any of your impure thoughts to the police or the church or the Police Church.

Comes with a large blue question mark and a orange spikey thing which will poke you if you try to use it.

Travels at speeds up to 36 miles an hour, even more if you purchase the "Type R" model which has a huge racing tailfin that also doubles as a ironing board.

If you mount a blender on it and somehow get a really long extension cord, you can use it as a blender. Blender sold separately and not supported by our warrantee.

You will become immortal after using it. Note that not a single president or astronaut has died from using "That." This statistic proves that "That" is the key to living forever, much like Alex Chiu or ginseng.

Travels at speeds up to 84 miles an hour, even more if you're racing a Buick full of Mexican high school kids.

Is guaranteed to never defy the laws of physics as long as you own it. You can sleep safely at night knowing that it will not suddenly become dark matter and turn your basement into some kind of twisted inferno from another dimension!

Travels at speeds up to 367 miles an hour, even more if you use the "turbo" button that simply causes it to jettison excess weight such as your luggage or yourself.

Special bolt-on mother-in-law simulates the experience of taking long journeys with your mother-in-law who has severe flatulence problems and only talks when her mouth is full of taco meat.

Travels at speeds up to Mach II, even more if you're able to shift into 568th gear without your skin flying off.

I'll be hitting up investors for large sums of money as soon as I've finished cleaning all the cat hair that is congealed to every object in my apartment. Expect to see me on "Good Morning America" once I figure out how to get around their security guards. I'll be the guy in the crowd behind the window holding a sign that reads, "HIYA MARTY, JANICE, AND EVERYBODY IN SASQUATEECHIE, WISCONSIN!!!" So that's that and it's "That"!

Another week, another new Fireman Comic!

Well that certainly was an educational experience! Or something!