I don't say it often, but when I do, I mean it - what the hell is wrong with this country? Now, it's true that I've spoken out against the war on this site, but that doesn't mean I'm not patriotic. I'm as patriotic as they come. I believe in the strength of America and that this is the greatest place to live on the face of the Earth. Now that I've cleared that up, I'll say it again - what the hell is wrong with this country? We have got some serious issues. Let me explain just how I came to that conclusion. 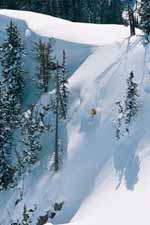 Mary's Nipple - not just a place, but a state of mind.

It's common knowledge that whenever the writers here at Something Awful are having trouble coming up with a topic for our next update, we turn to what's in the news. For example, yesterday's Cheeto article by Reid "Frolixo" Paskiewicz. He wrote an entire long, rambling article based off of a lameass news item about a giant Cheeto. Obviously, he didn't have anything else to write about. Well, I found myself in a similar predicament when I sat down to write my update. Lowtax stole my thunder earlier in the week with his insane article that only made sense to super-intelligent squirrels and Zack "Geist Editor" Parsons, who is a super-intelligent squirrel in his own right. I wanted to write an article that was totally incomprehensible, even to me, but since that gimmick was taken, I was at a loss for a topic. So, I did what we all do in our moment of desperation - I turned to the news. Perhaps it was fate, perhaps I just naturally zero in on the word "nipple." In either case, this article caught my eye.

PRESSURE from uncomfortable skiers and other tourists in Wyoming, USA, has prompted the Grand Targhee Ski and Summer Resort to change the name of one of its mountains.

Mary's Nipple is now just Mary's, and signs with the word "nipple" have been covered with tape. New signs were to arrive in about two weeks.

But the covered signs have rankled some local skiers, who feel a bit of their history has been lost.

The name dates back three decades to a story about a waitress named Mary, who was working at Targhee's Trap Bar and streaked through it and the resort one night.

Have we really gone so far astray as a society that we'd try to censor nature? I mean, I can understand changing the name of french fries to freedom fries. That makes perfect sense to me. After all, we love freedom and hate the French. And what better way to express our undying devotion to the cause of liberty and thumb our collective nose at one of the largest political powers in the Western world than by renaming a greasy fast food side dish? Same goes for the new and improved freedom toast now available at your local Denny's. We've definitely got our hearts in the right place with that one. There isn't a chance in hell that I'm going to start calling first base "freedom kissing," but that's more of a personal issue. There's something about being reminded of the bloodshed and atrocities of the war on terrorism that is just a turn off, no matter how far I shove my tongue down a girl's throat. The point is, I don't really mind some of the name changes we've got in the works. For instance, I think the change from Bin Laden, Delaware to Sweetwater was really the way to go. Hopefully Anthraxville, Kentucky will follow suit. However, changing the name of Mary's Nipple is not just wrong, it's downright hypocritical. 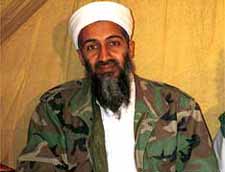 Is Bin Laden just upset because he doesn't have nipples? Only time will tell, but sources point to no.

What is the war on terrorism really about? Putting a stop to violent extremism with an emphasis on Middle Eastern nations, where the cultural climate has produced a generation that places more value on martyrdom than on human life? Not even close. This war is about protecting the American way of life. Terrorists hate our late-night parties, cheap beer, and attractive co-eds. These things are like kryptonite to terrorists. They don't want us to have them. And there is no body part more American than the nipple. Terrorists hate nipples. I don't even know if terrorists have nipples or not, but if they do, I guarantee you that they aren't happy about it. If we rename Mary's Nipple, what is left to fight for? We'll be doing the terrorists' job for them. We might as well cover our hot American babes in sheets and ban porno. And once we've gone that far, what's the point of living anymore?

What I want to know is, where did all this sudden prudishness come from? Yes, I realize that American culture is considered sheltered and puritan in the eyes of the European community. I know our society must seem pretty conservative to folks over in, say, Amsterdam, but we're still the ones who made miniskirts and bikinis socially acceptable, so keep smoking yourselves retarded, clog boys. When people talk about good old-fashioned American ingenuity, which I assume most people do on a regular basis, they're talking about our pioneering spirit, our rugged individualism, that urge to excel that inspired us to create faster cars, deadlier drugs, tighter clothes, and bigger bombs than anyone else. They're not talking about our ability to cover up our naughty parts so the tourists don't blush. Especially now, when our President wants to play cowboy and impose the American way of life on every part of the world, we need to unite and embrace that which makes our land so unique. We should be proudly standing behind our nation's nipples, not covering them up with tape. 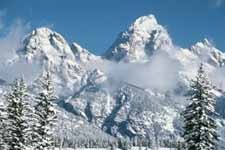 Naming geographic features after lewd body parts is an American tradition. I'm particularly amazed that the six residents of Wyoming are allowing this name change to occur, considering that their state has more mammary-themed mountains than any other state in the union. Besides Mary's Nipple, Wyoming is also home to the notable Grand Teton mountain range. For those of you who don't speak French and have no ability to derive meaning from context, "Grand Teton" is just a froggier way of saying "Big Breast." They were named as such when a band of intrepid French explorers first caught sight of the spectacular range, with its two huge peaks, and said, "Hey, those look like giant knockers." Well, except they probably said it with a snotty French accent, and quite possibly in French. Now, I understand if people are a little uncomfortable with having a mountain range with a French name now that french fries are being eliminated from the national vocabulary. So if the Grand Tetons need to have their name changed, that's fine. Take away the French, but for the love of all that is holy, don't take away the meaning. Let's call it what it really is - Freakin' Huge Boobs National Park. I can see it becoming a very popular vacation destination. Don't think the change will come without a political blowback, though. After all, the French did help us out during the Revolutionary War, so to cut them out of our culture altogether is just begging for the wrath of president Jacques Chirac. I'd expect France to initiate an all-out war, and in a fit a rage, promptly surrender. Casualties should be low.

The elimination of all quasi-sexual references from nature is an appalling trend. Where will our national parks be without our beloved Tetons, Condom Creek, or the Giant Anus geyser? What will ornithological societies do without the titmouse, the red-breasted booby, and the speckled colonpecker? Where will poor comedians be without humorous-sounding animals to provide hours of cheap, cheap laughs? Without smut and French in our culture, all America will have left will be diet soda - and not French or sexual-sounding diet soda, either. Truly, without Mary's wondrous Nipple, all is lost.