My Home in the Land Called Internet

Seeing as how Ricky "Lowtax" Ricardo has been spilling the beans about his disastrous life, I feel the compelling need to do the same. The problem with my life is that I don't have a life, not even a disastrous one. I may have at one time had a life, but I'm pretty sure I lost it in a bet or swapped it for some chewing gum. What's left for me is one thing, and that one thing is spilling the beans on my life as a pretend celebrity on the Internet. It may surprise you, but a little over a year ago I was no more than a casual follower of this website and its incomprehensibly strange forums. Then, for reasons largely attributed to drug addictions and scientific studies on the consequences of bad decision making, a young Zack Parsons hired me as a writer. I assume he had Lowtax's consensual approval but it's hard to tell considering how much of a drunken head case Zack is. Back then I was paid roughly three nickels and a unicycle ride for my efforts, now I'm paid royally. Each month I'm shipped half my weight in rare and poisonous Chinese spiders that I diligently train in hopes of opening the first theatre to feature an all arachnid cast. We're hoping to have "Miss Saigon" down by at least August. All and all, I can honestly say that it's been more than worth it. Ever since becoming a member of the Something Awful Family my world has broadened to include more awkward insanity and strangeness than a Michael Jackson sleepover. Okay, so maybe I'm lying there. Still, it's been pretty odd.

Perhaps I should elaborate on what I've come to learn and the wonders I've come to experience regularly. In fact, I'll do that. This is me doing that, dude.

Electronic Messaging in the 21st Century is a Joy
I've had fairly active e-mail accounts in the past, but none as bizarre as my somethingawful.com account. Aside from the 100 pieces of spam I average each day, I get a fairly good deal of random zaniness. The most rewarding (and horrifying) bonus to this job is all the weird images that get e-mailed to me. Because of my tenure as Photoshop Phriday's evil totalitarian dictator, people routinely send me some of the most frightening image attachments. I assume they want me to publish them, but these digital travesties are usually so incredibly bad all I can do is laugh out of utter despair. True, it's just a bunch of honest folks trying to share some laughs and make people smile. Too bad these people are often so far from funny and talented that they make the images featured on the Page of Shame somehow look good in comparison. Really good.

Normally I wouldn't want to encourage these people by giving them any publication, but hey, why not. My pain is your pain. What follows is a very small showing of the type of images I get sent each and every week. I really don't remember who made these, so if you're one of the lucky authors featured, feel free to feel a sense of tremendous pride. Your work is probably making people laugh, but not in the way you hoped. I will say up front that these aren't even the worst of what I get, I just have habit of not saving every piece of crap that comes my way.

Another fun aspect is all the strange e-mails I get from confused people. I usually get at least one a week, and I'm never sure why. Sometimes it's somebody thanking me for sharing my honest views on a topic nobody (including myself) on SA has ever written about, and other times it's people condemning me for expressing beliefs I never knew I had. In most cases, beliefs I've never even written about. My first week here I wrote an article on MapQuest, and somebody e-mailed me to tell me how narrow-minded my beliefs on Judaism were. I knew then that I was in for a fun ride. I kind of wish this ride would slow down, because guys, I'm going to puke all over.

Web Comic Authors are Masters of Revenge
Not long ago I made the grave mistake of taking shots at Andy Fresh, a nauseating foray into the world of bland and poorly illustrated web comics. As a result, Andy Fresh himself fired back with one of the most brutal attacks I've ever had the misfortune of absorbing. Without clinging to any clichés and giving no quarter, Andy thoroughly put me in my place and humiliated me to such a degree that I honestly feared showing my face on the Internet ever again. 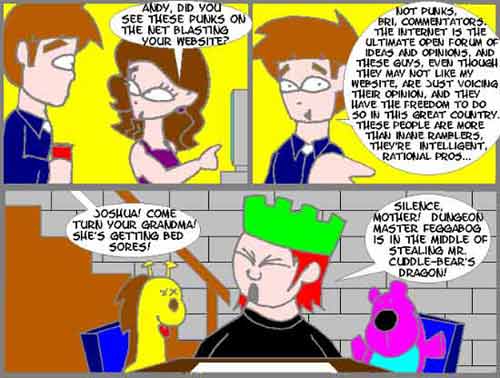 Most of you will never have the upstanding honor of being featured in a web comic, let alone have your entire world crushed by one. I tell you, there are nights when I cry myself to sleep and wake up screaming like a girl. I threw some pretty heavy insults at Andy, but he put them to shame. I could tell I outraged Andy, or at least upset him. I wasn't expecting him to do what he did, though. He channeled his outrage into action – action that became the chauffeur that drove the fists of his wits to their singular destination: my face. In all seriousness, being mocked in a terrible web comic was a real thrill that I will treasure for the rest of my wretched days. Or at least until I forget again ten minutes from now.

People Really Don't Like Spastic Animations
It's not hard to imagine a world in which people really don't like horrible spastic animations, because that's the world we live in. I won't say I agree, because I strongly believe spastic animations are our future. Yet the majority of my attempts to give a little liveliness to the world have been met with harsh criticism from people who complain "it hurts my eyes" and "it gives me a headache." I guess I forgot I was living in Pussyville, France, where people can't take a little abuse and like their animations softer and with more than two frames, both of which are more or less the same. You people disgust me.

Internet Rivalries are the Pits
Some of you may notice the constant bickering that goes on here between staffers. Zack and Rich have their immortal feud that always seems to dissolve into allegations of speedball abuse and boyhood obsessions with a certain hunky German leader who killed a few million people. Then there is the confusing battle between Ben and Reid that gets scarier as each week passes. I heard this week Reid commissioned a Flemish sculptor to create a statue of Ben being raped by a penguin with a razor cock strap-on. I don't know about you guys, but I'm tired of it. Specifically, I'm tired of not being in the thick of it. Who is Josh supposed to have a rivalry with? Nobody on the staff is left, except for those smelly ROM Pit, Cranky Steve, and State OG guys. It wasn't always this way, as I used to have Scotty "Kung Fucious" Delbango to mock. Of course that bastard had to go and get himself fired for writing that series of articles encouraging every white blooded American to do their part and join the KKK. I really enjoyed having him as my enemy, and the times we fought back and fourth were quite refreshing. I'm sure everybody else enjoyed seeing two random idiots on the Internet tossing pathetic jabs back and fourth as well! The way I see it, with both my eyes and my imagination, it doesn't have to end. From now on, whenever I feel the need to make fun of somebody on the staff, I'm going to make fun of him. I honestly don't care that he isn't on the staff or that he can't post a rebuttal. I'm sure he's probably too busy dying of AIDs or servicing lonely dockworkers throughout Turkey's many seaports to even care anyway. I'll belittle his profoundly ignorant ass all the same. And hey, Kevin "Fragmaster" Bowen, you aren't exactly the cat's meow either!

It certainly has been a strange journey writing on this crazy web of hyperlinks and stupidity. Along the way, through all the ups and downs, I've learned to cope with each bewildering twist and turn. I don't mind that my inbox is a putrid pit of disease or that I can barely sort any legitimate e-mail out from the fifty thousand valuable money saving opportunities I'm presented with each and every day. I also don't mind that a few cunning souls have found a way to somehow connect Photoshop to their digestive systems in such a way that when they need to defecate, they do so in JPEG form and then e-mail it to me. It sure beats having brain dead coworkers that nest in cubicles the same way zombies nest in mausoleums forward me and fifty other people hilarious joke e-mails that have been crawling around since the lonely days of Arpanet. I've learned to love this job, even though this job seriously hates me with all its heart.

Jedidiah "shortened version of my first name" Kirchner here with a review of another god damn ROM based on Fist of the North Star, this time for the Sega Genesis. The superior blast processing capabilities of my Genesis emulator, working in conjunction with Valve's Steam and various mathematical algorithms currently being patented by Shiny Entertainment, allows "Last Battle" to be one of the worst Sega games ever made.

I've never seen the original Fist of the North Star anime, but apparently the storyline was far too epic for a single NES cartridge, because I recently found out that Japan has several games dedicated to this incredible saga of airborne body parts and break-away clothing, including an arcade game that teaches players secret martial art of Jet-Kwon-Do by having them hit padded targets with their fists while animations of people exploding are periodically shown on the screen. All non-pussies reading this will be happy to know that I am not making any of this up. That Fist of the North Star arcade punching simulation? Yeah, it actually exists. If had a choice of going to an ice cream social with either the doctor who found a cure for cancer or the genius Konami programmer responsible for Punch Mania: Hokuto No Ken as my date, it'd be the Konami guy hands down, because while medical science may have saved the lives of literally several important celebrities, it is brilliant things like this game that make life worth living. Well, except in leper colonies. Those fags can build their own arcade machine.

In addition to all the absoludicrous humor you know and love, this review also contains pictures of an incredibly cool Japanese arcade game, along with descriptions of the game that are automatically more important than any piece of literature from the 20th century (except maybe graphic novels where the villian is fat and/or a midget).