A Very Special Vodka for a Discerning Consumer 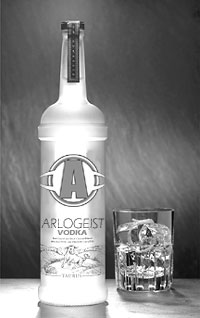 The best vodka alive.Arlogeist GmbH has been a family owned distiller of premium vodka for 11 generations, producing limited quantities of Arlogeist Vodka in the Dutch highlands of Greater Michigan. While technology has changed from the lazy days of horses, mules and goats to the fast paced information age of cars, jets and camels, Arlogeist's time-tested formula for distilling and bottling a superior vodka has remained the same. Our vodka is slow brewed in the same alembic copper potstill that it has been since 1795 and not because we couldn't afford to buy new equipment. The potstill is nicknamed "The Agonizing Scorcher" among our distillers, which is why we have the picture of a man shrieking etched into the bottom of our bottle.

From Field to Store: The Arlogeist Process

Our premium vodka is distilled from a mixture of wheat and oats, hand selected by a special Grainseer from the fields of Abasca, where it is said Frederick the Great spilled so much blood in battle that only the finest grains would grow in the crimson-drenched earth. The Grainseer massages each and every batch of grain for texture and relaxation. He listens to the grain to make sure it is not contrary and he examines samples beneath a scanning electron microscope in an effort to find "excellent grain" disguised as "the best grain". If one of our Abascan suppliers is found to have provided us with substandard grain the man will have a Vodka Jihad called upon him and his family. Our agents are everywhere and nowhere, and they will find the heretic and punish him for his indiscretion. To make the best omelet you have to tie a few eggs to a post and flay them in front of the villagers.

Once the Grainseer has returned to Greater Michigan, the grain is placed into a leisure area where it can listen to classical music, play games such as Scrabble or Jenga and age to ripe perfection. No Pop-o-matic Bubble games are permitted as they have a tendency to unnecessarily agitate the grains. This period is very crucial to our process and if the Grainseer senses that the grain might not be fully enjoying itself, the entire batch is immediately ground into a paste, used to coat cannonballs and fired into the Great Lakes. Assuming all goes well the grain is then funneled via a glass-lined duct system into "The Agonizing Scorcher". There the grain is combined with water excavated from boiling chambers located by our Vodka Seismologist deep within the earth's crust. The water is then filtered through the Shroud of Turin, reduced to single atoms and then reassembled as water by our Managing Atomsk and run through a platinum trough which is viewed by 101 men dying of dehydration.

"The Agonizing Scorcher" is brought to full heat using the remnants of furniture looted from Versailles during the French Revolution as fuel for the fire. Clerics from various faiths and long lost religious sects make pilgrimages to the potstill to burn offerings to their respective deity and appease the spirits trapped within the vodka. On the day before the Destillermeister takes a sample of the vodka within "The Agonizing Scorcher", the original cast of Andrew Lloyd Webber's "A Chorus Line" is brought to Michigan for a performance to maintain high morale within the potstill. Soon comes the moment of truth, as the Destillermeister reaches into the potstill with a diamond-cut quartz dipper clutched in his tong-hand. He smells the vodka to make sure it is not surly or unkempt, samples it hot with the tip of his tongue and a splash on his palate, and decides at that moment whether the vodka is saleable. If everything has gone according to plan the batch is rushed into the next phase of production. However, if something is even slightly amiss the entire batch is sealed in a steel drum and dropped by cargo helicopter into an active volcano. 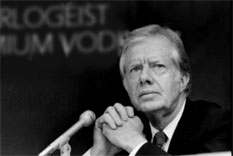 Jimmy Carter concentrates on our vodka, pictured here getting the call during a 1983 seminar on "The Best Vodka Alive".The next phase of production begins with a phone call to Jimmy Carter, who is instructed to "concentrate very hard on life-defining vodka". While the former president does this, the vodka is bottled while still warm into the UV-sterilized Arlogeist Vodka bottles, hand blown in New Orleans by the finest Jazz trumpeters, acid-etched with the formic extract of 500,000 Spartan Ants from the deep jungles of the Amazon. The bottles are blessed with incense and then inserted one-for-one into the fresh carcasses of baby seals for their long journey across the Oceans to discriminating consumers.

Even in the shipping process Arlogeist's attention to detail does not falter. A eunuch guard is placed around all of the vodka-laden baby seals within the cargo holds of the various fine freighters we have selected to transport our vodka. These men are trained in the black art of killing by nerve-point strikes, but their duty to the vodka is more likely to require an act of self-sacrifice than an act of violence. The eunuch warriors must carefully watch the vodka seals to ensure that they come in contact with no dust or other contaminants. If this occurs they must make the ultimate sacrifice; detonating the charges placed throughout the ship and scuttling it, smashing the bottles with Ki-strikes even as the ship slides beneath the waves. Arlogeist accepts no impurities in our vodka.

Returned to dry land, the vodka is removed from the baby seal carcasses and placed into refrigerated cases mounted on hand-drawn palanquins specifically constructed for consumer distribution. In weeks these palanquins will deliver Arlogeist Vodka into a fine liquor store near you, assuming no brigands set upon our prized shipment. 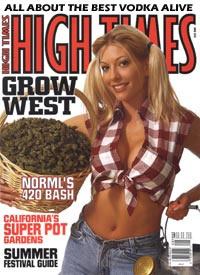 Needless to say the best vodka alive wasn't pictured on the cover of "High Times"."Arlogeist has produced a heavenly vodka for eleven generations and shows no signs of stopping. It is a nuanced and rich flavor that achieves its level of depth without overpowering the senses. It is the cut of a rapier in the hands of a master swordsman rather than the overwhelming hammer blows of most other vodkas. It tastes of jasmine, smoked teak and just a hint of aquamarine."
- Nolan Lister, "Wine & Spirits Magazine"

"Dude this shit fucking rules. It's kinda harsh and shit when you first try it straight up, know what I mean? Then you just like fucking pour that shit up in some Kool Aid and it is like 'mmmmmmmm yeah [bitches] it is also [a perfect vodka for a classy dinner]."
- Chance "Phats" Roller, "High Times Magazine"

"LOL! Dranking this si lake getting quadz and fragz0ring campers with the rale gun. Mixing it with Mountain Dew is l33t or go strrate to the shotz like the Desert eaglez hittin hard. Turned my modam game into a LAN party. I switched my spraytag in CT to there logo so fagots know to bowdown to the big 'A'. ROOFLE OWNED CAMPERS."
- I_Fr4663d_j00r_m0mzorz, "Planet Fragworld Dimension"