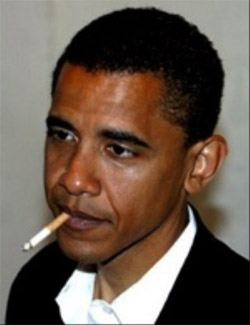 The American story is told in Obama's DNA and the Democrat's story is told in this photo. Tuesday was a big night in the strange and ugly world of American politics. After months of agonizing and pontificating the results of the North Carolina and Indiana Democratic primaries forced the media to realize that Hillary Clinton has an impossible path to her party's nomination. MSNBC newspaper-clipper Tim Russert bugged his eyes out, grinned devilishly, and proclaimed, "We now know who the Democratic nominee will be." You can check out the clip on Youtube if you ever wanted to see what a Claymation potato-man might look like when it talks.

In rational reality this whole thing was sewed up by Clinton's rival, Barack Obama, around the time of his 80th consecutive landslide victory in the primary. Russert and the rest live in a different world of their own creation, where numbers and objective facts are heard, processed, and then subjected to a de-factifying process. The end result is election coverage that resembles an Appalachian storyteller's yarn about Ol' Punkin Seed, told by the side of a dusty road to a group of kids in threadbare overalls.

"...'evah seence, any fool what gone and fished in Ol' Whiteladee Holler say he feel the cold hands o' Hillary Clinton grabbin' at his legs."

Whatever hellish nightmarescape inhabits Russert's roast beefy brain has finally collided with objective reality like a guy on bad acid seeing the hug worm turn into the Eighth Avenue Local train one second too late. Russert wrote the permission slip for the rest of America to finally stop pretending this bullshit is still going on, freeing us up to talk about a completely different set of bullshit: the General Election.

Now that this thing has moved on after only nine or ten years of primaries we can finally indulge in a little vice presidential speculation. Let's take a look at four possible VP contenders that have to be near the top of any short list for Barack Obama. 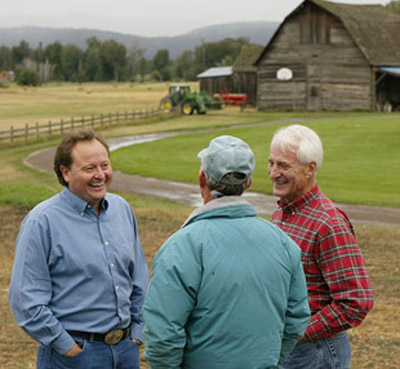 Montana Governor and genuine hayseed Brian Schweitzer is an example of one of the New Democrats springing up in unexpected places. Like Jim Webb (another VP potential), you take a dash of pandering to Republican issues, add a healthy portion of folksy common sense, and then inject the rocket fuel of George W. Bush's staggering fuckupedness. Even the sort of people who buy their pets at Wal-Mart vote for guys like Schweitzer.

Pros: This guy is so red state he could be selling pickup trucks on TV whenever he leaves politics. He's so white and inoffensively friendly his family looks like a postcard sent from a vacation to a Thomas Kinkade painting. Whatever he's doing in Montana is working. He has the highest approval rating of any governor in the country.

Cons: Those approval ratings are in Montana, a state that awards a whopping three electoral votes. You could find that many electoral votes in the cushions of a couch in Florida or Ohio. His "regular white people" appeal could help in the short term, but remember: Obama was raised by a single mom on food stamps, married a woman from a South Side Chicago working class family, just paid off his student loans and he is now considered the most elitist and out of touch of three candidates. Anyone's real image can be reinvented. 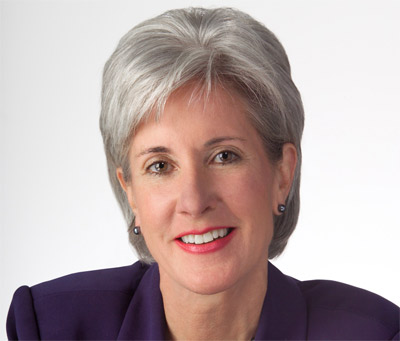 If Obama wants to try to scoop up some of Clinton's pesky white lady demographic without sharing the ticket with the woman responsible for his back full of knives he could hardly do better than Kansas Governor Kathleen Sebelius. Sebelius is a very rare and precious thing: a female democratic governor of a red state.

Pros: She's a rising star of the party and has the potential for a presidential bid of her own without the help of Obama. He would be doing everyone involved a favor by scooping her up onto the ticket before the political stage turns her into a pressure-cooked diamond of hatred like Clinton. For being 60 Sebelius is sort of a hottie and could someday spawn a popular GILF Hunter website. She also doesn't make that terrifying harlequin face whenever she sees a crowd applauding that makes Hillary's arrival on stage at a rally seem like a third act monster reveal.

Cons: Based on her soporific performance doing the Democratic rebuttal to Bush's final State of the Union she is unlikely to be faced with a lot of applauding crowds unless Obama is within ten feet. She may do well in debates and town halls, but she'd be lucky to fill a rally in a prison cafeteria.