The World Health Organization ranks hunger as the greatest threat to the world's public health. Just a bit further down the list are people who have food in front of them, but can't bring themselves to eat it for whatever reason. Selective Eating Disorder is a real thing, and it's nice that Fussy Eaters exists as a support system to let sufferers vent about the worst foods and congratulate each other on breakthroughs ("I Ate Carrots!"). But given that SED is seldom fatal, it's probably fair game to laugh at entries like "Apple! I did it!" and "Who Likes cereal with milk? I don't :(" 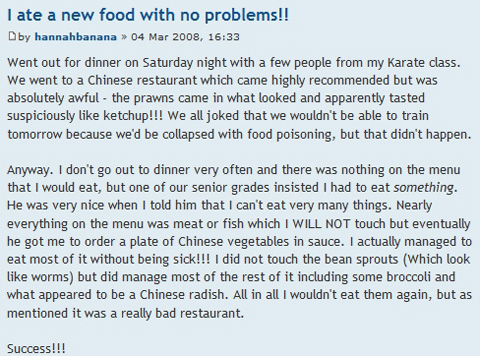