The Official ELEAWTA Newsletter for April, 2004

This beloved symbol always brings a tear to my eye. Coincidentally, every time I see this symbol, I pour a tablespoon of salt directly onto my eyeball. Scientists are looking into a correlation.

Hello once again to all of your members and would-be members of ELEAWTA, the planet's fastest-growing and sadly, most controversial, animal activism group. It's been several months since I last published one of our newsletters. Perhaps you thought the group was defunct. Perhaps you thought our neverending stream of litigation had finally beaten us down. Perhaps you thought we had abandoned our mission. Perhaps you thought I'd never be so low on ideas that I'd have to resurrect this tired premise. Well, I'm happy to tell you that you were wrong, Wrongy McWronglestein. We're still here and working harder than ever in our endless fight to find the planet's most dangerous and dwindling creatures and kill and eat them before they vanish for good. 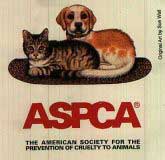 Moments later, that dog killed that cat. Where were you then, ASPCA? WHERE?

It's true that we've had more than our share of legal troubles. We just can't seem to get a fair shake. We've been bounding from trial to trial, defending ourselves from charges of "animal cruelty," "violation of the Endangered Species Act," "disruption of Government-Protected Habitats," and "public nudity," just to name a few. I'm starting to think it might be a lot easier for everyone if we could just get all of these ne'erdowells, lollygaggers, and malcontents to put together one class action suit, instead of all of these little petty suits. Luckily, ELEAWTA has managed to put together a massive legal department. Come to think of it, I'm just about the only person in the entire organization who isn't a part of the legal department! We're sort of like Scientologists in that regard. But as Chairman, I have other things to do. Still, I like to help out our legal team whenever I can by putting a stop to these frivolous lawsuits before they get off the ground. To that end, I'd like to address a letter which recently came across my desk, along with a subpoena, from the ASPCA.

Your organization is an outrage. The fact that you encourage people to destroy endangered species is a crime not only against the law, but also against nature. To make matters worse, you not only encourage the slaughter of some of the rarest and most precious creatures on Earth, but by asking your membership to devise supposedly "clever" ways of capturing and subduing these animals, you sponsor torture. You, sir, are a monster, and we will see you in court

The American Society for the Prevention of Cruelty to Animals

These are some fairly serious charges. Here at ELEAWTA, we do not take this sort of thing lightly. I'd like to take this opportunity to respond to these accusations right now.

You seek to protect animals from cruelty, and a nobler goal there could not be. That is why it saddens me to see that there is hypocrisy in your ranks and to see that it extends all the way to the top of your esteemed organization. You claim that you want to help animals, and in the same breath you denounce my organization. Don't you realize that ELEAWTA exists to serve the most important animal of all? Man! We are a humanitarian cause, dedicating to furthering the annals of mankind's knowledge. Since the homo sapiens first evolved, we have desired more and more knowledge of the world in which we live. You would not deny a dog the ability to scratch behind its ears or a cat the ability to flail ridiculously at a piece of string or a set of keys or basically anything you put in front of it. So how can you deny mankind the ability to further its knowledge? And in this case, the knowledge gained by our cause can help your own. We do not promote animal cruelty any more than you do. Rather, we understand that when encountering some of nature's most dangerous creatures, it is often necessary to defend oneself. The goal of ELEAWTA is not to harm the animals, but to prepare and eat them, so that if these animals do sadly become extinct, we may at least have some record of what they tasted like and what condiments accompanied them best. We do not aim to render any animal extinct, but we are realistic enough to realize that the fight against extinction is often a losing battle. While we hate to move a species even a little closer to their eventual doom, we feel that our contribution to the extinction of animals is minimal, and most of all, very difficult to prove in court. If you can't see the immense benefit to society of our efforts, then I feel sorry for you. 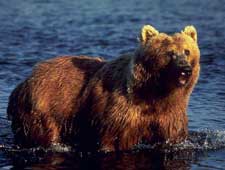 Moments later, that dog killed this bear. Where were you then, ASPCA? WHERE?

Alright! So that unpleasantness is out of the way! Now, onto the real focus of today's newsletter. It is my pleasure to bring you a stunning report from one of our ELEAWTA members, Jerry Paznozski. He's a first time contributor to our cause, but seeing his attention to detail and precision, I'm sure we'll be hearing more from him in the future. Here is his blow-by-blow report of his pursuit of the fearsomely delicious Alaskan Brown Bear.

Well, on second thought, maybe we won't be hearing from Jerry in the near future. Nevertheless, don't let that stop the rest of you from going out there and doing your duty as members of ELEAWTA! Remember, we need to eat these animals now, before it's too late!

The Weekend Web: Pig in the City

Hello internet friends, Zachary "Spokker Jones" Gutierrez here again with 12 more pages of some of the world's most horrible forums. This week learn what Toothing is and why you should be scared for your life. Discover what it's like to obsess over cartoons. Thrill as we take you on a journey through a forum full of people batshit insane over a video game. Just check out this wonderful image.

It's all here in this week's Weekend Web.