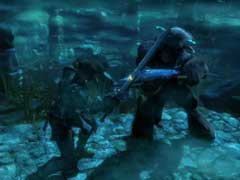 The game's main character fights an evil minotaur in the intro movie.

After years in production, Neverwinter Nights is here. Much controversy and anticipation has been circling the game for a long time, and as expected Atari missed the intended release date, instead waiting until June. Was the extra effort worth it or was it not enough? Apparently not, as the game is still lacking in several critical areas, areas which detract from the entire gameplaying experience.

Probably the main reason for excitement over Neverwinter Nights is that it’s the first game ever to use the 3rd edition “Advanced Dungeons and Dragons” rules. Atari worked closely with Wizards of the Coast, the creators of Advanced Dungeons and Dragons, to make the game accurate to the style of this long-forgotten role-playing system. It’s not surprising why Wizards abandoned AD&D long ago in favor of playable trading cards such as the incredibly popular "Magic: A Gathering." The system bulks down the game, its thoroughness making the action slow to a crawl. Combat can take up two three minutes which is simply outrageous considering I have 128 megs of RAM on my computer.

The opening intro was well done, showing your main character fighting a minotaur around some ruins (which kind of looked like the city of Atlantis). I was not impressed with the opening introduction like I was with Dungeon Siege. The menus are what you would expect - littered with third-rate fantasy art including the game’s villain (an evil mage) and a seductive woman wearing revealing armor. The character creation system was interesting until I realized there was no real point to specifying your character’s skills when you could just click “recommended” for the absolute best choices possible. Why should customization be possible if there’s no reason whatsoever for it? I once attempted to customize my character but gave up after spending hours distributing his points to strength, intelligence, wisdom, charisma, constitution, agility, and poison resistance. 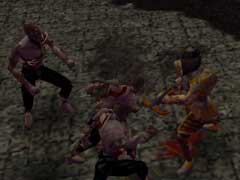 The combat is plodding and not as interesting as other Diablo-inspired games.

Upon finishing character creation, you are led through a training mission and into the game. The actual gameplay is quite a letdown - it’s far too complicated for its own good, with layer upon layer of restrictions and selections to make your character perform a simple action. In fact, because of all the complication from the AD&D system, Atari borrowed Dungeon Siege’s "pause" feature to let you select actions while freezing the game. This slows the game down even further, creating a game that is not fast paced enough to live up to Diablo II, and, since you only control one character, doesn’t have as much strategy as Dungeon Siege.

The combat itself is simple, but has some novel concepts. For instance, the game introduces “feats” that allow you to use magical abilities during combat. However, these feats don’t mean much and combat basically comes down to clicking on a creature until it dies (haven't we already had enough of these pointless games?). However, combat becomes completely idiotic once creatures begin getting “attacks of opportunity.” Basically Atari added in this “feature” as a way for the monsters to cheat and hit you over and over again so you die and, therefore, the gameplay time is "extended" so they can boast their game takes "over 60 hours to solve the single player version." Oddly this usually only happened with mages and archers, obviously as a way to balance them instead it makes everything but fighters nearly impossible to play.

The magic in Neverwinter Nights seems interesting at first in the fact that it doesn’t use the universally accepted RPG magic power mana. Instead you can use only what spells you choose at the game’s start and after that you’re doomed to attack with nothing but ranged weapons and staffs. This makes wizards and sorcerers basically useless (unless they are fighting against you and cheating). Not that the spells are any fun to use; they’re all lazy, generic fantasy tripe like fireballs and “magic missiles.” You’ve seen all these spells done better in most other games, such as Heroes of Might and Magic 4 and Dungeon Siege. 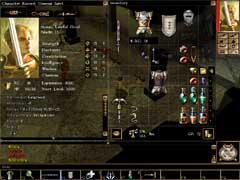 The third edition AD&D system serves only to confuse the player and attempts to distract from the game's shallowness.

The level design is mediocre and bland, and yet devilishly frustrating at the same time. Everything is static and tile-based, which is a sad shortcut for a developer to take in this time of dynamic game engines. Traps are sprung at your feet every few steps with no way to be stopped the only possible way past them is reload the game over and over until you learn the correct way to avoid each and every one. There are spells and items you can use to disarm the traps, but you have to use cheat codes to create a character powerful enough to successfully take them apart.

The plot is, as expected, merely a break between the action, consisting of talking to NPCs to find out where you have to go next and which set of monsters you are required to kill. This isn’t too much of a fault since the majority of action RPGs are the same way. If you wanted a great story, you'd buy Final Fantasy for the Gamecube. Also, the setting is quite bothersome, as it is the very epitome of generic fantasy with no distinguishing aspects to it. There's only so many bland castles, roads, and woodland areas I can take before becoming extremely disinterested.

The 3D graphics are better than Diablo II’s pixelated 2D fare, but are almost directly ripped off from Dungeon Siege. Unfortunately, they aren’t even nearly as good, as the tile-based levels of Neverwinter Nights don’t look nearly as organic as Dungeon Siege’s handcrafted world, a world which can be built with a polished, professional level editor (unlike Neverwinter Night's bulky, cumbersome, crash-prone editor).

It’s no secret that, unlike Diablo II, the main focus of Neverwinter Nights is the single player. But still, as an afterthought, Atari included a multiplayer mode. There were quite a few servers online when I tried this, but the single player world doesn’t lend itself to multiplayer very well and Atari didn’t bother to make a multiplayer-only world ala Dungeon Siege. It’s too bad the concept of modding a game is restricted to the FPS genre, as Neverwinter Nights is sorely in need of something like this. Patches and expansion packs will probably ensue, but nothing can make up for this shortsightedness on Atari’s part, and quite frankly, I'm not interested in paying EXTRA money for a product or service I was originally promised in the first place!

So is Neverwinter Nights the Diablo II killer it was promised to be? Sadly, no. It isn't even a Diablo I killer! The game pretends to be so much that it’s not and comes off as a lackluster, slow-paced Dungeon Siege. I’d suggest saving your money for the next big MMORPG or expansion pack for Dungeon Siege.