The Fibular Fables of Groggery Gibbonman 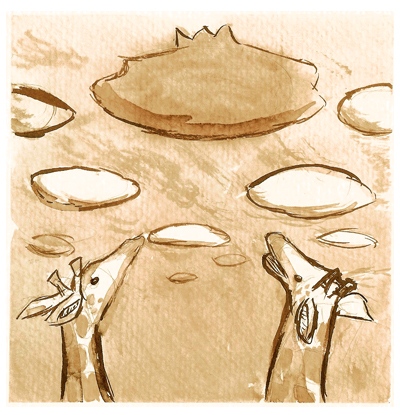 Two giraffes, who as all traveled men know enjoy gazing at clouds, were engaging in their famous hobby one day when a particularly interesting specimen wafted into their view. A great dark storm cloud heavy with rain, hanging with distinction in the otherwise white-dotted sky, appeared above the buzzing hot savanna grasses.

"That cloud..." said the first giraffe, as he gestured toward the culprit in question. "...that cloud is the emperor of clouds."

"How can you tell?" asked the second giraffe. He squinted his eyes to make out the cloud's details, but still he could not understand what distinguished it from its brothers so.

"Don't be daft!" chided the first giraffe. "He is clearly regal! Can't you see his crown?"

The second giraffe squinted his eyes even further, and turned his head as much as his cumbersome neck would allow.

"I guess ..." he said quizzically. "And look, that one looks like an elephant!"

"Forgive him, emperor!" cried the first giraffe unto the heavens. "He does not know his insult, oh mighty lord of all clouds, bringer of storms and salvation!"

"MY FORGIVENESS BE NOT CHEAP, NOR EASILY GIVEN!" rumbled the emperor of clouds. "SACRIFICE UNTO ME A NEWBORN HUMAN CHILD"

"Yes, my emperor! I will do this for you at once!" groveled the first giraffe, punctuating his promise with a reverent bow.

"Who are you talking to?" questioned the second giraffe. But the first giraffe did not answer him; instead, he lopped into his long-strided run, as fast as a giraffe could hope to, toward the nearest village of men.

"Hey, where are you going?" called second giraffe as he ran after his friend, through the grasses and the groves and over the wall of the village of men. "Hey, First Giraffe! What are you doing? Why are you... oh god! Oh god, what are you doing!?"

The moral of the story is: Do not fuck with the emperor of clouds. 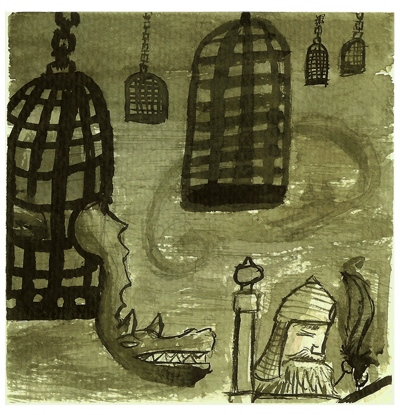 Many winters back, in a great domed castle in the snowy black woods of a coniferous kingdom far to the biting north, there ruled a Czar. He was mighty and bold, and his people revered him. Great and powerful, they said, and good and wise was he, and it was whispered in places that he had slain great beasts, and it was passed around corners that he communed with dragons. Talk of fate and magic, of seeing the future. And it was all true.

For in that Czar's tower, above his mighty throne, there hung a cage, and in this cage there hung a head; the head of a dragon, a sad defeated thing. The Czar, who had been the victor in their long-past battle, sat at his throne of velvet and carved wood, a quill to parchment, and listened to the dragon's words of prophecy.

The Czar scrawled the prophecies of the old dragon.

"No, the west!" said the other dragon. For the mighty Czar was so great, in fact, that he had tamed not one but two dragons in his life. And it hung its head just the same as its companion in the throne room, and it spoke of prophecy too. Upon hearing its dissenting voice, the Czar cringed and furrowed his regal brow.

"He will come from the west, and you will know him!" the second dragon continued.

"No, he will be a stranger" chided the first dragon, as the czar scratched out parts of what he had written. "A stranger will come from the East and bring great misfortune..."

"He will come from the West and bring great fortune!"

The czar scratched and re-scratched, and swore beneath his breath. "Which is it, you fickle waffling beasts!?" he bellowed up at the cages. "East or West, make up your blasted minds!"

The dragons thought, and consulted.

"Graaaaaaa!" bellowed the Czar. He ripped the parchment to pieces and banged his head upon his writing desk.

The moral of the story is: The future is best viewed one-at-a-time. 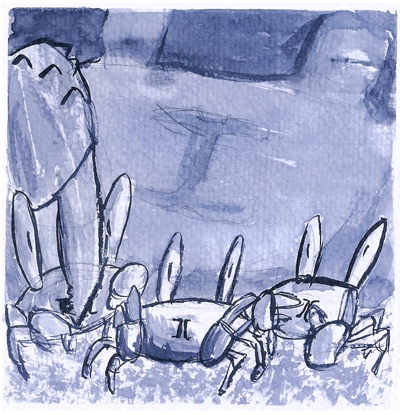 Once, on a sandbar white with wild sands, at the delta of a gentle stream, there lived a family of crabs. And though the littlest crabs were scolded by their father, a crab as stern as crabs could be, they could not resist exploring where they ought not to.

"Do not go near the cliffs, little crabs!" scolded father crab. But there they went, and skittered and played.

"Do not go near the nests of birds, little crabs!" lectured father crab. But there they went, and pinched at feathers and poked at straw.

"Do not go into the caves, little crabs!" insisted father crab. But there they went too, and laughed at their father, not knowing he had snuck behind them.

"You caught us, Father Crab!" laughed the little crabs, who had learned their lesson. "We're sorry!"

"You are stupid, to come here where your mother can't stop me anymore," said father crab. He began to pull the legs from the little crabs and eat them.

"Why, father!? WHY!?" begged the little crabs, as they died.

The moral of the story is: Trust no-one.

Ian "BFM" Helm not only writes and illustrates Gibbonman's fables, he also ... I guess that's it.