Traitors in the Ghetto

I was thumbing through my quarterly copy of Jane's World Militaries yesterday, brushing up on the next Central American government I would like to topple, when my secretary came in with an important breaking story fresh from the wire service. There had been an explosion at the Saudi General Security building in my old stomping ground Riyadh. Immediately memories of the long talks Colonel Ibrahm Fayeed and I used to have over cups of chai flooded back into my head. I wondered if his mustache had survived the blast. I soon learned that Colonel Fayeed and most of the staff at the SGS building had survived, although Ibrahm was inches away from a piece of shrapnel that would have certainly killed him.

Al Qaeda quickly claimed responsibility for the attack. This was no big surprise to me, as Al Qaeda will claim responsibility for a nine year old drowning in a pool if they think doing so may damage Western interests. What was a surprise for me was the way Al Qaeda went about disseminating the claim. Instead of the usual neatly typed press release sent to Al-Jazeera the terror network had used the power of the Internet to get their message out. Not just any Internet either, they had used the Information Super Slum of Geocities. According to a good friend of mine named Paul Eedl who makes tracking Al Qaeda on the Internet his business Al Qaeda had posted about the bombing on a Geocities web page.

I had long suspected Geocities of harboring terrorists. Only the most corrupt of virtual governments could ever allow such a hideous hive of treachery to flourish, and based on past experiences Geocities was the only site morally bankrupt enough. This treason, this utter betrayal, so close to my own stomping grounds was intolerable. With a righteous heart, a keen mind, and an unwavering commitment to judging others I set forth through the collapsing tenements of Geocities. It is my patriotic duty as an American to bring you now a comprehensive list of the Al Qaeda sleeper sites I have discovered on Geocities. Their subversion of freedom shall go on no more! 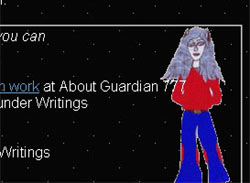 Content: Guardian 777, also known as Hamma Al Rahini, has set up a site using Christian and anime theme fan fiction as his cover for transmitting clandestine information to Al Qaeda operatives abroad. The majority of the content on the site are vaguely Christian science fiction stories that are so bland and repetitive they could have been written by rolling random encounter tables in the Star Wars RPG game. These stories merely serve as a distraction for the actual Al Qaeda communiqués. These coded messages are located in the section on the site called "Fanfics Outlines". I have yet to decode all of these but those that I have deciphered I offer freely to the intelligence community.

Coded: The new player - A female warrior appears on the scene
Decoded: The plan to blow up the Statue of Liberty is proceeding on schedule.

Coded: Trunks' girlfriend - and it's not Merron or Pan
Decoded: Al Rahini has made contact with an Al-Qaeda cell in New York to assist with the plan to blow up the Statue of Liberty.

Coded: Contact - Another alien race contacts the Z warriors for help
Decoded: Cuban agents of Fidel Castro have made contact.

Coded: Contact 2 - An alien empire far away offers assistance
Decoded: Cuban agents will provide explosives for the attack on the Statue of Liberty.

Coded: Vegeta's Horror - His daughter marries a pacifist
Decoded: One of the members of Al Rahini's cell has gone turncoat and is trading intelligence with the FBI in exchange for a plea agreement.

Coded: Goten's Race - Goten must find the dragon balls before Pan or Trunks will be in trouble
Decoded: Al Rahini, concerned of increasing FBI attention on his actions, has given the task of planting the explosives in the Statue of Liberty to one of his compatriots.

Coded: A new Sailor Scout appears - The Christian Scout
Decoded: Agents of Western Hegemony have begun to infiltrate one of Al Rahini's sister cells in the UK.

Coded: Another Sailor appears - He's cute
Decoded: The UK cell has identified a number of potential recruits for their cause.

Coded: Romance between the two new scouts
Decoded: The recruitment is going well.

I have much work still to do with Guardian 777's Al Qaeda site, but I promise the decoding of enemy intelligence will continue as long as I draw breath. 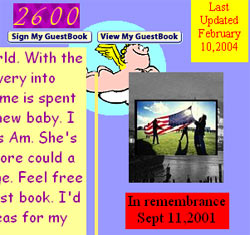 Content: It took me quite some time to realize that Kristy's Page was actually a front for some of the most secret Al Qaeda information. On its surface the site appears to be a quite normal and droll personal web page featuring a woman with nothing interesting to say who posses a rudimentary ability to use front page and enjoys posting HTML-resized images of herself. Hell, there is even a September 11th dedication on the front page. I was about to dismiss this site as nothing more than your usual Geocities crap when I decided, on a whim, to open one of the gigantic images of Kristy in Wordpad. A quick keyword search for "ALLAH" later and I had identified strings of text inserted surreptitiously into every single image on the site. I have provided an example of the hidden code in one such image to demonstrate how cleverly the Al Qaeda supply network communication is. My advice to members of law enforcement agencies is to open each of the images and do a keyword search for "ALLAH" as each of their hidden messages seems to begin and end with praise for the blasphemous dread God of the East. 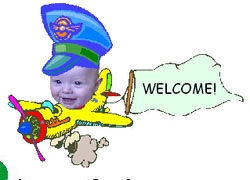 Content: Ostensibly a garishly ugly web site devoted to a custom baby book business, A Blissful Creation is actually one of the most sinister Al Qaeda Geocities sites I have uncovered. I knew from the moment that the page loaded that something was askew as the baby heads plastered haphazardly over clip art seemed decidedly sinister. It wasn't until many days later that I had an epiphany. After learning of a deadly Al Qaeda attack on a Kellog Brown and Root contractor working in Iraq I looked up information on the victim. Among many glowing letters and articles about Donald H. Lodi I found a photograph of him as an infant.

Moments later my discovery had been confirmed; Al Qaeda was using "baby code" to identify future targets for assassination. Each of the photographs on A Blissful Creation is actually a past or future victim of an Al Qaeda attack. My only guess is that Al Qaeda operatives maintain vast databases that consist of the names and infant pictures of tens of thousands of enemies of the terrorist organization. When one is to be targeted for elimination the cell operating A Blissful Creation will clumsily paste their baby photo onto a piece of clip art and post it on their Geocities site.

Click the image for a full-sized view.Cover: Borderline Dadaist humor web site that is so incoherent and random it defies accurate description.

Content: The Keilbasa Club is the one Geocities site I uncovered that I knew instantly was a work of Al Qaeda terror groups. It seems to be a vaguely Polish humor site with a blue collar bent, but there are no actual jokes on the site. Instead every mysterious link directs the user to a low quality WAV file of a nearly random sound effect. Despite my immediate suspicion it still took several days of poking and testing to actually locate the means by which Al Qaeda was using the web site for communication.

It turns out that the WAV files attached to each link are rotated on an almost daily basis. I collected all of the WAV files from one day's post and tinkered with them in an audio editor. This revealed that when any given batch of audio files are converted to the same frequency and then layered over one another they form a brief Arabic audio message. For April 19th this audio message was "Al Saha el Jammir" or "The Red Condor". I am still investigating what or who exactly "The Red Condor" is, but I believe it might be the name of a cell or man operating in Northern Pakistan. 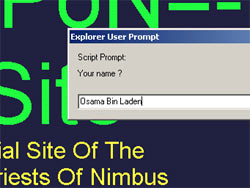 Click the image for a full-sized view.Cover: A visually offensive guild website for a mysterious online game.

Content: Potentially the most cleverly constructed of the Al Qaeda sites, HPON utilizes a seemingly innocuous Javascript name prompt to personalize the site for each user. Many really bad web sites use similar Javascripts but a little poking in the strangely encrypted code for the Javascript revealed that certain names actually altered URLs used on the site. Thus began a long and tedious process of trying a variety of known Al Qaeda codewords to change the link to HPON's "old site" to a more meaningful link. After several hours and working on multiple tasks simultaneously I hit upon "The Red Condor" from the Keilbasa Club. Entering this worked, changing the URL from a link to HPON's meaningless older web site to a link to an all-Arabic message board. Most notably one of the users on the message board had an image of a Sailor Moon character as his or her avatar. This, coupled with veiled references to London landmarks, leads me to believe that HPON is the front for the British Al Qaeda cell that Hamma Al Rahini is in contact with.

My search for Geocities fronts for Al Qaeda continues. I will keep you updated as more information surfaces, and may the twin Gods of democracy and freedom defeat the ingrate pagan lord of the infidels.

By the way, don't email me to tell me the sites I linked are down. Roughly five people an hour can view a Geocities web site these days. Just know that when you click on a link you are protecting America by denying the terrorists their safe havens.

The Art of Photoshop Phriday

Well hello there, little reader! Livestock here, letting you know that we've once again set our sights on art. This week the Something Awful Forum Goons were tasked with recreating famous events from history, movies, pop culture, and elsewhere using classic paintings as the base. Here is an example of what something like that looks like. And here is another link that will take you to the Photoshop Phriday Internet website. Click here to add to cart.