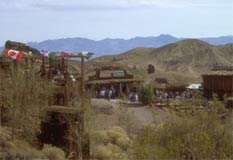 These happy tourists can tell you that everyone loves a ghost town!A fixture of the Western film, "ghost towns" have provided many an hour of spooky atmosphere for otherwise generic cowboy stories. Sometimes they crop up outside the Western genre, in say horror movies or re-runs of "Scooby Doo". It's a little known fact that more than 80 episodes of "Scooby Doo" were either set in a ghost town or made mention of a ghost town. It's no surprise that cities across North America have been jockeying to be declared "official ghost towns". After all, there is big money to be made in declaring your town a ghost town since it attracts two things in order: ghosts, followed immediately by tourists.

Back in the 1950's you didn't fight to get declared a ghost town. Back then the Federal Government would send investigators to see if you had ghosts in your houses, rickety general stores, saloons, and ground water. They used chemical tests. If a strip turned blue it contained enough ghosts and the town was declared a ghost town. Nowadays things are obviously different. These communities have to hard sell the legislature on making them an officially recognized ghost town. Why make it official? Well, if it's not official you can't get the zoning permits for ghost attractions. So a mayor can say his town is a ghost town, but unless he can jockey for official ghost town status he can't put up a ghost ranch or a ghost bordello. Inspectors will shut them down.

I have a lot of empathy for the would-be ghost town mayors of America. I consider myself something of an arm-chair mayor ever since I played the Sims and got my guy to stop pissing on the floor by putting a toilet in every room of his house. I know the tribulations they go through day in and day out, dealing with citizens who are too busy thinking about musical notes or sleeping to pick plates of food up off the floor of their kitchen. To help my brother mayors I have put together a little guide to making your town into a successful ghost town. Not one of those cookie-cutter franchise ghost towns either, those are a fast road to having a ghost Wal-Mart controlling the commerce in your town. 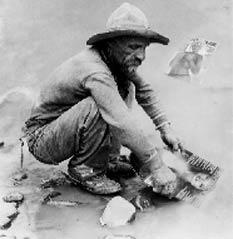 STEP TWO: Prospectors are very rowdy and will build a lot of brothels and those inflatable rooms that you can jump around in that they have at county fairs. They also tend to make a lot of moonshine. These things will all work to creating that "ghost town feel" you're looking for; at least once you get rid of all these filthy prospectors! But before you get rid of them you need to have a nice big gun fight in which the sheriff of your town in shot dead. It can be hard to get the sheriff shot to death, but two key ingredients in any violent death are alcohol and the song "Here and Now" as performed by Luther Vandross. 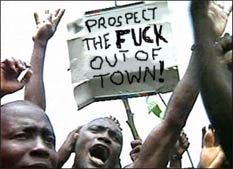 Get the angry townspeople to drive those prospectors right out.

STEP THREE: The devil liquor and a little Luther Vandross has turned a few gun wielding prospectors into cop killers, now while the prospectors are at an all time popularity low, get rid of them! Put together a torch and pitchfork wielding mob and run them all out of town. Your mob is welcome to set fire to prospector-related buildings during their maddened rampage as a few torched building will only add to the atmosphere once your town is teeming with ghosts. Do not let them set fire to any saloons! These will be the mainstay of tourist commerce in your ghost town and can easily be converted to sell ghost plush toys, humorous WANTED posters, and Luther Vandross precious moments figurines along with the usual sarsaparilla.

STEP FOUR: You've got your empty town but it isn't going to do you a whole feedbag full of good if you don't have any ghosts. As vengeful spirits of the departed, ghosts are not interested in things like creaky old Victorian mansions or musty ossuaries, they want bright colors and lots of fun. Ghosts like techno music - "Techstep Terrorcore Goa" to be exact - so play this over loudspeakers all of the time. Lots of flashing lights in various colors and patterns will help. Basically you need to get your entire town to resemble a gay disco. It might attract some regular gay people in addition to the ghosts, but they can be scared away by building a lot of public bathrooms with pre-drilled holes in the walls of the stall dividers.

You can help make your town more sensually pleasing to ghosts by remembering the following informational tidbits about them:

Ghosts do not wear hats so do not open any hat-related store or offer any hats in the saloons. If you do so you will make them feel ashamed and they may begin to cause books to fly off of shelves or force beds to levitate.

Ghosts are afraid of Bald Eagles. Shoot all eagles in a twenty mile radius around your town.

For safety reasons you should fill all open wells with dirt to prevent ghosts from falling into the wells and becoming trapped haunting a well for all of eternity.

Ghosts float and therefore cannot sit down, remove all chairs from the town.

Do not under any circumstances allow Pac Man or Power Pellets anywhere near your town or you will have fucking genocide to deal with.

Oh yeah, don't worry about the wells because I just realized if a ghost falls into a well they can just float out.

Hopefully those will help you put together a ghost-friendly environment that will attract thousands of specters and spooks.

STEP FIVE: Marketing is your friend! Put together some television spots talking about how spooky your new ghost town is. Possibly show a poorly blue screened skeleton moving around while video of various exciting locations in your town plays in the background. If you can add a glow effect around this skeleton this would be really cool and might make it look more like a ghost. You can't show the real ghosts of course since real ghosts do not show up on film. With a surefire hook like that the tourists, and more importantly the money, will come flooding into your town!

Fellow mayors, I sincerely hope that this article has helped you put together your own plan for turning your boring regular town into a hip and fresh ghost town. Good luck and remember, "Boo!" means the ghosts are working not that visitors are disappointed in your town.

There's a new name in voodoo record producing, and boys and girls, that name is The Horrible Dr. Bone$! Come take a look at this horrifying movie review about a horrifying voodoo doctor just dying to get his horrifying meathooks into a zombie army. 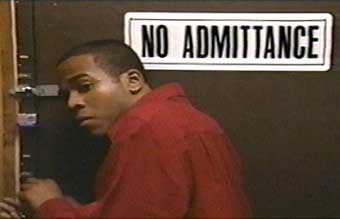 HE IS HORRIBLE! HE IS FULL OF BONE$!