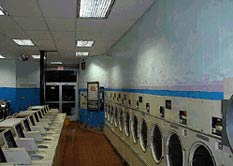 Sweet Laundromat solitude, denied me by this infernal city!!!Other than those 18 or so years with my parents I have very little experience with the convenience of owning my own washer and dryer. I remember griping incessantly about the hideous task of having to do my own laundry and now, with a little age and wisdom, I see just how easy I had it. Going to the Laundromat is not fun. No one enjoys it unless they were in some sort of industrial accident involving a pneumatic hammer that also makes them enjoy getting kicked in the groin by livestock.

Laundromats in Ohio were best visited during the wee hours of the morning when they were completely emptied of customers cleaning the cooking grease off their Nascar #3 smocks. Barring the occasional run in with a homeless lunatic (it happened roughly half the time I went) it was very quiet and I could just do my laundry and read a book. Once I moved to Chicago the three AM visits to clean my clothes were right out. To my corn-fed mind Chicago at three AM is as bad as Beirut during the height of the intifada. I'd be lucky if I made it three blocks before a pick-up truck overloaded with Arabs started shooting RPGs at me.

No, it's daylight visits only for me, thank you very much. I have been making bi-weekly trips to the nearest "Spin Cycle" Laundromat since I moved here and I have come to the conclusion that a Laundromat during normal human operating hours generates an ecosystem every bit as real and diverse as the primeval jungles of South America. Thursday when I went to do my laundry I took along my notebook and took careful notes on the various species of beasts cleaning their laundry. I left out the "Pasty Skinned Comedy Web Site Hack Writer" since by now I think you're all very familiar with that particular type of animal. 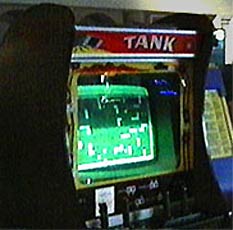 Teenager Who Comes In to Play Video Games

Description: Everyone knows that a Laundromat has the best video games ever! Ranging from a stand-up of Pole-Position that fell off of a truck that was taking it to a trash compactor to that game that was a plastic car and a wheel with a road drawn on it that spun beneath it, Laundromats have the hottest titles! Knowing this, the "teenager who comes in to play video games" brings a sack full of quarters and absolutely no laundry. Instead he takes up a position at the worst game in the entire place second only to the out of order vending machine and proceeds to pump quarter after quarter into it while cursing wildly.

Aggressive Behavior: The TWCItPVG is not overly aggressive, although when threatened by a particularly trying round of "Crystal Caverns" he will curse loudly so that everyone knows he is not to be trifled with. He will than kick the machine repeatedly and condemn it as broken even though Crystal Caverns was a game intended for six-year olds and was designed to withstand an entire cup of kool-aid being upended into the control sphere.

Ecosystem Hierarchy Position: Outside of the hierarchy because he does not do any laundry. He is a tolerated interloper but a frequent enough one to be included as a part of the ecosystem.

Young Child Who Wanders Around Unsupervised

Description: People who come to the Laundromat frequently bring one or more children. You would think it would be fairly easy to supervise them while you were doing something as sporadically demanding of your attention as laundry. However, within the laundry ecosystem you are absolutely required to ignore (or pretend to ignore) every other living thing including your own offspring. This means that the children who tagged along with the "woman with 500 trash bags full of laundry" (see below) will wander around the Laundromat completely unsupervised.

Aggressive Behavior: The "young child who wanders around unsupervised" is the most aggressive animal in the Laundromat ecosystem. He is absolutely fearless and will approach anything or anyone without the slightest hesitation. He is prone to insert objects into his mouth that seemingly exceed the limitations of his jaw structure. He will ask you questions in a shouting voice about items such as "why do you smell like farts?" or "how did your boobs get so ugly?" He will cry for no reason at all and demand ice cream from his mother who is carefully obeying the laws of the Laundromat and pretending he does not exist. He will even approach the teenager who came in for no other reason than to play video games and tell him that "I have this game at home and it's easy, you're not doing it right."

Ecosystem Hierarchy Position: While the "young child who wanders around unsupervised" is near the bottom of the hierarchy within the Laundromat, it is a cunning opportunist. As mentioned previously it will insert anything into its mouth and this might include your laundry, your change for doing laundry, or even your laundry basket. There are rumors of a 40 foot long unsupervised child in the deep Laundromat that is capable of swallowing an entire 5-Load high speed washer. 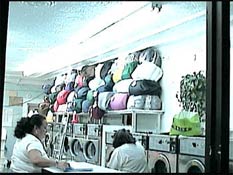 When all of the washers are full she puts her trash bags on top of them, thereby "marking" her territory.

Description: The origins of the "woman with 500 trash bags full of laundry" are shrouded in mystery. Does she work at an orphanage? Does she have 20 children? Does she only do laundry once a year? Did she find a dumpster full of dirty clothes that she is cleaning to resell at Goodwill? DOES SHE EAT CLOTHES? We may never know, but what we do know is that this woman does a fucking lot of laundry. She almost always arrives in a van and it is safe to use the verb "crammed" when describing how the laundry was inserted into the vehicle. When she opens the side door trash bags full of filthy underwear erupt out of the van like spring-snakes in a surprise can of peanut brittle. She is never attractive because pretty women would use some sort of crazy Laundromat seduction dance to lure the video game kid into doing the laundry for them.

Aggressive Behavior: Normally she is very docile. She has a lot to do though, so if you get in her way expect her to use extreme measures to ensure that she can get back on task. Do not stand in her way at any of the detergent or fabric softener vending machines because, while she invariably brings a 500 gallon drum of her own secreted detergent, she may somehow misplace it. If you're in her way in her time of need you may lose an arm, leg, or face. This goes double for if you are in her path when she is attempting to remove her 50 loads of laundry, so do whatever it takes to select a dryer or washing machine far away from the ones she is using.

Ecosystem Hierarchy Position: Silently at the top. She commands a lot of respect from all other members of the ecosystem except for the "crazy homeless man", who respects nothing. Most people show this deference by avoiding her so that she remains calm and quiet. She sometimes is inadvertently provoked by the "non-English speaker who insists on controlling the TV", although often she will be a non-English speaker herself and not prone to caring about the Television, instead reading magazines written in some crazy moon language with pictures of exploding pets on the cover.

Description: The one holdover from my late night visits to Ohio Laundromats and my morning or afternoon visits to Chicago Laundromats is the "crazy homeless man." They are literally everywhere, and Laundromats are their bases of operations. They enter the Laundromat with two purposes; to use the bathroom and to get a drink of water. However the "crazy homeless man" is a curious animal who is starved for social interaction and he can be almost as abrasive as the unsupervised child, but with the added bonus of being physically menacing.

Aggressive Behavior: The "crazy homeless man" rarely poses a physical threat, but the unpredictable way he can behave is full of menace to anyone who is nearby. He enjoys looking around and may hold his head at an odd angle while babbling about Bible verses that don't exist as if to say "I have a screwdriver in my sock". While there is no direct threat, there is an implied threat, and all within the ecosystem would do well to stay clear of him.

Ecosystem Hierarchy Position: As mentioned previously, he is roughly equivalent in station to the "young child who wanders around unsupervised". He is both a nuisance and a vital part of the complex cycle within the Laundromat and he is as much of an opportunist as the unsupervised kid. He will drink an unattended week old cup of chewing-tobacco spit if he is fairly certain no one wants it anymore.

Description: Everyone needs to use the Laundromat, even crazy moon people like the "non-English speaker who insists on controlling the TV". He can be identified the moment he walks into the Laundromat by the strange bag he is carrying his laundry in and the confused expression of someone in a world that they are unaccustomed to. He is one of the most rigid adherents to the code of the Laundromat, and immediately after jamming his moon clothing into a washing machine he will stand in front of the TV and begin to switch channels. He will never stop switching channels, because there are no moon people channels even in Chicago. Sometimes he may grow tired and tune the TV to static, which is closer to a moon person channel than say CNN or Telemundo. If you're actually lucky he IS Spanish-speaking and puts on Telemundo, at least that channel is entertaining and overrun with gorgeous Latino women.

Aggressive Behavior: He is only aggressive when it comes to control of the TV. He refuses to watch anything that makes the slightest bit of fucking sense since in moonland or wherever he's from TV shows are usually about things like screaming animals flying through helicopter blades that sing Abba songs. If you start to approach the TV during one of his lulls in channel changing he will suddenly leap towards the TV and begin rapidly flipping through the channels again. It may be possible to pry him away from the television by using brute force, but this is ill-advised because of the many secrets that moon people keep.

Ecosystem Hierarchy Position: Next to the woman with the 500 bags of laundry, the moon man TV changer is at the top of the heap. He only controls a small piece of Laundromat landscape, but he is very territorial when challenged and most recognize this and avoid any conflict.

There are many more archetypes and species within the Laundromat daytime ecosystem, so diverse in comparison to the barren nocturnal Laundromat, but these were the ones which I documented. When I venture out again I will be sure to keep a pencil handy at all times to record any new discoveries. Truly, for a naturalist such as myself, the Laundromat is a pristine haven for species as wondrous as the Galapagos islands.

This week's Photoshop Phriday is a real optic blast of flavor as the Goons got busy and decided to give a bunch of superheroes and super villains new jobs where their powers are wasted. But it's not all bad. In cases such as this one, it makes them more useful: 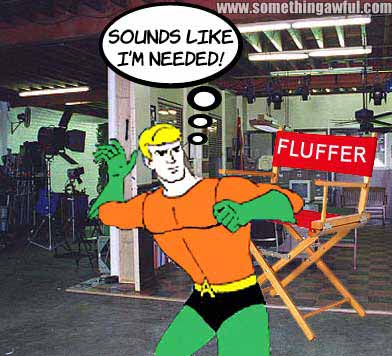 It is in your best interest to view Photoshop Phriday!