Late in the 21st century, most human recreation is performed by robots. Every night, the robots go to bars and nightclubs and transmit the experience to their human masters. At the end of the night, the robots must return to their factories to be destroyed. This is not called execution. It's called closing time.

Charlie and I are 24-hour partybots - so-named because we have a built-in lifespan of 24 hours. We look like normal humans. We're at The Tourist, a popular robot bar. Everything we feel here - loneliness, depression, weltschmerz, anhedonia - gets beamed back to our human owners via wireless nerve implants.

The Tourist is kind of a dive. Someone is waving a broken bottle at the flair bartender, who fights him off with one hand while juggling limes and cocktail shakers with the other. We're glad to be off the street, though. Terrorists have been leaving pipe bombs on the sidewalk, disguising them as surrealist art by writing "Ceci n'est pas une pipe bomb" on them.

We're sitting at a table by the stairs to the door. At the end of the bar, talking to some prehumanists (people who have genetically transformed themselves into apes or fungi), sits Ani Levator. Her eyes shine like the Louvre Pyramid, nights in Rio, and those plastic cases that new headphones come in. Her jawline is so sharp it cuts the photons in the air. All night I've been trying to work up the courage to go talk to her. I wish I could become an extrovert simply by flipping a switch, but actually it involves a dial on the back of my head.

One of the fake memories I've been given to feel more human: I'm six years old and playing in a sandbox. Just as I bang my toy hammer on a rock, a freak particle accelerator accident at M.I.T. makes the entire universe implode. For several weeks, I think I imploded the universe.

"I see you checking out Ani Levator," Charlie says. "Forget it. She's out of your league. Besides, I'm the only companion you need. Remember all the great times we've had?"

"Like when you shot me with an ossifier ray that turned me into a statue and left me in the park?"

"Okay, as tainted as those times may seem now, they got you through a difficult period in your life."

"I'm switching to extrovert," I tell Charlie, who's an extrovert. I turn the dial on the back of my head and instantly the room becomes a negative image of itself. Creatures that look like pale babies float in the air. They have large black eyes but no nose or ears. One raises a clawed hand and shoots a glowing blue orb at me. I dial back to introvert just before it hits me. I give Charlie a horrified look.

"I'll buy you a drink," he says to either me or the babies.

I make up my mind to go talk to Ani, introversion or no introversion, and stand up. Just then, the guy at the next table, who's been talking to a girl, gets friend zoned. "Friend zone" is kind of a misnomer, since it's actually an interstice between the zones of dating and bachelorhood. In the friend zone, one is neither alone nor attached, a quantum paradox that destroys one's being on a subatomic level. The guy chugs his drink just before he disintegrates. I sit back down.

"What kind of drink do you want?" Charlie asks me. "A Heineken? A craft beer?"

"Definitely a craft beer," I say. I don't know what a craft beer is. I also don't know the president of Argentina, the atomic weight of cobalt, or what those things at the ends of shoelaces are called. Sometimes I wonder how there's any room left for me in my head between all the things I don't know. I excuse myself to the bathroom. 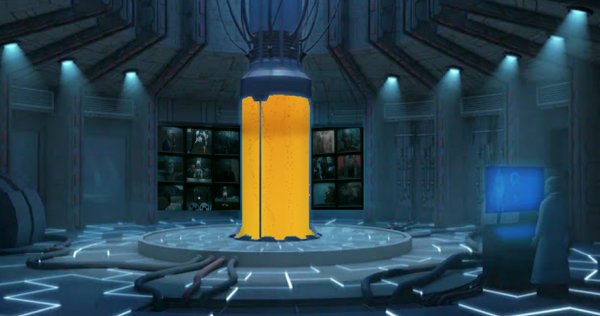 What I think is the bathroom door actually leads to a room behind the bar. In the center of the room sits a large glass tank of amber liquid. Surrounding the tank are TV screens showing car crashes, disaster footage, the 9/11 attacks.... The bartender stands on a ladder sampling the liquid with a ladle.

"I'm making craft beer," he says. "It's made by exposing barley-filled water to the horrors of the world, which causes it to ferment."

"I know," I say. On the screens, people are shot, stabbed, electrocuted, soon to be forgotten by everyone but the beer. I too will soon die, never knowing the sweet touch of Ani Levator. In the face of these facts, a free drink seems moot.

"You're a partybot, aren't you?" the bartender says.

"Bots always look depressed when they see the screens. They lack the human capacity for schadenfreude."

"That's a myth," I say, "just like the one about our, uh, size. We only have two petabytes of memory. But how can you not be depressed when this" - I gesture at the screens - "is everywhere?"

"The world needs horror," the bartender says. "It's an essential part of life."

"Because it helps us make craft beer, which helps us forget all the horror."

"Yeah, but can't you bots process circular logic these days?"

On one of the screens, a woman brushes her hair while a zombie stands behind her. It's unclear if she's unaware of the zombie or just ignoring it.

There's something bittersweet about the early AM when the bars have all closed and you're riding the subway back to the robot factory where you'll be deactivated and lowered into a vat of acid that will strip your synthetic flesh, leaving only your titanium skeleton to be sold as scrap metal. Everyone in the subway car is tired, reticent and developing a hangover. In the tunnel, rats fight over human bones, and homeless people spray paint obscene emojis on the walls.

But I barely notice. Like everyone else, I'm looking on my phone at the pictures I took tonight. There's one of Charlie posing with the monster babies, who are giving a double claws up. In another, Ani Levator and I are sitting together after we've finally talked, made out, and won at bar trivia so decisively that they had to retire the game forever. (Charlie told us to "make love to the camera," but I wasn't sure what that meant, so I peeled off my face, fully exposing my eyes, teeth and biomechanical musculature.) The images are immensely satisfying.