I love the Flintstones Era. So I decided to live in it.

My wife and I study cartoons, specifically the late Flintstones era of 1965 and 1966. Our methods are quite different from those of most cartoon viewers. Everything in our daily life is connected to our period of study, from the technologies we use to the ways we interact with the world. 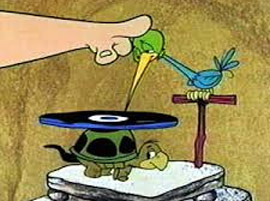 Five years ago we bought a house built in 1988 in the town of Bedrock, Indiana - a town that met all of our qualifications of having a drive-up restaurant, a stone quarry where I could get a job, and very lenient laws about street legality of vehicles. When we moved in, there was an electric fridge in the kitchen: We sold that as soon as we could. Now we have a period-appropriate bird that waves a fan at our food to keep it cool. Before the first wave of that fan I had to spend two weeks teaching the bird to look a guest in the eye, shrug his wings, and say, "It's a living." Most of the time he just makes car alarm sounds and plucks out his own feathers.

Every morning I wind the bird inside the clock in our parlor. Each day I write in my diary using an antique pen that's actually a bird and I dip his bill into an inkwell before each stroke. All of our birds come from the same breeder who we single-handedly keep in business by paying him to train various birds to operate or replace all of the appliances in our home. Did you know birds are the closest living relative of the pterodactyl? Until our bird breeder can get one of those, parrots and magpies are as good as we can do.

There are no modern lightbulbs in our house. We go to sleep as soon as it is dark. When my wife and I have company we use the bird that lives under the lampshade. We also have a raccoon that works as our dish washing machine, a small monkey that holds a watering can over us in the shower, a baby elephant that sucks up dirt from our floor, and an electric razor made from a clam shell with a bug vibrating inside. 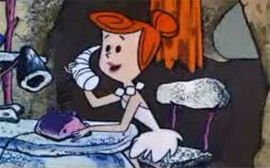 That last one regularly gouges my face and I replace the bug every time I want to use it. The one thing the Flintstones never really covers is how much feces all of these animals produce. There is a three-inch layer of appliance scat covering the floor of most rooms in our house. Parrots have an astonishing capacity to defecate.

Neither my wife nor I have ever had a cellphone; There's just no bird that will fit inside your pocket and perform even the basic functions of a phone. We did some experiments with strings and cups, but the little bird that chiseled our texts onto tiny stone tablets broke the fourth wall and talked to the audience with infuriating frequency. When we want to use a phone, we pretty much just hold a seashell up to our ear and stare off into space.

Living the Flintstones lifestyle in our late-Flintstones household means embracing everything that occurred late in the run of the series. That means owning a purple sheepdog named Dino and incorporating the Great Gazoo, the magical alien from the future, into our house. We tried several monkeys, which tended to become enraged by the green paint we had to cover them with and who would not read any of the lines we had chiseled into rocks for them to read. After a little experimenting with a particularly large parrot in a skull cap, we decided on a small Mexican man who does not speak English, but will read anything we write out phonetically. I have caught him watching my wife sleep more than once, but my Wilma says she doesn't mind as long as he doesn't wake up the bird in the clock.

Since my wife and I both grew up wealthy and isolated from most of what happens in the real world, getting an actual job at the quarry has been an enlightening experience. I do not have a driver's license, so I could not operate a truck or any of the equipment, which meant I was given the job of waving vehicles to the freshest piles of scree. Fortunately, I was injured almost immediately and put on workman's compensation when I broke my coccyx attempting to slide down a crane. This has allowed me to focus more of my attention on my passion, which is living my life exactly as they did in the historical Flintstones. 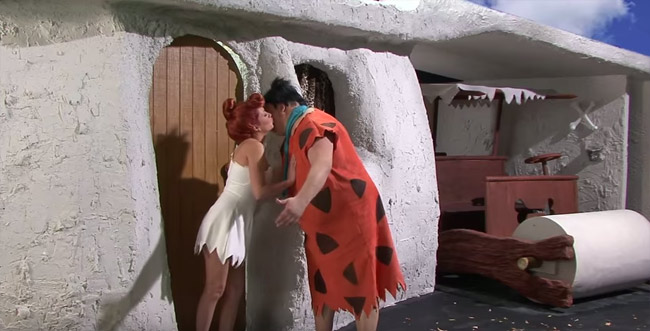 We eat almost exclusively the ribs of blue whales and sperm whales, which is rapidly draining my trust fund, but totally worth it when we convince the waitress at the drive up restaurant to dump a raw rack of whale ribs onto the side of my car. Which, by the way, is a 1984 Toyota Tercel that we have cut the bottom out of to use our feet to propel. It is extremely slow, even when we do the running-in-place windup, but that's okay. The Flintstones lifestyle means a slower pace than the modern world you're used to. It might mean waiting six hours for a bird to flap your clothes dry or it might mean traveling slower than a child can walk. 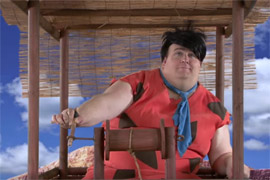 For entertainment, we watch the movies you watch and listen to the music you like, on our animal-based appliances, but we change around the names of all the celebrities to include a reference to rocks. It's fun and clever. For example, Miley Cyrus becomes Miley Cyrock and Tom Hanks might become Rock Hunks. A really fun one is the president, Barack Orockma!

The hardest part about the Flintstones lifestyle is when it clashes with the intolerance and bullies of the world. Like the women from the government who took the baby we adopted from China and named Bam-Bam. They claimed some wild story about a giant trough of animal excrement is no place for a small child. He's going to go back to China and eat rice. We were feeding that kid whale ribs and training him to swing a bludgeon hard enough to shake the foundation of our house. With all the HGH we pumped into him he had biceps like a pro-wrestler. Somehow I doubt a Chinese orphanage has properly Flintstoned their kettlebells out of rocks held by crabs.

People see something different, they see two people happily blocking traffic in their foot-powered vehicle, and they become angry. They feel this mindless urge to enforce conformity. Everyone wants to touch the three giant pearls my wife wears around her neck or asks me why I am five hours late to work even though I left the house as soon as the bird went off.

This is why more people with almost unlimited money don't follow their dreams: They know the world is a cruel place for anyone who doesn't fit the dominant culture. But before the bullies get all high and mighty, I will have them know that at one time, in a real place called Bedrock, the Flintstones made the rules instead of getting jeered at for not following them. One day, we just might make those rules again.

You can find more insight's into the Flintstones lifestyle on Zack's Facebook.