If you're like me, and I know I am, you know there's nothing cooler than pirates. Out of all the famous groups of people in history, the pirates were definitely the best and most interesting. I mean, they buried treasure for God's sake! Why? Who knows! Just to bury it! Maybe they hated treasure! That's how cool pirates were.

Pirates also had really long boats with cannons that they would use to shoot at boats full of rival pirates who wanted to bury their treasure in the same location. Treasure-burying real estate was a hot commodity back then, and fierce battles would erupt over who got to unload a box full of rubies at "Dead Man's Elbow." Sometimes, while blowing up enemy ships, the battling pirates would catch scurvy. This was because pirates spent all their time "hoisting the sails" and "avasting" each other that they barely had any chance to consume citrus fruit, the cure for scurvy. Pirates didn't have any wives either because they were all married to the sea. I don't know if they were married to one sea, like the Baltic Sea, or if they were married to all seas in general. If they were hitched to a single sea, things could get particularly ugly, especially if they found themselves in the Atlantic Ocean for long periods of time. If seas have the ability to get jealous, I bet there were all kinds of marital disputes back then. Luckily, the pirates could solve any problem with their trusty cannons and a bottle of rum. Heck, they probably needed to drink a lot of rum to forget the fact that they were married to a large body of saltwater.

At this point, you are probably wondering why I've been blabbering about pirates for the past half hour. Actually, at this point, over 90% of you have moved on to another webpage. Bah, their loss! Anyway, to get to the point, I made the mistake of visiting SA's forums (which are becoming more and more like a horrible plane crash every day) on Monday and noticed that Lou Ziffer had posted a whole slew of pirate pictures. This made me intensely happy, because seeing a pirate just brightens up any day of mine. I thought things couldn't look any better until I ran across a particular pirate picture, one which changed my entire outlook on both pirates and the gaming industry. Submitted for your approval: 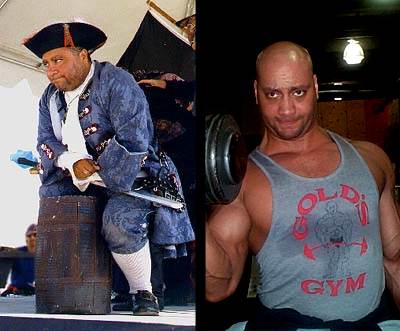 On the left: a pirate. On the right: the Lithtechy Jason Hall. Coincidence? Probably not.

So there you have it, folks. I'm not going to go into the deep and meaningful cosmic implications this association between Jason Hall and pirates may have because I'm tired and I don't really care. I'll leave it up to you, the reader, to draw your own conclusions. Make sure to tell me whatever you come up with. Oh, and Mr. Hall, you can send me a copy of Sanity whenever you like.

It's a very rare occasion when I feel the need to endorse a piece of software for its ingenuity, remarkable programming, and incredible value. However, I was fortunate enough to receive a link to a program called "Hair Pro v5.05" the other day. This wonderful display of coding genius allows you, the average Joe Schlub, to see what you would look like with over 14 different hairstyles (not all at once, mind you)! Yes, it's dubbed as a "virtual makeover" and is as fantastic as one might expect. Unfortunately, it's also pretty crappy. Oh well, it was still a nice waste of time until I find a program I can endorse for its ingenuity, remarkable programming, and incredible value. Anyway, I reviewed it, and the results were astounding. 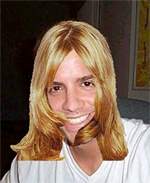