I Possess a White-Hot Hatred for My Neighbors 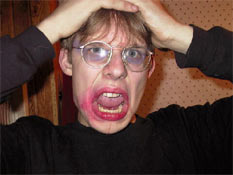 Imagine five of this guy, only even uglier and less intelligent looking, yelling outside your door from roughly 9 PM to 9 AM.I never thought I would find myself with cause to utter the phrase "I wish my neighbors were still those slack jawed hillbilly trash", unfortunately I did and I do. My current neighbors are the most abhorrent wretches imaginable. They are breedhappy fleshsacks with the cumulative intelligence, common sense, and politeness of a fire hydrant that sprays shit instead of water and is perpetually broken. Were I imbued, as I should be, with the cosmic omnipotence of a God, I would be sure that the next time they stand outside my apartment door shrieking at three in the morning some sort of dread menagerie from the abyssal ocean would materialize to haul them screaming back to the black depths. Unfortunately, my wishes of fishes remain unfulfilled and my neighbors retain their status as the howling and humping yokels that disturb any modicum of peace I desire.

It all began about nine months ago, when this woman and her chubby 12 year old son moved in. The kid was always out in the hallway smoking cigarettes and got several complaints from our other non-smoking neighbors until management posted a big sign saying "don't smoke in the halls". The kid started copping an attitude with me, like I had complained on him or something, going so far as flipping me off a couple times as he and one of his mouth-breather chums pulled away in a car. Whatever, I can deal with a little pseudoteen with an attitude, not a big deal, then he keyed the fuck out of my car hood. I can't be positive it was that shitburger but in my bones I know it to be true. I do not enjoy having my car hood keyed up, especially not when I'm a broke ass web master who can't afford to have scratches fixed. I had to put some hideously awful repair putty on all the scratches before they rusted up and, well, that's another stupid story I won't get into right now.

Things become exponentially worse when the fuckle gang moved in across the hall, cramming 5,000 pounds of moron and wailing toddler into a one bedroom apartment. "Luckily" they quickly chummed up with Chubby McFastkey and his loudmouthed abrasive older brother who had just moved in, or gotten out of prison, or hopefully recovered from his government mandated sterilization. I've lived in a few apartments in my day and I always wondered what you would do if you became really friendly with your neighbors. I felt I was friendly with the people who lived above us but our relationship consisted of talking briefly in the hall of our building, never had I considered the novel approach of CAMPING OUT TWENTY FOUR FUCKING SEVEN IN THE HALLWAY SMOKING CIGARETTES AND YELLING INCESSANTLY. 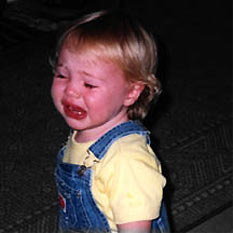 Sure she looks cute now, but it never stops, and her voice is somehow amplified by the long-hanging cigarette smoke into a sort of hideous keening.Really, what a purely wonderful idea, it's like a block party right outside my door no matter what the hour is, and what could be better than a block party you ask? A hostile block party! Frequently the yelling, squealing, and toddler crying taking place immediately outside the door to my apartment became a domestic dispute, complete with angry shouts and threats of violence. We've told them to just shut up probably fifteen times, maybe one incident of which was actually heeded. Counting tonight we have called the police on them twice, as they caper back and forth down the hallway trailing a sled full of burning cigarettes and crying toddler.

After the cops talked to them tonight they came over and very unapologetically explained that "[they] have fucking kids and they're just trying to get by". Get by indeed, with their two-year old daughter clad only in diaper wandering around 40 degree halls completely unsupervised crying to herself and carrying a bowl of cereal around with her. Get by indeed, as they tie water-filled condoms to our doorknob, block up our peep-hole, and stop us en masse on our way out of the building to repeatedly tell us to "stop fucking running [our] mouths off [to the manager]!"

To me this all has a silver lining. No matter how much things escalate, no matter how bitchy the fuckle gang and Sowy O'Hoodkey get, no matter how loud they are, I'll be living with my girlfriend by the end of May and will be far away from their all hours shout festival. My unfortunate roommates on the other hand could potentially still be dealing with this after I'm long gone, which leaves two options for us; get them evicted or get even. Getting them evicted is what we've been trying for the past couple weeks, and while it shows signs of progress the chances of our cars ending up burning piles of wreckage before they get thrown out are a little disconcerting. In the mean time I have put a lot of thought into getting even with them, which also happens to be infinitely more amusing and personally rewarding.

It was like a war room session from the bunker in Berlin, 1945. We sat around the kitchen table and planned out our strategy, various frontal attacks and flanking maneuvers we could make were considered. Eventually we decided on our viable options.

Since they seem to be such massive fans of noisemaking at all hours we thought they might appreciate some good old fashioned air-horn action. Every night for a month we would sneak up to their apartment door at around four AM, once they have finally exhausted themselves with their cacophonic funtimes, and place an air horn on the hall floor, facing their door, with the button duct taped down.

Hey, I can enjoy a good smoke myself, but cigarettes are awfully expensive, way more expensive than say those fireplace starter logs you can buy at a gas station. A large soup pot and one of those burning inside should provide a delicious smoke output roughly equivalent to three entire cartons of cigarettes! They're sure to thank us!

We don't have any toddlers living in our apartment but we can get the next best thing; riding lawnmowers. The hallway is barely wide enough for one, but I figure we could get three of those zero-turning-radius models wedged in the hall and just ride them back and forth for an hour (5 AM to 6 AM) carefully mowing the hall carpeting.

One of the more complicated schemes we devised was to employ a robot we have dubbed "The Hydra". It's basically a motorized vacuum cleaner set to reverse with a boom box hot glued to the top. The suction will be reversed and the dust bin filled with ash so that it just roves the hallway spewing ash and playing an old MC Hammer tape at maximum volume until they come out in the hallway and break it.

The most complicated plan involves establishing a public lounge immediately outside the door to their apartment. We will place several high-backed chairs there and a few demarcating strands of velvet rope from wall to wall. Then we will invite a number of people with tourettes to sit with us and enjoy a bracing glass of cognac and an interesting discussion of current events and FUCKSHITCUNT MEOW MEOW GGGRRRKKK ASS PUSSY SHIT.

If you have any suggestions on how we might get even with these loudmouthed ne'er-do-wells, then please feel free to drop me a line. After all of the run-ins with them we have endured we are more than willing to bend if not break the law to get back at them.