Like most people my age, I'm nineteen years old. What this means is that I am supposed to do all sorts of stuff that other nineteen year olds do. According to society, people who are at this age are supposed to stay out till all hours of the night with unsavory characters doing unsavory things. At my age you're supposed to "Experiment" with things, like you're some sort of college-aged scientist, but instead of testing scientific chemicals and electrodes, you're supposed to test the effects of marijuana and homosexuality. Most importantly though, someone who is nineteen is supposed to celebrate the ancient holiday known as "Spring Break." This is a time when college students from around the globe converge unto a place where the sun shines hot, such as Cancun or the planet Mercury, for the biggest college party of the year! Sexy, semi-naked coeds roam wild on the beaches partying hard, drinking liquor, and consuming illegal substances such as black market weaponry and bootlegged copies of Enrique Iglesias' "Hero." Spring break is one of the most fun times of the year, and involves a copious amount of crazy with a dash of insanity! It's the time people can really let themselves go, which is a nice way of saying that they can get fucked up and have sex with multiple anonymous partners! Neat!

SPRING BREAK! Woo!This is the most magical part of a college student's life. It isn't the type of magic that David Blaine used to freeze himself or that Houdini used to die a horrible, magical death, but rather is magical in the sentimental sense. Old friends become closer, and new friends are made. Many powerful bonds are formed between Spring Breakers, bonds which are stronger than covalent molecular bonds but weaker than James Bond, or for that matter Superman or the Hulk. Still, these guys are all pretty strong, so it is an unfair comparison. You can be sure that the bonds are at least as strong as Aquaman or the Green Lantern. Although I was momentarily sidetracked by the Justice League, you should understand my point. So many memories are forged during Spring Break, or rather they would be if the kids weren't so drunk as to reproduce the effect of that guy in the movie Memento.

Spring break is when college students consume the most alcohol of their entire year. While a normal college student meal consists of pizza topped with pepperoni, a typical spring break meal consists of liquor topped with liquor, or possibly liquor. The philosophy behind this is that the best way to find fun is by stumbling ass-backwards into it, and what better way is there to stumble than drunkenly? Now, I know what you're thinking. Liquor? I hardly know her! Haha, that's a joke! But that clever pun from the 1920s is irrelevant on spring break, as you will most likely end up licking many people you don't know! In addition to such family friendly activities such as beer pong and waking up in a pool of what is hopefully your own vomit, Spring Break is also about something more special: Sex. When you're on Spring Break, chances are you're going to get luckier than Lou Gherig before he died of what's his name's disease. Remember the women's liberation movement? Think of all the progress toward equality that was made by pioneers like Amelia Earheart, who was the first woman to foolishly attempt a flight around the world without the assistance of a penis. Well mister, throw that right the fuck out the window! On spring break, even the most liberated and independent womens revert to their natural state of being dumb whores. Something about the sun and alcohol make girls want sex more then they want shoes. And goddamnit, girls want a lot of shoes. 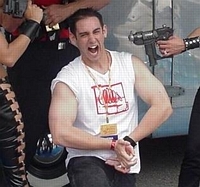 This is me on "Spring Break" last year. I am a total freaking dork and have spent my last three spring breaks at E3 acting like this. Weep for me.All blatant sexism aside, spring break is about fun, wherever and however you can find it. Most of the days are spent at the beach swimming, playing volleyball, and getting melanoma. At night the party moves into the clubs, which unfortunately have less to do with tactical batons and hitting than one would hope. Instead, the clubs are all about dancing, which is great because girls are sexy when they dance. However, I can't dance because of a complete lack of coordination and rhythm due to the fact that I am a jive-ass honkey, so girls in these clubs are out of the reach of me and those like me. For those who are coordinated and like stupid techno raver music, these clubs are a perfect place to break out your photons and show everyone how "Cool" you are, especially with your clear pink Rainbow Brite backpack you fucking fag. For the rest of us, it's best to pretend we're too cool to dance as to avoid horribly embarrassing moments of awkward leg kicking and hand jiving. For the more creepy of us out there, waiting outside of these clubs is a good place to pick up drunk girls. Often literally, as drunk girls tend to pass out a lot.

With all this fun people can easily forget about danger, or as Mystikal calls it, "DANE-JA!" I don't want to be a spoilsport, but there is plenty of "DANE-JA!" everywhere, and you must always be ready. Alcohol poisoning is probably the most common dangerous situation at spring break. It can occur when the alcohol becomes vengeful and jealous over a girl, and it decides the only way it can be happy is with you out of the picture. Drunk driving is another danger, and one should avoid golfing of any kind when intoxicated. Girls should be extra careful of guys in clubs trying to slip something into their drink, such as a novelty ice cube with a fly in it, as these tend to be like, totally gross. As long as you pay attention and keep your wits about you, you should be fine. Meaning about five of you spring breakers will survive each year. 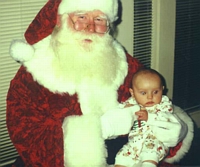 Watch out! It's the crazy fat guy, here to drink you under the table! And who knows what he'll do with that baby?Unfortunately, I have yet to go to a spring break myself, so this has all been based upon my viewing of "Wild On" on the E! Network. And since I don't have a cable package like Lowtax that provides E!, this information is further skewed because I have to watch it through the squiggly lines that the cable company puts in to prevent me from getting their precious channels. As is my understanding though, only attractive people are allowed to go to spring break, and also that crazy fat guy that always has his shirt off. Meaning I can't go since I don't fall into either of these categories...yet. Once I get my plastic surgery, I'll be the best damn crazy fat guy spring break has ever seen!