Prelude to a Date With Holly Body 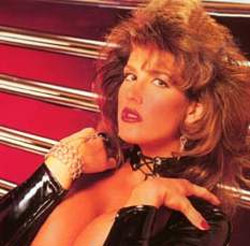 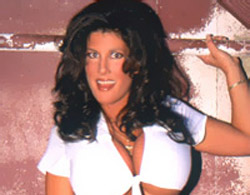 Madam president, the oracles- oh, excuse me.The directors who aren't limited to pointing a camera at two people fucking are way out of their league trying to put CGI dragons and karate fights into a scene with two people fucking. The few who are the slightest bit competent are immense pretentious douchebags who think using a lot of slow motion and new age music somehow imbues their faux lesbian dreamscapes with some sort of deeper meaning. Needless to say right as Holly Body is unsheathing her Hellraiser-like tits the inept director probably has a close-up of where Doctor Greenbaum went in with the scalpel.

Holly Body also usually has some of the most appallingly bad hooker hair you'll see this side of a truck stop. Early in her career it was just the usual giant hair that you hope is a wig so you know the girl won't have to go home and look at it in a mirror. For a huge part of her career she wore some sort of nasty white girl dreadlocks that would have made the Predator jealous. More recently a leonine corona of curly black hair has erupted around her laminated features, perhaps in the vain hope that it might momentarily distract the viewer from what's going on with the rest of her. 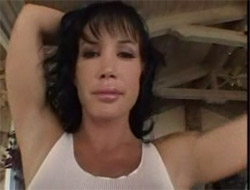 Fresh from kissing burners on the stove.Holly Body never got that memo. In every one of her onscreen appearances she writhes with indignation and constantly complains or, as evidenced by the inept editing in most of her movies, she enjoys it so little she calls a temporary halt to shooting. She grimaces at the sight of a penis and in a girl-girl scene she'll move unwilling towards a vagina as if it's about to overflow with hornets. Maybe that is why Holly has never quite broken into porno stardom. She's a half-forgotten player in the industry who is best known as "that girl who complains during every scene."

She has had maybe five covers in a time when any girl willing to be a "teen drencher" can get her face plastered on the cover for getting her face plastered on the DVD. As age has failed to take its toll on her service pack features she has still been drifting from titles like 1993s "Too Cute for Words" to 2004's "M.I.L.T.F. 9." I wonder if she really is a mom or if she is just playing one in the picture shows. Does she complain for the guy to hurry up and get it over with because she needs to "get Kylie to her spinning class" or does her ageless basalt face give her all the mommy cred she needs?