It was over 6 months since Shirley first left the safe life of a suburban housewife for the exciting allure of the big top circus. After the life-changing experience of first stepping foot inside the smelly tent, she could never go back to the mundane existence of servicing her husband Norman and cleaning his gravy stains off the furniture all day long. She tried to be a good wife, but it was not in her heart anymore, so she set fire to the house while Norman was fast asleep in a scotch-induced coma.

She fled back to the travelling circus, which was by now in Des Moines entertaining the locals with fanciful clowns and death-defying acrobatics. The circus folk had already sensed her return to the fold, setting aside an empty elephant pen for her living quarters. They had her from the first moment she decided to rebel and cut the bonds that held her down, and now there was no escape.

The courtship of Shirley was over, for the ringmaster and fellow circus citizens had made no attempt to curry her favor with friendliness. She was one of them now, and to earn respect she had to show that her heart was in the circus. She had to prove that all that remained of her "civilized" modern 50s lifestyle was destroyed, along with her house and Norman when the angry flames consumed them on that red summer's night.

When Shirley arrived at the circus, they were performing their big finale. The audience screamed delightedly as their eyes burst into hot fluid, and their skin curled back from their scorched skulls. An elephant, delirious with anger, burst through the side of the tent with mangled corpses of trampled children still stuck to the bottom of its massive feet and a wailing clown gored on its giant ivory tusk. The smell of sulfur, clown makeup, and burning flesh permeated the air. It was the smell of suffering. It was the smell of the circus she fell in love with six months ago.

Shirley felt jittery, much like the first time she saw the circus poster that fateful night. The stink and screams gave her a tingling sensation in her naughty area that made her feel ashamed, yet the excitement from these forbidden pleasures could not be denied. Shirley went over to the ringmaster's caboose car, waiting for him. Little did she know that she would never see her hometown ever again.

After the show ended, the ashen crowd shuffled out of the tent and into their cars, secretly swearing never to speak of the things they had just witnessed. The ringmaster spotted Shirley nervously standing near his caboose, and smiled wickedly while picking his teeth with the femur bone of an infant. He strode up to her, sensing her fear and repressed emotions, and with an impossibly thin, long hand, grabbed her generous bosom in a savage movement. She let out a little scream, like a mouse winning the state lottery, but there would be no help for Shirley now. She was in the lair of the Beast, home of the black dragon, the destroyer of dreams, the purveyor of deep fried corn dogs.

The ringmaster picked Shirley up by her beehive hairdo and took her into his caboose, where he made love to her multiple times. This wasn't tired and blustery love like Norman would try to manage during non-football season, but full of fire, passion, and guilt. After it was over, she was thrown from the caboose, and proceeded to wander to the elephant pen where she was staying. The pile of dirty hay offered little warmth, but she was exhausted from the terrible encounter with the ringmaster. Shirley fell fast asleep, her bruised body curled into a fetal position. Tomorrow would be another day, a life starting anew.

She awoke to a gentle hand tenderly stroking her face. There, standing above her, was the most handsome clown Shirley had ever seen. He was plump and jolly, his large mouth filled with colorful candy that poured out in a delicious waterfall as he smiled. He introduced himself as Buttons, the resident professor of the clown college training program located on the circus grounds. Today Shirley would begin her regimen of professional clown training, under the tutelage of Buttons and his minions.

He led her into the dressing trailer, where she took off her orange print dress and donned the honorable costume of the clown: a purple and white baggy body suit with fluffy white buttons. Then came the face white and the plump red nose, made entirely out of mercury and asbestos. Shirley was ready to become what she was born to be.

Buttons was a cruel clown, yet fair. He demanded perfection from his clown staff, letting no error or insubordination go unpunished. Fleeing from the circus tent whenever something went horribly awry was particularly interolable. Whenever this happened, the clowns were forced to draw lots, and every one in ten was thrown to the baby elephants to be beaten to death by their tiny trunks. Rumor had it that Buttons even served as a guard at the German concentration camps, and that a military tribunal was searching for him, but this wild claim has so far been unsubstantiated. 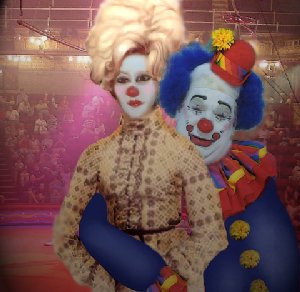 Shirley was head over heels in love with Buttons, for he was bold and handsome. She followed his every direction with rapt attention, learning how to dance around, shoot seltzer water, and drive the clown car. Buttons thought she was a natural, and was very pleased with her quick learning ability.

Unknown to Shirley, Buttons was beginning to fall in love with her as well. One day, as he helped her out of the clown car, their fuzzy buttons brushed together. It was a perfect moment of clown lust that they both understood. Buttons took hold of Shirley and rubbed his plump red asbestos nose against hers, causing sparks to shoot out in his unquenchable passion. They went to Shirley's spot of hay, where Buttons smothered her with his pudgy body, bilging his demented seed into her with a grunt of dismay until collapsing unconscious into a pile of elephant dung nearby.

Unbeknownst to both Buttons and Shirley, however, there had been a third party spying on their activities ever since they first met. Her name was Koko and she had been smitten with Buttons for years, although he had never felt the same for her. Now that this saucy bint had come in to take her clown away, she was furious with white hot anger. If she couldn’t have Buttons, by God, nobody could. Shirley was as good as dead.

Check out next Thursday for the dramatic conclusion of Shirley’s Big Top Adventure. If you don’t I’m going to use Google maps to find out where you live and save it to a folder on my desktop called “Places to bomb when I become dictator of Euro-USA”.

Today I am handing out candy. I'm still trying to figure out how to get candy through the Internet so please be patient. You should get your candy in 6-8 weeks, depending on the tropical storm season.