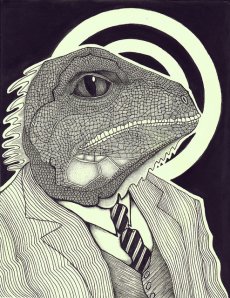 As janitor at a counseling office, one of my jobs is to clean the secret staff entrance. The entrance, a 50-foot hallway, runs between the office and the alternate dimension where psychologists live. Its door is disguised as a shelf of DSM manuals that no one including their author has ever read. I sweep the hallway of debris, mostly shed scales and crumpled pages from therapy notes. Scribbled on the pages are math equations calculating how much warmer and softer the patients' suffering will make the psychologists' beds that night.

Like the rest of the office, the hallway is filled with small plastic cylinders that make a soft hum. Most people think they're white-noise machines to mask therapy conversations, but actually they're miniature heating/cooling units that keep the office at exactly 68° F, the only temperature at which psychologists' ectothermic bodies can survive. I'm so used to the cylinders' humming that it's become part of my internal biorhythm. Once when they turned off I actually died. My soul floated down the hall into the office lounge, where two psychologists were talking over wine fermented from the blood of suicide victims:

"Does it ever bother you that our patients are in indescribable psychic pain?"

"I wouldn't say it's indescribable, although you'd think so from their inept blubbering about it. One man told me his life is a desolate void of misery, which in addition to being redundant makes no sense. A void by definition can't contain anything."

"I guess you're right. So did you finish that book I lent you?"

"No. I was going to read it this morning, since my first patient is usually too depressed to talk anyway, but today she was feeling chatty for some reason. I would've tried to make her depressed again, but I have no idea how depression or any aspect of the human mind works."

I floated near one of the psychologists and got sucked into his body - psychologists' bodies are so devoid of soul that any nearby spirit gets pulled in like light into a black hole. There was an intense pain as my soul spaghettified on the event horizon of his parietal eye, accompanied by a series of bizarre thoughts: robots hanging from gallows, children burning to death in acid rain, scorpions with erect penises for tails.... Luckily, once inside the psychologist's body I found I could control it, so I ran down the hall and gave my corpse CPR. As soon as I was revived, the psychologist lost his lunch - mostly crickets, cow offal and some sort of giant centipede - all over me, both from briefly having a soul and touching a human being. He was so traumatized that he had to perform self-therapy by describing the ordeal to a video camera, then pretending to watch the video while drawing pictures of yachts on a notepad. 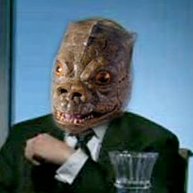 The other hallway I sweep is the one patients walk down to their therapists' offices. It's beautifully decorated with Persian rugs and feng shui to counterpoint the patients' misery. At the end of the hall, after some gorgeous Greek statuary, there's a small patient bathroom I have to clean. This is my favorite part of the job, because if you lick the toilet you get really high - there's enough drugs in the patients' urine to tranquilize a T-rex. Sometimes I get so high that I try try to have sex with the office plethysmograph. (I've gotten stern lectures about this, since the plethysmograph is a vital piece of equipment - it's used in a game where the staff read aloud from patients' despair-filled journals and see who can get the biggest erection.) Sometimes I get so high that I hallucinate that the psychologists are human beings and the constant flick of their tongues is an expression of empathy.

Tranquilizers, of course, give you severe dry mouth, so I spend a lot of time by the water cooler in the waiting room. The cooler's water is actually the toilet water from the patient bathroom; they just filter out all the drugs to recycle into new drugs. The water still has a strong medicinal taste - a rich Paxil flourish with grace notes of Aviatan, Zyprexa and Relaxadone - which is why most of the patients are addicted to it. Once when I was taking too long to fill my cup a patient attacked me. Fortunately, I was able to subdue him by describing what happiness and intimacy feel like until he started crying. His tears had remarkable pressure - decades of crying had hypertrophied his tear ducts into fire hoses - and arced across the room and hit the TV on the wall, making it short out and show another channel that patients aren't supposed to see: the one on which their sessions are broadcast in the psychologists' dimension as primetime comedy.

Psychologist: Did you try that new therapy I prescribed?

Patient: You mean spending eight hours a day in a g-force simulator?

Psychologist: It's not crying if the tears can't leave your body.

I got fired for the incident, since making a patient cry is technically impersonating a therapist. I've been fired hundreds of times, but I always just reapply the next day with a different name. The one benefit of working for psychologists is that they can't distinguish human faces.