I meet up with Jason Fumes at the What-U-Eat in Spider Lake, Wisconsin. He's in the produce section fumbling with fruit and wires. "I'm hooking these electrodes up to the lemons," he explains. "There was a sighting here a month ago and we'd love to get some readings." A cashier had seen a woman stuffing lemons into her purse and cursing at the other customers. It sounds like a real retail nightmare.

"I work in a yard that has lumber in it during the day," Jason says, "but after work I do my real job." His real job is this: tracking down evidence of retail nightmares with the help of his best friend Graham Winker. Graham is carefully inspecting a dozen apples. "My wife says if I'm going to hang out in a grocery store with Jay all afternoon I might as well get the shopping done for her." 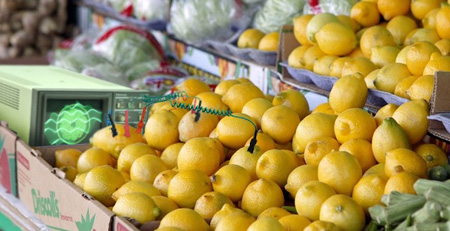 "Spider Lake has a population under a thousand," store manager Beg Rimple explains to me. "Hell, would you want to live in a town called Spider Lake? I've got a business to run, and that means I need customers. I figure if the Retail Nightmare Investigation Squad finds something, they'll put me on the map. These retail horror stories are hot right now. I've got a whole new rack of iPhone 3G cases right near the register. Bloggers are sure to show up once the news breaks, and bloggers need iPhone cases. Right?"

Several hours later, Jason reviews the lemon readings and analyzes them loudly: "Check out that spike in the electro-lemon graph! See, that's where Graham picked one up, so these results are inconclusive. One of the hardest parts of our investigations is getting inconclusive results. It's very difficult to prove you have a genuine retail nightmare." Graham is not available for comment; he's on the phone bragging to his wife about the 20 cents he saved by buying lemons with holes poked in them.

While Jason unpacks the rest of the Retail Nightmare Investigation Squad equipment, Graham describes some of the heavy gear he's hefting. "That big crate Jay is trying to pick up right now, that's the thermal imaging something. It's a camera, but the colors look like the movie Predator. I don't remember what it's supposed to do. None of the results are ever conclusive anyway. All that stuff is really expensive, I don't like handling it. Plus, I'm carrying all these lemons. You almost done, Jay?"

Jason has finally finished unloading all the equipment, just minutes before the What-U-Eat closes for the night. The manager locks the door behind him on his way out, and our observation continues. Jason and I are in a small tent; Graham has gone home with the van. "The great thing about being here all night is we can see right away if anything happens," Jason whispers. "It would be better if we had access to all my equipment, though. I wish Mr. Rimple would have told us he was locking us out before we set everything up inside." The evening is long and cold and quiet. 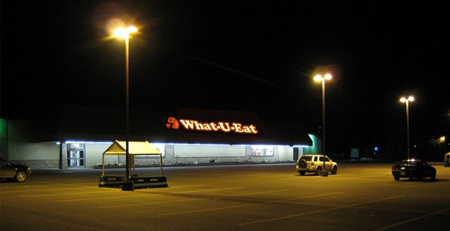 "I'm giving this location our strongest rating yet: inconclusive," Jason tells me the next morning. "Retail nightmares don't leave physical evidence. You could have one right under your nose and you wouldn't even know it."

Graham is at the courtesy desk educating the woman behind the counter on why her produce-return policy is bullshit. His rant triggers the thermal imaging something, which starts to blink and glow. "Whoops, almost forgot to pack this up," Jason says as he switches off the monitor.

"We're leaving, Jay," hisses Graham. "These yokels won't take back these mushy lemons. They grifted me! I want to get home and write a Yelp review while this is still fresh in my mind."

Beg Rimple runs up to apologize, but he's stopped in his tracks when Graham knocks over the rack of iPhone cases. Graham peels off in the van, leaving Jason and I behind with the heavy equipment.

"It's a shame we've already declared this place inconclusive," Jason muses to a blubbering Mr. Rimple, while turning an iPhone case over in his hand. "You might have been onto something here."

Thanks to Ian "BFM" Helm for the photoillustrations, or maybe unaltered photos. It's inconclusive.