Ground Rules for Our Rugrats LARP 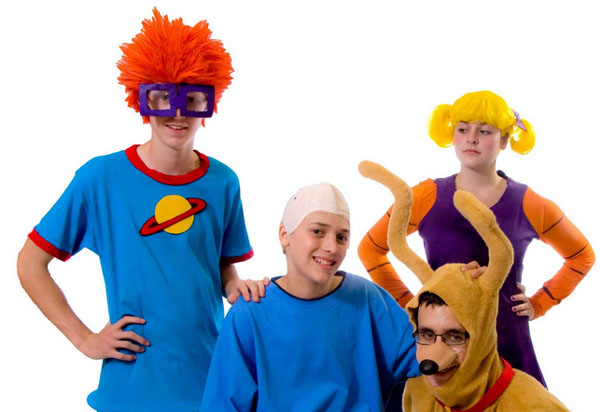 Guys, I don't need to tell you Bakacon 2013 is going to be a pretty big deal for us. It's taken a good five years to win over those scheduling bigwigs, but I'm happy to say that from between 2:00 to 2:45 P.M. this Sunday, Sunset Room A is ours. Look at it right there on the program: "Rug-rats LARP." Personally, I wouldn't have stuck an inappropriate hyphen in there, but the important thing is we'll be visible for up to thirty minutes -- yes, I'm providing ample time for bathroom breaks and general standing fatigue -- and with an audience deeply invested in seeing how their favorite Eastern European cartoon characters can be adapted into the versatile world of live-action role-playing. Also, convention staffers made sure to inform me that at least one "enforcer" will be standing by in case people start throwing bottles and wet garbage at us again. This person won't have the authority to actually stop any disruptions, but I think you'll all agree we can always use another warm body in the room.

First off, let's lay down some ground rules: in spite of recent controversy, official Rugrats canon only stretches to exactly before the introduction of Susie Carmichael in episode 75. Some of you said my refusal to acknowledge Chuckie's adopted Japanese sister smacked of racism, so I've decided to roll things back to pre-The Rugrats Movie continuity. Just a core gang of characters, all hovering around the same socioeconomic level -- as the original creators intended. If we start throwing in additions like Dil, we're only steps away from regarding All Grown Up as anything but a parallel universe created by Didi as she dies of complications during childbirth in 1990. That's what we agreed upon, and that's how it's going to stay.

As we worked out in our planning stages, this campaign will take our favorite group of adventurous babies back to medieval times, where they'll encounter any number of dangerous beasts torn straight from the pages of J.R.R. Tolkien. I do want to remind everyone that, yes, character death is possible during this campaign, so please remember to perfect the scream of a toddler realizing his or her short life is in the process of being snuffed out (I've dubbed this sound effect "Baby Clapton"). Remember to study the tapes I sent to all of you -- I didn't get three police visits from making them just to have another Phil or Lil die unceremoniously in front of a yawning crowd that can't even be pacified by the throwing of wet trash.

Since many of you misunderstood the battle system at play during our last campaign, "Showdown at Diaper Gulch," I've decided to refine the rules for the sake of simplicity. For instance, all characters lose their active and passive resistances except Tommy, who gains attack initiative, a defense bonus of +5, lockpicking skills, fluency in Human and Baby, and recurring, prolonged bouts of invincibility. Because I will be taking on the role of Tommy, I've decided to address concerns of unfairness by giving this character a unique weakness: heartbreak. None of our foes can inflict this status effect at the moment, but you can bet this susceptibility will be much more relevant when our group is finally allowed a public Rugrats LARP with romantic elements. Just so you know, I had to look a bunch of people in the eyes over Skype and promise this wouldn't happen at Bakacon.

Let me also not forget to point out that the diapers we'll be wearing are only for costuming reasons, and they are not to be used for their intended purpose. Rugrats LARPing started as a cover for diaper fetishists, so you'll have to understand why I may ask to weigh yours both before and after the campaign. Remember, Rugrats observed the "tell, don't show" rule during its 13-year run, and even though most of the characters were clearly soaked with urine or feces whenever they appeared onscreen, these substances were rarely shown in detail to the viewer. It's also important to announce your diaper status during every turn, but just remember that defecation carries a costly encumbrance and movement penalty, both in the LARP world and our own.

After three solid years of getting shafted by that Ben 10 panel, we've finally made it, and I couldn't be happier. This is our time to shine, boys, and we'll make sure that second Rugrats LARPing group in Lubbock, Texas remains second overall as long as we're around. And just a reminder: the Invader Zim group comes in at 3:00 P.M., so let's make sure we pack up the inflatable Reptar at least five minutes before then. I don't even want to make eye contact with those fucking freaks.