At a baseball game:

*Squints with a very serious expression on his face as weird wavy lines radiate from his eyes in beams.* "Yup. Thought so. The woman sitting directly in front of us has dandruff. Hey, turn around lady! Mind your own business." 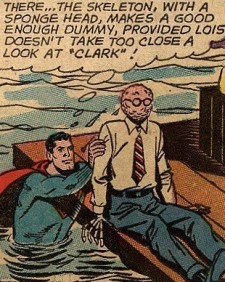 "Why don't these guys just hit the ball out of the park every time? It's only a few hundred feet. They're getting paid millions of dollars. I don't think it's too much to ask. You might want to plug your ears. I'm going to amplify my voice to boo everyone at the plate for the next three hours."

"Hey bud. You're a great friend. Mind paying for my chili dogs? I keep forgetting there's no room for cash in these tights."

*Thrashes his head back and forth, eyes wild, as he writhes on the ground with snakes coiled around his arms and legs, his torso engulfed in flames.*

"Excuse me, ms. tour guide? I have a question. Don't you think it makes sense for us to build a fence around the country so we can let the good ones in and keep the bad ones out? Well, you might think that has nothing to do with giraffes. You'll be singing a different tune when some of the bad ones sneak into that giraffe pen and you have to start feeding them out of your own pocket."

"Wow. This frozen food cooler reminds me of my Fortress Of Solitude. It, too, is largely comprised of Hungry Man frozen dinner boxes."

"It's rather funny that they call this place a 'supermarket'. Doesn't that word remind you of anyone? Someone you know? A handsome, remarkably powerful guy? Wears a cape? I wonder how Marketman is doing these days."

"I don't know why they go to the trouble of putting seats in every shopping cart only to make the leg holes so darn small. This is one heck of a tight fit. I haven't been this uncomfortable since those cute girls in aisle 2 pointed out my pit stains."

"They got any books with pictures of cars or butts in here? Like a car magazine cover, but repeated for thousands of pages in the ultimate tome of ancient knowledge? Or is that sort of book only found in the high end libraries for important people?"

"No, I'm not taking it off. Why would I? It's three fedoras stacked on top of one another. That's simultaneously ironic AND classy. Who cares about the people behind me? They can move."

"EXCUSE ME, EVERYONE! Be advised that I have an allergy to popcorn. Please roll up the tops of your popcorn bags to seal them closed. Only open them to take a bite if you absolutely have to."

At a fancy restaurant:

*Thrashes his head back and forth, eyes wild, as he writhes on the ground with napkins coiled around his arms and legs, his torso engulfed in flames.*