A blonde-haired woman dashes through the jungle. She is naked, her form and identity obscured by her quick movement. Her stop is too sudden for the camera, which continues forward before pivoting back around and zooming in on her face. 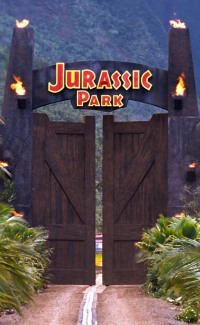 It's Dr. Ellie Degler (Laura Dern). Or is it? Her eyes are wild, darting in all directions.

A strange, almost bird-like sound pans across the surround sound. It's close. Degler's eyes narrow. In the clearing before her stands... a chicken tied to a stake in the ground. It pauses, cocking its head. From its left comes a blur of movement. Breaking through the brush is Dr. Sarah Harding (Julianne Moore). The chicken turns to run to its right but there is a grinning Amanda Kirby (Tea Leoni). From the glimpses we get, it appears that the newcomers are naked as well. No one speaks a word.

Cut to a shot of violently shaking foliage accompanied by frenzied squawks and wet tearing sounds. A shower of blood splatters across the oversized fronds.

The aftermath of the previous scene is displayed on a familiar bank of monitors. "Clever girl," says a mysterious voice. We turn and see the speaker, a velociraptor. The Jurassic Park security room is packed with dinosaurs of all kinds as they oversee the computers. On one display we see a naked Dr. Alan Grant (Sam Neill) and Nick Van Owen (Vince Vaughn) on opposite ends of a Panama hat, growling fiercely as they each clench one end between bared teeth.

"You've cloned them all! Only they aren't the real thing. Not by a long shot. They can't even talk. They're just copies of copies. So you keep them in these pens and... what? What's the endgame?"

His interrogator, the velociraptor from the previous scene, punches Malcolm square in the jaw.

"I ask the questions. Why you here?"

Cut to one of the security consoles. We see Dennis Nedry's virus taking over. The power shuts off. 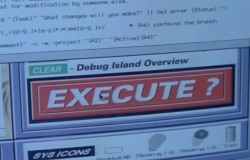 "What have you done?" asks the panicked interrogator.

A playful smile creeps across Malcolm's battered face. "Merely an, ah, demonstration. Chaos theory in action. I suggest you hold on to your ass."

Epic music swirls. With each beat, we see fragment of a different scene. Clones testing the powered-down fences. An exploding Jurassic Park jeep. A full-scale battle between the dinosaurs and the revolting human clones.

Cut to Malcolm coming across the old promenade. He steps inside and discovers a row of human outfits encased in resin. Each item of clothing belongs to someone from the first three movies. This is where the DNA for the clones came from. Malcolm picks up an axe and swings it. Smash cut to him setting a cloning machine to INFINITE and turning it on.

Now we see the last of the human clones surrounded by security dinosaurs. They gave it their all, but were simply outnumbered. A puddle at the feet of one of the dinosaurs shakes. Silence as we switch back and forth between slowly zooming shots of the puddle and the dinosaur's face.

Figures start to appear in the treeline surrounding the scene. Lightning flashes. We see hundreds of clones of every major character. This is what Malcolm was up to.

On a black background, the following appears in white text:

Quick cut accompanied by a loud electronic *BWOM* sound: The newcomers battle with the dinosaurs.

Quick cut and *BWOM*: A human clone and a dinosaur both see a gun on the ground, both run and dive for it at the same time in slow motion.

Quick cut and *BWOM*: A T-Rex bursts through a life-sized sculpture of T-Rex, lowers head into the swarm of clones and eats several in one bite.

*BWOM* We see the T-Rex, from behind. It's greedily chewing. There's a blur of movement as something hits it on the back of the head. The dinosaur turns with a roar, and comes face to face with an enormous John Hammond. His roar is even more primal, and his straining face gets uncomfortably close to the camera.