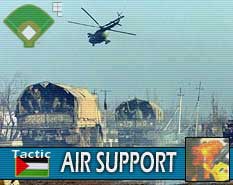 In this preseason shot from the MELO, you can see an attack helicopter escorting ground troops in the "I" formation with a heavy weapons expert who pitches left but then plants right.

ANNOUNCER RICH "LOWTAX" KYANKA: "As the sun rises and the dry desert winds blow in, April, also known to the Israelis as the 'Month of Flowers,' marks the revival of life from the barren sands of the Earth. The melting snow and blossoming fruit trees bring out the native beauty that defines this holy paradise, a birthplace to a variety of colorful and fascinating religions which all believe in killing each other. This time of the year truly defines the term 'rebirth' in nature's grand cycle of life and signals the harvest of budding green almonds, apricots, and plums. What's a better time of the year to kick off the SA Middle East League Opener, the fierce ongoing rivalry between the mighty Israeli Jewensteins and the crowd favorite Palestinian Arabmatics?"

COLOR COMMENTATOR JIM BAGLEADUCIA: "That's right Rich, we're bracing ourselves for what looks to be the most exciting year in the history of the Middle East League Opener since its creation in the early 1950's. The intense competition between the Jewensteins and Arabmatics seems to have reached an apex this season, with Israel's remarkable preseason offensive buildup and the acquisition of a number of free agents and rookies from farm teams across the nation. While most analysts concur that Israel still maintains its long-standing reputation as the league powerhouse, Palestine has been quietly creeping up the power charts by employing their trademark 'hit and run' tactics that have made them the fan favorite amongst nations who have outlawed Scotch tape and deemed it an 'offense against God'. In fact, our computer has given them a rating of '63.21a,' as opposed to their rating last year of '2912.8372ccc.' However, since these figures are all arbitrary and none of us know what they mean, you really can't read too much into those ratings in general." 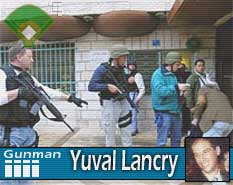 KYANKA: "Offense indeed, Jim. That's what has fans of the Jewensteins so upbeat this year, hoping that their team will bring home the pennant in addition to the severed heads of various Palestinian police force officials. The Israelis have decided to go with what works, putting their money and resources into airpower and conventional land forces instead of building more power plants and Tiberium harvesters. They've upgraded a major portion of their artillery and airborn weapons, giving them a decisive edge over the ground-based attacks that define the Palestinian starting team. However, all the airstrikes in the league won't be able to defeat a team that's entrenched in the landscape and is being coached by Yassar "TNT" Arafat, the man who single-handedly defined the strategy of 'strapping exploding shit to yourself and then blowing up in a major metropolitan area.' Although opposing Israeli citizens and teammates are appalled by the ruthlessness of this highly offensive technique, they have to admit it's been stunningly effective in recent strikes. Over 438 Jewenstein players have been placed on the injured and 'explosively disabled' list and even more are expected to have their limbs separated from their body via detonating Palestinians. Let's go to Token Female Corespondent Sarah Jacobson, reporting from the sidelines near the West Bank. Sarah?"

TOKEN FEMALE CORESPONDENT SARAH JACOBSON: "Thank you Rich. As you can tell by the large amounts of sand behind me, this area contains a whole lot of sand. There are sand hills, sand valleys, and just really sand everywhere. It's like a big sandbox, only bigger. This makes walking around really hard because your feet like totally sink in. Into the sand. Officials have met to discuss laying a thick coat of Astroturf along the playing field, but league commissioners have decided that this material is too dangerous and could cause an unprecedented amount of injuries. I suggested they do something like glue sand to paper like I did when I was a kid in grade school, but I guess they didn't want to do that because I've been kicking the sand around here all day and I haven't found any paper underneath. I found a rock and some animal that looked like a big scary dog, but that's it. Back to you, Rich." 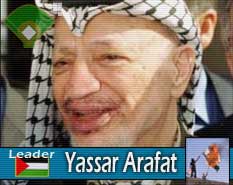 Yassar "TNT" Arafat poses for his collective trading card picture. In mint condition, it's worth 500,000 rupees.

KYANKA: "Thank you for that very enlightening report, Sarah. You sure are earning the 1.2 million dollars a year that the network president is paying to prevent you from releasing the video tapes of him engaging in extramarital intercourse with a golf cart. Now while everybody knows that the Jewensteins are playing hard as a team, most people aren't aware of the breakout performance that one rookie has been having this year. Avirama Loya might not have the celebrity status and name recognition as teammate Rotem Golan, but he's easily on his way to set team records for children killed, drywall structures shot up with machinegun fire, and most pictures featured on CNN.com holding a submachinegun. John Madden is in the Israeli locker room with Loya, preparing for their upcoming game against a few Palestinian janitors who vaguely look like they could potentially be terrorists or merely janitors disguised as terrorists. I've been told that they've just been given their pep talk by leader Ariel 'He Hate Me' Sharon, and are preparing to head out. John?"

JOHN MADDEN: "RAARGH! After years of mindless commentary, I have grown fat and bald and insane! Buy my paint! Avirama, how do you feel about the way the Jewenstein team is shaping up for this year?"

AVIRAMA LOYA: "Well John, I think we're the strongest we've been in years, maybe in all history. We've got a great team of guys up on the front line, a bunch of guys with a lot of heart and experience. I've been fortunate enough to learn how to shoot up churches and abandoned buildings with the best veterans on the team here, and I feel that if confronted by a group of angry teenagers armed with bottles and rocks, I could easily shoot them, maybe even in the face, with exploding bullets. The whole thing is that this is a team effort, and there's no 'I' in team. You've got to go out and give it 120 percent and just keep your mind on the ultimate goal which is to kill people for our Lord and because we want to build Holy Condominiums on the Arabmatic's land. We also want to (EDITED OUT BY MEDIA CONSPIRACY). Wait, you guys in the Jewish media conspiracy can edit that last part out, right?"

MADDEN: "I've been eating only chalk and peaches for nine months! Buy my paint!!! You gotta hate it when the quarterback gets up looking through his earhole! BUY MY PAINT!!!"

KYANKA: "Thank you for that interview, John. I can't help but notice that you're fat, bald, and completely insane. I hope that works out for you."

COMMENTATOR DENNIS MILLER: "Now allow me to pose the following query-" (his head explodes from a sniper shot hundreds of yards away) 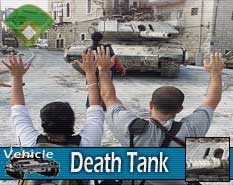 Citizens of Palestine worship the infamous Death Tank of Israel, which defends its turf against enemy children and schoolteachers.

CHRIS BERMAN: "Howza hoo and boola boo to ya, Jim! We've got the up and up with the lowdown on the Sultan of Blow-Up'n, the ginger snappin Hussein Ramkumar who's leaping and jumping over the bam boom slammers on the slick ride. Hussein, what's the plan?"

HUSSEIN RAMKUMAR: "Greeting. I am of strapped with the bombs to body and destroying the enemy bingo halls and Jew babies. All Jew babies grow up to become evil Jew bankers who are against us god. We are owning land and oil, the Jews own lies. We combat lies with bombs and destroy pizza parlors of evil lies. We explode with people so Jews learn that our God is right and theirs is wrong. Our god says when we blow up with people and explode a amusement park or enemy zoo, we will go to the afterlife full of virgins and the hats which are able to contain two beer cans above that emit straws to drink from wearing the hat on one's head. We will control this world and your all Zionist governments will fall to our people with bombs on their man boobs! Allah rules, Jesus drools! Go Palestine!"

BAGLEADUCIA: "Chris, we've recently heard reports that the Palestinian government has upgraded their weapons inventory to include both glass bottles that break when thrown AND some sort of exploding device shaped like an outdated abortion clinic tool. Have you seen any of these so-called 'superweapons' in action?"

KYANKA: "Thank you very much, Chris. We hope your Paxil starts taking effect soon. Well that's it for today's preview of the Middle East League Opener, as we're only minutes away from a scheduled conflict between some guys in the sand and some guys behind a wall. We're predicting heavy gunfire with a chance of mortar explosions, but these conditions hopefully won't ruin what will undoubtedly be one of the most exciting matchups since the last time these teams matched up, approximately 12 minutes ago. Stay tuned for the upcoming exciting coverage of the Middle East League Opener!"