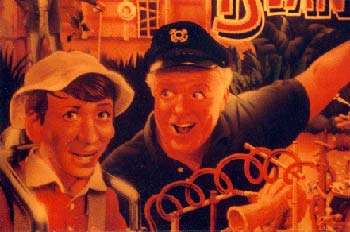 Artist depiction of Heber Jentzsch and L. Ron Hubbard foiling a dastardly outer space caper for the good of all mankind!Most of you are undoubtedly aware that in the past, Something Awful has taken the occasional sporty and spirited "poke" at the fine folks of the Church of Scientology. What can we say? We're a bunch of jolly fun pranksters and we know that the crew manning the Amphibious Crystalline Scientology Zeppelin Headquarters loves a good joke. And how can they not? These are the same whimsical lads who have made a business out of brainwashing gullible folks into thinking that Scientology is the one true religion. Of course that's just the cat's meow. The roar and bite comes when they attach hoses to your body and sap the life out of you like you were some kind of giant walking squeeze bottle of ranch dressing. They do the same to your bank account, too. Then after all that, they go to your fridge and steal your ranch dressing. These people love ranch dressing. It all works out in the end when you realize they use their dirty money and ranch dressing to build moon rockets and vast armies of clones. But don't worry! They do this for the benevolent purpose of keeping Earth safe from the planet devouring Galactus and his slave, the Silver Surfer. We only joke about them to keep them happy, which is quite a chore given all the tireless, thankless work they do on our behalf. It's the least we can do to give back to our good friends!

Okay, so I'm a liar. We, like all other sane and rational people, think Knight Rider was a totally awesome show. Knight Rider and all its awesomeness aside, we also think Scientology is a really big scam. For one thing, Scientology has no talking car or dangerous crime fighting adventures. What's up with that? They don't even have David Hasselhoff. At best, all they can muster is Frank Stallone and a bunch of has-been actors like Tom Cruise and John Travolta. They're also about as good at hiding their evil as Adolf Hitler wearing a Darth Vader costume while murdering a handicapped orphan dressed as Abraham Lincoln. A good example of the Church of Scientology failing to hide their devilishly diabolical nature is in a radio interview conducted with Scientology Kingpin Heber Jentzsch. Mr. Jentzsch, in addition to being the president of Scientology, is also clearly criminally insane. He's the kind of guy who would steal a seafood dinner from you and then lie to your face about not having sex with it. 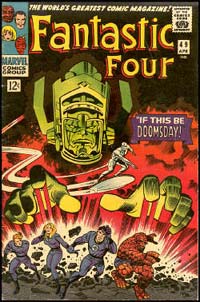 Only Scientology can protect you from Galactus and his planet destroying powers!In this interview, conducted sometime in the early nineties, Heber Jentzsch is asked about what exorcism means within the Scientology faith. This question instantly sends him into a promotional spiel in which he will not be denied! Despite the fact that the host, a call-in listener, and another guest are asking him to either answer the question or shut his clamhole, he still keeps rambling on like a perpetual moron machine. Eventually the host cuts his microphone so that the other guest, a former Scientologist, can explain what it means. And then the real fun begins! As the other guest begins to explain the question, Heber walks over to him so he can yell into his microphone. He then starts screaming for everybody to keep their hands off him, and threatens the female host with what we can only assume would be a hearty bitch slap. Of course he didn't actually hit her, because that would be rude. Instead, he makes a move so desperate that it makes space nerd Wil Wheaton's acting career look amazing. Heber accuses the other guest of condoning drug use, and then ultimately of being on drugs. In the midst of all the madness we learn that Prozac is a "KILLER!"

The interview then drifts from drugs to some of Heber's overseas criminal charges. Of course that logically leads to Heber's mother and more sweet, sweet insanity. Heber, being a sensitive family man, naturally becomes enraged with the host accuses of him of lying about his mother's health. This leads to the single greatest cry of "YOU!" ever uttered. With the spirit of a reluctant action hero coming face to face with the evil criminal mastermind who crossed the line and made it personal and with the pure insanity of a cunning jewel thief who committed crimes disguised as bigfoot being confronted by the group of teenage sleuths who brought him to justice, Heber delivers the most impassioned "YOU!" in the history of humankind. It is angry, shocked, deranged, and vengeful. It is everything in one word. It's simply beautiful. After that, chaos reigns supreme as Heber demonstrates how to properly promote your business/church in the bizarro world.

All of this begs the question: where the hell did Heber Jentzsch learn business? I think the answer is pretty obvious. He went to the same business school for psychotic maniacs that WWF and XFL founder Vince McMahon went to. The roaring incoherent insults, the thinly veiled threats of violence, the child-like pouting, the loud and furious yelling, it's all there! I don't know if Heber has anywhere near the facial talents as Vince, but they're both pretty damn insane when it comes to conducting themselves in a professional manner. The only difference is that Vince McMahon's threats of injecting us with the poison of the N.W.O. are nowhere near as serious or dangerous as the Scientology Happiness Crew's threats of helping us reach "spiritual enlightenment," which loosely translates into being a brainwashed walking public relations machine and bad party guest.

But don't take my word for it when you can listen to the insanity yourself! Download the KFI radio interview:

Part Two (586KB) – Act now and get the bonus second part, with timeless tunes like "YOU!!" and "How do you feel about people?"

Big thanks to Something Awful Forum Goon and obscure audio curator SydBarrett for the interview.