A Very Special Something Awful

It has been a great season here on Something Awful, and since everyone else does it, I figured it was high time we have a retrospective! Everyone loves a good old fashioned "remember when...?" episode. For you avid SA readers, this won't be a complete rehash; I will include a lot of behind the scenes tidbits that might shock and amaze you! 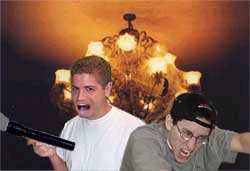 Lowtax and Fragmaster are in for a little more than they bargained for!Let's turn the clock back eleven months, to that fateful day in the summer of 2000. Episode 203 begins when Rich "Lowtax" Kyanka is notified that he has inherited a million dollars from his mysterious uncle who lived in the equally mysterious city of Gary, Indiana. There is a clause in this shadowy uncle's will that states, "Lowtax and a friend must stay the night in my house on Scare Street if he is to receive the million."

Lowtax, not having any friends, offers a hostile acquaintance by the name of Kevin "Fragmaster" Bowen a share in the money if he will travel with him to the haunted state of Indiana and spend the night with him in his uncle's house. Fragmaster, thinking it is a homosexual come-on, readily accepts the offer. To make a long story short, Lowtax and Fragmaster manage to survive the night, after a few frights caused by a stray cat and a hilarious concoction of paranoia and tequila. Unfortunately, all of the money promised them turns out to be a million acorns, because acorns are valuable to crazy uncles. Don't blame me, I didn't write that episode.

WHAT YOU DIDN'T KNOW: While filming this episode Jeremiah Flinthoff, the actor who portrays Lowtax, actually shat himself on set because of a rare jungle virus.

This episode has become a fan favorite (with good reason), Lowtax and the gang really crammed the laughs into this one. Lowtax is at Green Valley High School on his way to remedial Algebra when he spots a poster for a "Battle of the Bands" sponsored by a local radio station. He grabs the poster off the wall and shows it to his best friend Fragmaster, who is also in remedial Algebra. Always the schemer, Lowtax decides it is time to form a band. Naturally, he will be the keyboardist and vocalist and Fragmaster played drums in 6th grade band, but who could they get to really jam on the guitar?

Lowtax's question is answered when he returns home from school to find his family's sassy live-in butler Zack "GeistEditor" Parsons cranking out the tunes on a vintage axe. By "axe" I mean "guitar." Lowtax invites him to join the band, and after some touch-and-go rehearsals, they decide to name the group "DIE MARTIN DIE" and work out what they think will be a great rendition of "We Came to Rock". When they show up at the Battle of the Bands, there is trouble - high school bully and football star Lance Felwick and his band "The Networks" are there. Undaunted, Lowtax and crew belt out a contest-winning version of "We Came to Rock", despite some hilarious technical difficulties caused by Felwick's attempts to cheat. In the end they are each given a t-shirt from the radio station that sponsored the contest along with the respect of all who witnessed DIE MARTIN DIE's incredible perseverance.

WHAT YOU DIDN'T KNOW: Lance Felwick was played by veteran character actor Sam Jain. After the final day of filming a make-up artist caught Jain trying to violate a coffeemaker in his dressing room and he was ejected from the studio. 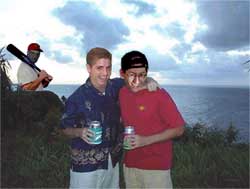 GeistEditor lurks in the background while Lowtax and Frags share a couple brewskis in Hawaii!Following on the heels of episode 213's Wheel of Fortune win by Fragmaster, the gang heads off for some fun in the sun on the beautiful island of Oahu, Hawaii. Romantic sparks fly when Lowtax meets what he thinks is his dream girl at a Tikki bar, only to discover from Fragmaster that Rogerina is really Roger. Perennial cut-up Fragmaster adds, "and boy does he know how to hold a luau!"

Meanwhile, GeistEditor tries out his latest wacky scam on the tourists by hiding in bushes at the airport and then leaping out and beating people in the face with a bat while shrieking "aloha". The episode reaches its climax when guest star Nipsy Russell serenades the gang with an a-cappella version of Cannibal Corpse's "Hammer Smash Face".

WHAT YOU DIDN'T KNOW: A crew member can actually be seen getting eaten by tigers in this episode. Watch the upper right hand corner of your screen during the Hula sequence in the zoo.

Daisy's dreams of musical stardom are dimmed when the song she wrote is heard on the radio being sung not by GeistEditor, but by a sound-a-like. Lowtax and Fragmaster head to Atlanta to get to the bottom of the scam, only to find out that Boss Jain is tied in and that recording studio is a front for a music piracy operation which the Boss is trying to use to build connections to the Syndicate. A motor home full of "working girls" and two dynamite arrows later, the operation is destroyed, but Daisy is still out her fifty dollars... until the boys tell her that GeistEditor would be recording her song for real!

WHAT YOU DIDN'T KNOW: Both Jeremiah Flinthoff (Lowtax) and Babby Dougan (Fragmaster) perform their own stunts, but Alexi Metcalf (GeistEditor) is a huge pussy and when he sprained his wrist filming a slow driving sequence, he demanded a stunt double. After filming ended he was summarily murdered.

Having finally started to square things away with this miserable server, Rich "Lowtax" Kyanka is back with his newest article, "Know Your Neighbors... Without Ever Meeting Them!" This hard-hitting and in-depth study takes a look the scientific method known as "SRD," a process which allows one to build a profile of their neighbors simply by listening to their nonstop banging and breaking sounds that they cause around 3:00 am. Here's an example:

SRD EXPLANATION: Neighbor is coughing up vital pieces of his small intestines and spitting them into a large bucket he has placed near the foot of his bed.

NEIGHBOR'S PERSONALITY: Mind-bogglingly elderly man who is too busy staving off the Ghoulish Specter of Death to worry about all the noise that he's making in the process. This type of neighbor often succumbs to spontaneous coughing fits in the late hours of the night, during which time many key organs are vomited upon his World War II-era bedsheets. Since these types of people require hearing aids with the power of a car stereo amplifier, they are able to soundly sleep through these hackfests... although everybody within a 500-yard radius of their apartment won't.

Go read it! You know, because it's scientific and shit.

The ROM Pit of the Internet

Ooh, another ROM Pit review as well? You got that right, Bubba. The ROM Pit is back with a brand stinkin' new review of "Conan" for the NES, a game which features everybody's favorite challenge: JUMPING OVER A SHITLOAD OF PITS WHICH KILL YOU IF YOU FALL INTO THEM!

Conan starts the game in Hell. How do I know this? There are flames, demons, and flaming demons everywhere. Plus Satan makes a brief appearance so you can steal his pitchfork, but I'll get to that later. After running past the edge of Hell, the game shifts to Greece. As far as I can tell, the plot of this game is that Conan has taken up a quest to run around like a complete retard in various and seemingly random areas of the world. While he does that, I'll take up an equally noble quest: punching myself in the groin until I vomit and lose consciousness.

Sounds about right. Conan commands you to lavish him with praise!