While the late Antonin Scalia will mostly be remembered for his 30 years of service in the United States Supreme Court, he was also a closeted gamer for the latter half of his life. In honor of Mr Scalia's untimely and unexpected death, let's take a look back at the impressive achievements of the man who gave the power of the First Amendment to video games. 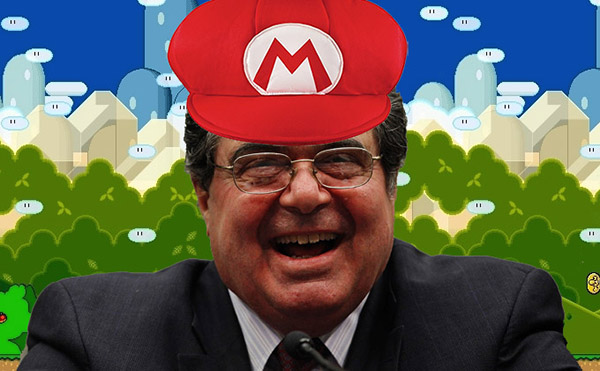 After three playthroughs over the course of 93 non-consecutive hours, Antonin Scalia finally unlocks the last of 45 playable characters in the Squaresoft PlayStation RPG, Chrono Cross. In his currently unpublished memoirs, Scalia lists this act as "One of the greatest achievements of my life," adding, "Even though most of these people are trash." Scalia's colleagues described him as "positively beaming" on this day, which is likely why he felt so confident in his decision to stop the 2000 ballot recounts in Florida and ostensibly give George W. Bush the Presidency. What a guy!

Most will remember Scalia for his brilliant mind, but few will ever know just how hardcore of a gamer this Supreme Court Justice truly was. Being no stranger to challenges both inside and outside the courtroom, Scalia persevered for months and nabbed the final Demon's Souls trophy on January 21, 2010, when he remarked to fellow Justice Ruth Bader Ginsburg, "Even in New Game +7, that Maneater is still a huge pain in my dick." Scalia must have found the experience rewarding and wanted his fellow Americans to triumph against the same sense of adversity, for it was on this day he helped decide that corporations are people. Life sure sucks for us now, Mr. Scalia... now how about some cheat codes?

Antonin Scalia was one of the first members of the Supreme Court to purchase and use a personal computer, if only to build his utopian SimCity where taxes for rich people sit at a healthy 0%. But he also liked his action games as well, and played 3D Realms' FPS Duke Nukem 3D religiously while not hard at work for the United States of America. In fact, he was such a fan of the Duke Nukem character, at a dinner party he cornered George Stephanopoulos and told him "I'll rip off your head and shit down your neck." But Scalia's love affair with Duke eventually ended when he finished the game on the "Damn I'm Good" difficulty setting on May 20, 1996. He must have been feelng Duke's macho vibes, because on this day he also helped prevent local jurisdictions in Colorado from passing laws that would prevent discrimination of LGBT people. Hail to the king, baby! 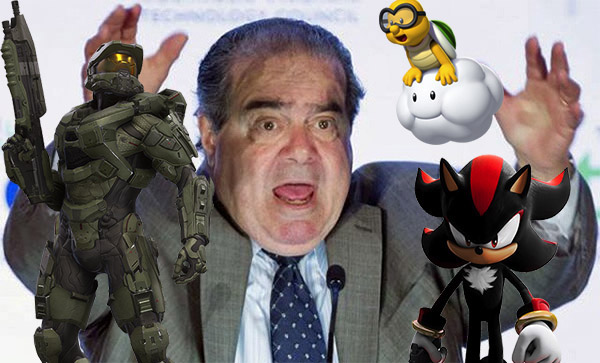 Scalia, being a champion of free speech, embraced the envelope-pushing nature of Grand Theft Auto from the outset -- and 2002's Vice City stood as his personal favorite. At his wake, Clarence Thomas recounted a remark Scalia told him about Vice City: "It reminded of me when I was still in my 50s, and the coke at Supreme Court parties was still the good coke." During those anxiety-ridden, post-9/11 years, Scalia was known to pull all-nighters with the GTA series, often coming to work in the same robes he wore the previous day. This obsession came to an end on June 26, 2003, when Scalia finally achieved a 100% completion rating in Vice City. The Supreme Court Justice was so fired up by this achievement that, later that day, he dissented against a ruling that would make sodomy legal in Texas. You think you can mess with this Justice? In the words of the immortal rock band and Vice City soundtrack stars Judas Priest, You Got Another Thing Comin!

While many would describe Antonin Scalia as "feisty," "arrogant," or "a real pile of shit," he was known for one quality above all: his competitiveness. And this character trait found an outlet during last summer's Supreme Court Smash Bros. tournament, in which he trounced Associate Justice Anthony Kennedy in the final bracket using Falco and just one life. A known showboater, Scalia was known to parade around the U.S. Supreme Court Building, bellowing "ONE MAN! ONE MAN!" following such wins as a way to gloat over his opponents after giving them such a large handicap. Coincidentally, Scalia believed strongly that marriage should be between one man and one woman, which is why he openly dissented about giving homosexual couples the right to marry shortly after claiming victory in this tournament. Talk about walloping non-traditional marriages with a judicial falcon punch!