America faces serious economic and cultural problems. I have a solution, but it requires goats. Lots of goats. 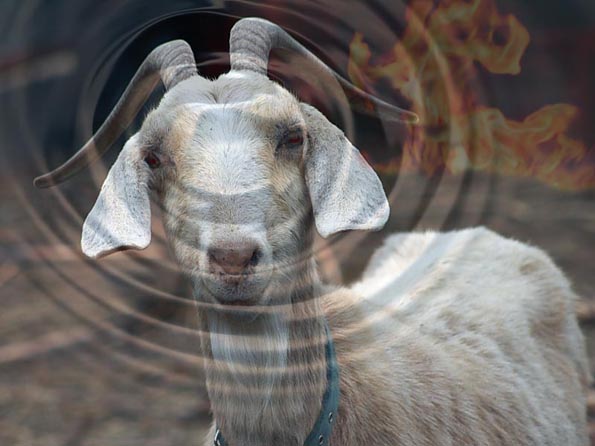 Webster's dictionary defines scapegoat as "a goat upon whose head are symbolically placed the sins of the people." These days, you can't cast your search-engine fishing line for "scapegoat" without impaling celebrities on your hook. Kanye West, President George W. Bush, Brett Favre: All America's heroes have been used as scapegoats according to the Internet. So if all these big names are bearing our sins, then why is our society in such bad shape? Because in most cases, these articles were just about the famous people, and not about actual goats that had been named after them who were being ritually slaughtered for the greater good. (Google, 2009)

Some people might say that people stopped sacrificing goats way back in Bible times, and that these days "scapegoat" is just like a metaphor. But those people aren't paying close attention to world news. In 2007, Nepal Airlines officials killed two goats to make their sky god happy. After they did this, their broken plane started flying. There's a reason why you only hear about Nepal when people are talking about its flute music, spicy condiments and beautiful national flower the rhododendron: Scapegoating works. (BBC, 2007)

Even the recent movie "Drag Me to Hell" depicted a scapegoat, though it did so very inaccurately, probably because Hollywood vegetarians want to scare people away from performing a proper sacrifice. In the film, a psychic tried to transfer the curse placed on a woman to a goat during a séance, then kill the goat when the demon moved inside it. Her timing was off, and the goat said some bad words, and the cursed woman ended up suffering the eternal torment of the underworld. But according to my research, it is extremely unlikely that the sacrifice of an actual scapegoat will result in these circumstances, no matter how badly the ceremony is botched. (IMDB, 2009) 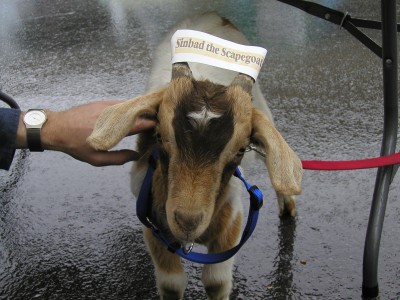 Society atones for "Jingle All The Way."

Some people that I've talked to about this idea have said that it would never work, and that scapegoating is "barbaric." One of my classmates also argued that goats are cute. Well, Sarah, goats aren't as innocent as you think. I found out that heavy-metal bands use them to mean Satanic things and worse. There is a group named Goatwhore. There is a song called "Goat Sodomy." And parents have kids touching these filthy things at petting zoos!

Another complaint is that goats are an endangered species. But actually, only foreign kinds of goat are endangered. It would take too much time and travel to find these kinds, plus they're probably really hard to catch because they're so good at climbing. By contrast, the American goat is plentiful and expendable. People used to bring goats over on ships from Nigeria as food for lions. I don't know why our country needed to feed lions at some point in its history, but if we could use goats for that, we can certainly use them to take away the sins of our land. (Amazing Facts, 2009)

It has been observed by cultural anthropods around the world that sacrifice is a universal practice. Every culture, probably even the founding fathers, sacrificed animals and humans to "appease the gods." When America gets away from what everyone has always done, this is where we start to have problems. (Animal Liberation Front, 2009)

The Bible isn't really clear about where God stands on goats. In Psalms 50: 13-14, God says "Do I eat the flesh of bulls, or drink the blood of goats? Offer to God a sacrifice of thanksgiving, and make thanksgiving your sacrifice to the most high." I think what He is saying is that people can only sacrifice goats on Thanksgiving. Maybe this is what Americans used to do, before they got lazy and began using turkeys because they're easier to prepare. (The Bible) 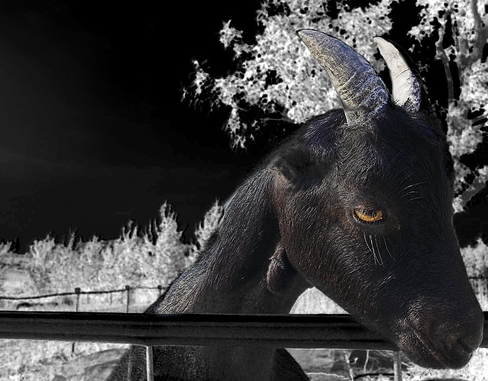 The word "scapegoat" originally comes from the Bible, where it was created by mistake. A translator in 1530 thought the word "azazel" meant "the goat who departs," or "escape goat." Really it means something completely different, because modern Hebrews use it in place of Hell in sentences like "go to Azazel" and "what the Azazel?" So I guess it turns out the real word should be "Hellgoat." Still think this terrible animal is worth saving, Sarah? (Wikipedia, 2009)

In closing, I would like to briefly mention a little-known practice that goes hand in hand with scapegoating: sin-eating. A sin-eater swallows all the sins of a dead person by eating a meal from a bowl placed on the corpse's chest. After this, people want to avoid the sin-eater because of all the evil inside his stomach. Sin-eaters used to be hard to find, but unemployment and homelessness have provided the country with many starving volunteers. No one is damning these people, the sins can just be passed from one derelict sin-eater to the next. It has been suggested that no one will eat the sins of the final sin-eater in the chain, but that is actually the beauty of this plan. The last sin-eater will be so malnourished that he will die despite the meal, and the sins will die with him. Then the cycle can begin anew.

Thanks to Videodrome for the opening illustration!