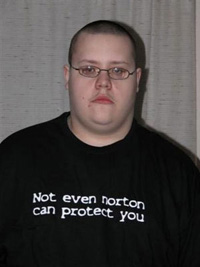 Are you the kind of person who knows more about the Star Trek universe than our own? Do you regularly order more than five kinds of meat on your personal pizzas? Did you ever get severely winded as the result of staying mobile for more than 20 minutes during a local "zombie crawl?" Well, there's good news: if you're in need of overpriced novelties to use as an extension of your terrible, repellent personality, look no further than the gilded pages of ThinkGeek, which has been making Christmas stockings smell mysteriously like man-made bacon chemicals since 1999.

Yes, Internet jokes no younger than 18 months emerge in physical form over at ThinkGeek, because this company has apparently made it their mission to turn otherwise harmless interests into manifestations of pure psychosis. What follows are the worst offenders of a site that offers a messenger bag embroidered with some Dungeons & Dragons shit as its most dignified product.

Hey, slugger. Welcome to your new life as a human being. Thanks to this Star Trek feeding kit, your developing mind will forever associate the Starship Enterprise with the most primal, lizard brain pleasures, like eating fruit and vegetable goo out of tiny jars with baby heads drawn on them. By the time you are made to dress as Spock, Age 2 at your first convention, the subject will be closed. And you can thank ThinkGeek for enabling your parents' creepy proselytizing before you could even control your bowels. Every human being has the right to choose for themselves the complicated, pointless bullshit they obsess over, and this officially licensed product ranks up there with the recalled plastic nipples modeled in the shape of Jar-Jar Binks' rubbery eyestalks.

If watched Futurama during its original run, you know the Hypnotoad was one of those great jokes that blindsided you with its absurdity. When the series came back from cancellation, every third episode seemed to have this character pop up in an unnecessary cameo -- which left viewers feeling less sick and hollow than you'd think. A surprising portion of an audience for a show like this watches it just to grab screenshots that they can later drop Impact font text onto and send out to social networks like wedding invitations, so a life-sized Hypnotoad figure could likely inform passersby of certain social risks. Nothing screams "I'd like to overexplain a joke I saw on TV ten years ago" like this vinyl totem of the damned. 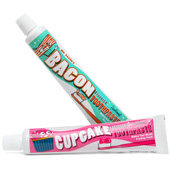 Move over, bacon soap; you've got a partner-in-crime, and that crime is making a person swab meat flavor on their body in a misguided effort to smell less disgusting. If anything, this product proves that the obsession with consuming animal products to compensate for a lack of masculinity can easily lead to a rational person cleaning their teeth with something designed to taste like pork fat. And let's face facts: whoever would intentionally message synthetic bacon ointment into their gums definitely isn't using the cupcake flavor for its intended purpose; instead, they're sucking it straight out of the tube like a spicy, adult version of Go-Gurt. Consider this gift for that family member you know would like to try the dog's toothpaste, but can't handle the social repercussions of being caught.

Worst Use of Text on Fabric: Bazinga Shirt 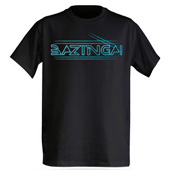 Somehow, a sitcom with the overall dignity of a two-season TGIF show took the world by storm with its accurate depiction of nerd culture as imagined by jaded, 60 year-old comedy writers. With a steady stream of references to comic book things they see on billboards during their commutes to work, these talented souls have captured America's heart -- and showed a skeptical audience that the tragedy of autism can lead to some pretty heartwarming moments. This shirt will prove to the world that you think of CBS as more than just a thing your grandma fell asleep to if she babysat you on the weekend. No; the three-camera sitcom is back, and this time, its built-in merchandising will have more lasting power than your Do the Urkel Dance Mat and Cody from Step by Step Action Van with Kill Room. 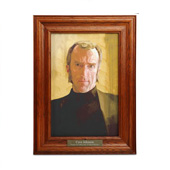 Need something to hang next to that print of "The Starry Night" you got when the framing shop in the mall closed down? That sun-faded Donnie Darko poster may delight the eye despite being more worn than a treasure map, but surely something grander could anchor the room. If you happen to be in need of some interior decoration, this Portal 2 Cave Johnson Talking Portrait acts as a conversation piece, and a constant reminder of that time you played a video game. And, if necessary, its 13 included phrases can help drown out the voices of anyone who finds you hanging this on their wall.