Some Lesser-Known Inventions of Benjamin Franklin 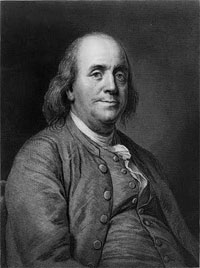 In the annals of history, few men have had as great an impact on the human condition as Benjamin Franklin. If we were to get specific and name those other few men, they would be Imhotep, Caligula, Robert Oppenheimer, and Jakob Dylan respectively. But this article isn't about them. This article is dedicated to Ben Franklin, a man who played a vital role in not just shaping our beautiful country, but also in establishing it as a land of unparalleled innovation and technological prowess.

Franklin is most famously known for inventing bifocals, which enabled bisexuals to see the error of their ways. Other famous inventions credited to Franklin include lightning rods, mints, odometers, and fire departments. While he wasn't the first man in the world to store urine in a mason jar, he was the first man in America to do so.

As most of you are aware, Benjamin Franklin recently passed away. In honor of his passing and in celebration of his astonishing contributions to the realm of invention, I thought we might spotlight some of his lesser known creations.

The Mechanical Bull
Franklin endured many years of mental toil as he sought to make this device a reality. His earliest versions relied heavily on steam, which produced an abundance of heat and often lead to riders sweating profusely, fainting, or suffering serious burns.

In one incident, Franklin convinced John Adams to ride one of the early mechanical bull prototypes. The exhibition left Adams with severe burns to his buttocks, and very nearly brought the two great titans to blows. Subsequent attempts were entirely too lifelike, and often trampled or gored the ejected rider. Many of these accidents were lampooned in incendiary political cartoons and pamphlets that portrayed Franklin as a mad scientist.

Finally, in 1783, Franklin perfected the device. Through crude in comparison to today's mechanical bulls, one can easily see the similarities. Franklin was greatly discouraged when America's burgeoning medical community failed to embrace his finalized bull, which he felt was vital to maintaining bowel regularity. Demoralized, Franklin abandoned the project and never looked back. In an ironic twist, Franklin himself would later succumb to an impacted bowel.

Hair-Based Liquor
Franklin, a chronic imbiber of spirits, devised a unique alcoholic beverage made from fermented hair. At first he employed dog fur before determining that the best possible hair to use was that of the prepubescent children of the landed gentry of Philadelphia. Franklin was never able to convince another living soul to try his concoction, and so he moved on to more promising endeavors. It is believed several casks of the substance still remain, lost amongst the many artifacts of American history. 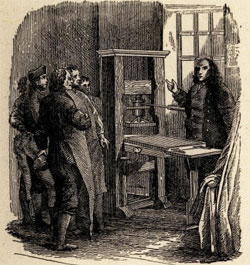 Another of Franklin's lesser inventions: the mechanical blog.The Crotchless Bee Suit
Franklin briefly became infatuated with the practice of beekeeping, but was troubled by his inability to get up close and personal with his subjects without getting stung. It did not take him long to scheme one of his most useful inventions: the bee suit.

This protective covering included a mesh veil and gloves. Unfortunately, Franklin designed the suit with one fatal flaw. Due to his frequent need to urinate, he elected to make the suit not cover the area surrounding the crotch.

After one particularly bad experience, he shelved his bee suit and instead created the first modern medical catheter. This seemed to solve his urination problem, and gave him a renewed sense of vitality and confidence. Subsequent bee aficionados would later perfect Franklin's design, adding much needed protection to the crotch region.

The Wind Tunnel
Franklin's greatest pleasure came from feeling a cool breeze blow upon his naked body. Frustrated by the unpredictability of the weather, he sought to construct an apparatus that would allow him to feel a cool gust whenever he so pleased.

At first he designed and fabricated very simple fans, but they failed to deliver the intensity he desired. His eureka moment came while vomiting in a narrow alleyway outside a pub. The winds seemed to grow stronger as they moved through the narrow canyon between the two buildings. Almost instantly Franklin stripped bare, holding his arms aloft in triumph as the rushing flow of air gave him the exact amount of pleasure he craved.

Soon he was at work in his laboratory, constructing a narrow tunnel with a large spinning fan at one end and a comfortable sitting chair at the other. Friends and historians agree: Franklin spent upwards of six hours each day reclining nude in his wind tunnel. This is why so many busts and paintings depict Franklin shirtless and with hair pushed back.

Hundreds more inventions were authored by Franklin, but there are simply not enough Something Awful updates in the world to document them all. His legacy cannot be denied, and any Franklin legacy deniers you encounter should be vigorously shunned. It is partly because of Franklin's unbridled industry that we are the remarkable nation we are today, and also why each year we offer up a human sacrifice in humble tribute to his greatness.

Thanks to Guapo Hussein the Street Cactus for offering valuable aid and comfort in the creation of this article.