Secrets of the Comic Book Industry

While most updates at Something Awful center around cornerstones of geek culture such as video games, masturbation tips (#1 - no punching), and internet life in general, they tend to ignore comic books altogether. Yes, comic books; our flammable friends that have been there for us since childhood. Where else would we have learned that no one should ever own a gun, but that choosing to wear spandex and throw people through walls is perfectly acceptable? Nowhere, aside from professional wrestling and maybe Richard Simmons. Comic books have always been there for many of us yet they continue to get the cold shoulder, even on this very site.

Back to the point, though. As a comics industry insider, I've come to learn a number of secrets so shocking that they would even surprise the people I made them up about. In fact, I'd go so far as to say that I know more about comic books than Gary Condit knows about getting away with murder. As Spider-Man would say, "really?" Oh Spider-Man, you card! Yes, really! Will your wisecracking hijynx ever stop? Since I am a man of absolutely no morals (and frankly have nothing better to write about), I've decided to share the entirety of my scandalous comic book lore with you. Enough with this setup, let's get right to the action! Or as Gandhi would say, "It's clobberin' time!" 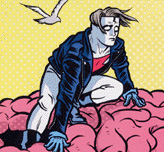 This is Mike Allred's Madman, perched on top of a gigantic floating brain. You need to read Madman.

Comic books were accidentally invented by Albert Einstein sometime in the 1940's. At the time, they were simply a byproduct of Einstein's failed attempts to create the light bulb, a device which Thomas Edison -being the crafty bastard that he was- then proceeded to patent sixty years earlier.

Although Batman is the world's greatest detective, one case proved to be too difficult for his finely-honed deductive skills. What is the mystery that haunts Batman to this very day? The unsolved case of "Who Let the Dogs Out?"

The legendary creative team of Stan Lee and Jack Kirby collaborated on a project which they planned to call The Incredibly Gay Hulk. This was long before homosexuality was as socially accepted as it is now, and the executives at Marvel asked for the name to be toned down. The comic's creators had no choice but to give in to this blatant homophobia, so the book's name was changed to The Pretty Gay Hulk. After a bitter copyright infringement suit filed by Michael Moore, the name changed once more, becoming The Incredible Hulk that we all know and love.

Aquaman is widely regarded as a close friend to all aquatic life, yet he exclusively commands dark-scaled fish to do his menial and labor-intensive tasks. Gefilte fish are given cushy executive positions in the lucrative underwater film industry, over which they rule with an iron gill.

Not all comic collectors are antisocial rejects who rarely leave the house and smell "weird". I, for one, smell "icky". 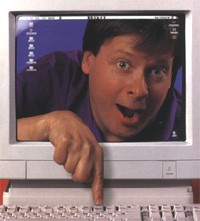 Dave Barry has nothing to do with comics, but I heard he might read this site. This is him deciding to be my best friend forever after reading this update (in cyberspace).(on the internet)

While particularly high on magic marker fumes one day in the 1960's, Marvel's chief editor Stan Lee pitched an idea for comic books that would be made without ink. According to Lee, stories would be transposed onto comic pages using the "waveforce of the universe", and readers would use their untapped psychic powers to decode them. As you can probably guess, the idea was a huge success and netted Lee untold fortune and power. To this very day, Lee perches atop his diamond castle on the moon and watches over us all with a cold and predatory eye, waiting for the perfect opportunity.

Superman can:
Fly, perform feats of incredible strength, and move at near-light speed.
Superman cannot:
Ride a bicycle. Every time he attempts it, homeboy gets no more than five feet before losing his balance and falling over.

It was never publicized, but a Silver Surfer film began production some years ago. The project came to a terrifying stop, however, when the crew realized that covering a living man in molten silver was not the best solution to their makeup problem. Somewhere in Hollywood, a very shiny man is buried in a shallow grave along with one of the greatest scripts of all time.

You may think that making comic books is an incredibly easy process that simply requires creators to "come up with lame stories and draw them like any kid in middle school could". In reality, you're exactly right.

You probably know that Neil Gaiman is the writer of the groundbreaking and legendary Sandman series, alongside authoring numerous award-winning novels. What you don't know is that he's also the Chicago Cubs fan who arguably ended the team's season by reaching out for a foul ball that was still in play. Try writing yourself out of that one, wordass.

Collecting comics for profit is a complicated venture, especially when it comes to your collection's worth. The value of each individual comic book is dictated by its rarity, condition, and the last known status of Regis Philbin's hair.

Comic shop law dictates that there must be a tabletop gamer present in the back of the shop at all times. His duty is to size up customers as they come in, and either scoff at their non-geektitude or nod approvingly. In case of an emergency, a gruff employee who never looks up from his collection of Magic cards unless it's absolutely necessary will serve as a replacement.

Surprisingly, Spider-Man's greatest foe is neither the Green Goblin or Doctor Octopus, but a crippling addiction to child pornography.

Armed with this insider information and a flamethrower, you'll now be able to fend off any zombie that (for some reason) doubts your comic book knowledge. That is, as long as it's a slow zombie like the ones in Night of the Living Dead, and not a scary-fast 28 Days Later zombie. Now that I think about it, those weren't technically zombies at all so they don't count. Yeah, you should be fine.

My spider senses are tingling and that can only mean one of two things! Either it's time to introduce this week's State Og, or there was more to last night than innocently getting drunk and waking up in a barn with my pants missing. Check out this excerpt while I try to determine which of the two it is:

Sponsored by long-time Dallas favorite Larry Hagman, this dressing is not only the perfect food, it's also the perfect toothpaste! That's right: clean as you chew! Your meal will not only be delicious, but also foaming and minty! The top of your head will melt off somehow before you get a gum disease!

You go ahead and read State Og while I make an appointment with the clinic.